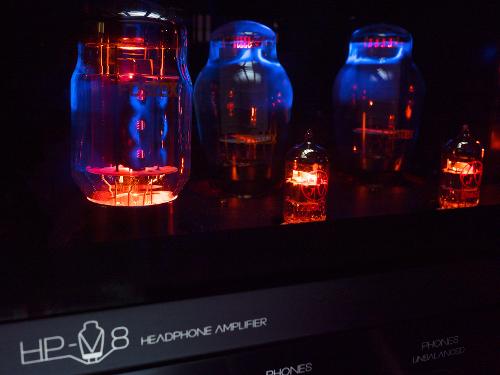 Fostex has made desktop integrated DAC/Amps before with their HP-A8, HP-A4BL and compact HP-A3. The HP-V8 is a different beast altogether. It's a tube amp using 300B, KT88 and E88CC tubes and is as large as some speaker based amplifiers. It's almost like an announcement that Fostex is stepping into the high end desktop amp market and is making a clear statement "We're in the game too".

The HP-V8 comes in very well packed and huge box that weighs 31kg shipped. Its inputs at the back are simple - just a 3 prong power, and L/R RCA unbalanced inputs. The power switch is also at the back. On the front however there is a standby button, and 2 headphone jacks (balanced XLR and unbalanced 1/4" with a toggle switch to go back 'n forth between the two). The selector switch supports Low/High Gain for Low Impedance, and Low/High Gain for High Impedance, and a large volume knob.

The touch and feel of the knobs and switches just oozes quality. In many ways it reminds me of the feel and knobs of the Accuphase integrated amp I used to own. During operation, the unit does get warm but the cage is well ventilated with the tubes set decently enough in the middle that if anyone touches the front perspex, they'll feel a slight warmth but not burn themselves. The top mesh on the other hand is much warmer naturally. On my table, my kids won't be able to reach the top panel anyway.

I don't have a lot of experience with proper desktop amps as in the past I had owned the more integrated DAC/Amps like Benchmark DAC, HP-A8, and currently my setup is the Invicta v1.0 feeding into a very customised Eddie Current Zana Deux (ZD). It should be noted that the mods done to the Zana Deux brings it into something in between a Zana Deux Special Edition & the newer Zana Deux Super but tailored quite specifically to the TH-900 to my liking. The headphones I have at my disposal too iare my single ended TH-900, and a loaner balanced TH-900 from Fostex too. I'm using Audirvana Plus v2.4 USB into the Invicta, and SE out to the ZD which acts as a preamp into the HP-V8 too. My customised ZD is my baseline and I use almost exclusively in its 3 ohm ZOut mode on the TH-900.

Probably one of the most immediate noticeable difference I find in the HP-V8 against my customised ZD is the HP-V8 simply produces a huge sound so effortlessly. It lives up to the image that it is a big amp producing big sound so easily. In comparison, say the DAC/Amps I had before, I feel those have to "pushed" and almost sound "strained" to produce that big sound. My ZD being a dedicated amp with a dedicated separate PSU, doesn't feel strained in producing that big sound however it doesn't feel as effortlessly as the HP-V8.

The presentation is airy, articulate and very smooth, with a nice full low end in the bass range. The tube signature just renders the bass with a nice vibrato-like texture and layering. Music just breathes and fills that large virtual space the amp creates for the headphones. By comparison the ZD feels somewhat more intimate and (possibly due to the 3 ohm output impedance?) the bass doesn't fill in as much as the HP-V8. The amp also seems to smooth out some of the treble peaks I hear in my ZD.

Comparing the single ended and the balanced XLR output, the later provides just that additional larger soundstage and instrument separation. I heard some sounds I hadn't heard before in tracks I'm very familiar with and for the moment was wondering if I was picking up connection faults in the socket connector and later realised it was repeatable and not so obvious in single ended mode until I knew what to look for. The benefits in balanced mode is just that much more obvious.

Sonically speaking, I don't think there's anything I can fault in the new Fostex HP-V8. I wish I could keep this amp and I even wonder if the TH-900 headphone is a bottleneck to what the amp can do. Sadly I don't have any other high end headphones (like the HD800S which I'm so tempted to procure just to try it out on this amp!). At least to my ears, the flaws to the amp aren't sonic. The physical size/weight and cost aspect would probably the main deterrents for one to buy and own such an amp. In terms of return on value (RoV), I think it would be hard to justify. Whilst it's clearly a step up from my customised ZD, I don't know if I personally would feel if its RoV is 4x the cost of my ZD. But if money is no object and desk space is not a premium, the HP-V8 would be a very satisfying headphone amp.
Reactions: zolkis, Articnoise, Hawaiibadboy and 1 other person
View previous replies…

Canadian411
sry if i missed, how much is this ?

Galvanic
As far as I know this is the first review in English of this amp, and it's interesting that the other closely audited review I am thinking of (in German, links in Google) also mentions that 'if you hear it, the only problem is that you want it'!
So I am wondering if this seductive quality of the Fostex hp-V8 is something that could wear of, like a holiday fling, or does it have a lasting bliss factor, like a marriage made in heaven!
I guess the only way to find out is to get one and see.
Thanks, AnakChan for keeping my interest in this amazing pirce of kit alive.

ukaudiophile
Got to briefly hear this beast a couple of months ago. Great review.
Read more…