FCN-10 is a modern device for sophisticated owners of high-quality, demanding headphones. The experience gained in previous projects, led us to create a compact in size, but not at the capabilities a “combo device”. The FCN-10 advantageously combines: a high-quality DAC, a streamer and a the same class A powerful amplification circuit design as the gorgeous FA-10 amplifier. Just enjoy streaming services or home content thanks to the high-quality implementation of the digital board and interfaces, combined with unlimited amplification possibilities enclosed in a classic design compact chassis 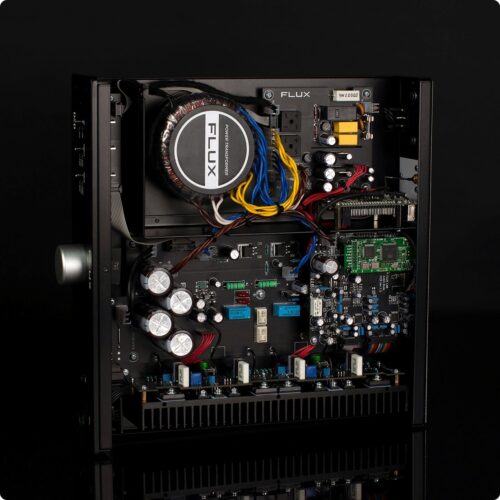 Flux FCN-10 is a powerful DAC/AMP pushing 16W of power into 32Ohm, and it can also work as a streamer using DLNA/Airplay. It is priced at 1299$.

Sound quality for the price

Flux FCN-10 comes in a standard, brown box with a small set of accessories inside. Inside you’ll find only the AC, Ethernet and USB type B cables. That’s not much, but with a monster like that, you won’t need anything else.

The packaging is pretty simple, even basic. It’s not a bad thing though, as it’s what’s inside that matters the most.

Flux is made of metal, painted black with a silver, matte potentiometer on the front. It weighs over 5kg (11,5lb). It is very stable with nothing to complain about. Every single connector is very stiff and solid. All three switches work pretty hard, with a loud click, but it’s a satisfying sound for me. It is absolutely a top build quality.
After some time, the device gets warm, but it wouldn’t shock anybody because it is a class A amplifier.

The design is raw and simple, and i really adore this kind of approach. Flux looks professional, powerful and reliable, it is built like a tank and you could probably use it as a melee weapon when in danger (i highly suggest not to do it though).

DAC, AMP, a streamer. Do you need more?
The primary function of FCN-10 is a DAC/AMP mode. We have a USB input, RCA input, RCA output, and two headphone outputs. The first is a regular 6,3mm jack, and the second one is a balanced XLR output. So, basically, all you need. This set is in FC-10. FCN-10 has more inside, it can work as a file streamer with 2 USB for external hard drives, a WiFi card, and an ethernet connector.

What’s worth mentioning is the power of this champ – it bursts up to 16W of power out of the balanced, 4pin XLR, which is absolutely ridiculous. There are no headphones that this giant couldn’t handle in terms of power requirements. So, even if you have a really power hungry cans like the Hifiman Susvara, Kennerton Odin – you’re all set. For life.

As for the streaming capabilities, it launches after selecting the LAN option on the middle switch. In the same moment, the USB connectors are turned on. Using them and external HDDs, the Flux can work as a simple player using the Moode software.

Flux FCN-10 is enormous not only by its dimensions but also because of its sound quality. It has a linear sound signature, with a lot of power, such a fabulous dynamic, round scene, and overall calming manner. It is trying to neutralize all the headphones specificities to make the sound flattened, so some of you can miss a little bit of the fun.

When it comes to the possibilities of driving, you can be sure that your headphones will show 100% of what they can do — this power-beast drive up Kennerton Odin without any problem, on both SE and balanced outputs.
The bass is speedy, plays straight to the point. It is highly texturized, kinda neutral, but without such a powerful and round strike. It is really hard slamming, it doesn’t linger with the kick. After all, the bass isn’t a leader here, but it is definitely noticeable in the overall sound signature. I love its width, it goes from all around in a concert style.
It all sounds perfect with older jazz, especially when the double bass comes in. Good, old funk also sounds terrific — Rasputin by Boney M. is incredibly fast and pleasant to listen to. Same as all metal and rock type genres, they’re fast and definitely can enamour fans of those genres.

The midrange is pretty natural and very engaging. Vocals are almost always at the front, with a lot of texture, without any dryness. Michael Kiwanuka’s voice sounds like a small concert in the club somewhere in the basement. It is very intimate in a good way, close at the front, same for Ray Charles, but he’s a little deeper on the scene. Also, female voices, like Nina Simone are lovely, very charming with the concert feeling. Details in the midrange are fantastic, you won’t skip anything in the music, and it doesn’t matter if you prefer smaller realisations or symphonic concerts with many instruments.

The treble can shock with its timbre, which is smooth in the longer parts, but a little sharp with more clicky sounds. It is very, very detailed, but not brightened, maybe a little flat, I would say. I didn’t notice any sibilances, it’s just a gentle and very correct treble. Overall the treble is very clean and tight. I think my favorite song here is “Billie Jean” by Michael Jackson, even if I’m not his big fan at all, but that one is incredibly good here. Thanks to the godlike driving ability and pureness of the sound, prepare for some slight sharpiness if you pair it with the headphones that are very treble-forward.

The soundstage is specific. It is very round, great directed, without such a black background, with prominent in-music holography and imaging, which isn’t that good in games or movies. In the music, it’s genuinely fantastic, with almost unreal distance distinction and fabulous 3D feeling.
Still, it is all placed at the same distance in games, which isn’t really helpful in competitive gaming.

FLUX FCN-10 is a true beast of a device. It’s a DAC, AMP and a streamer – all of which are of very high quality. The raw power and driving capabilities makes it an absolute monster of an amp, which will make all the headphones on the market sing with ease. Overall, its a stellar device with a very competetive price, regarding what it’s capable of, and the functionality that you’re getting.


Gear used during this review for the sake of comparison and as accompanying equipment: