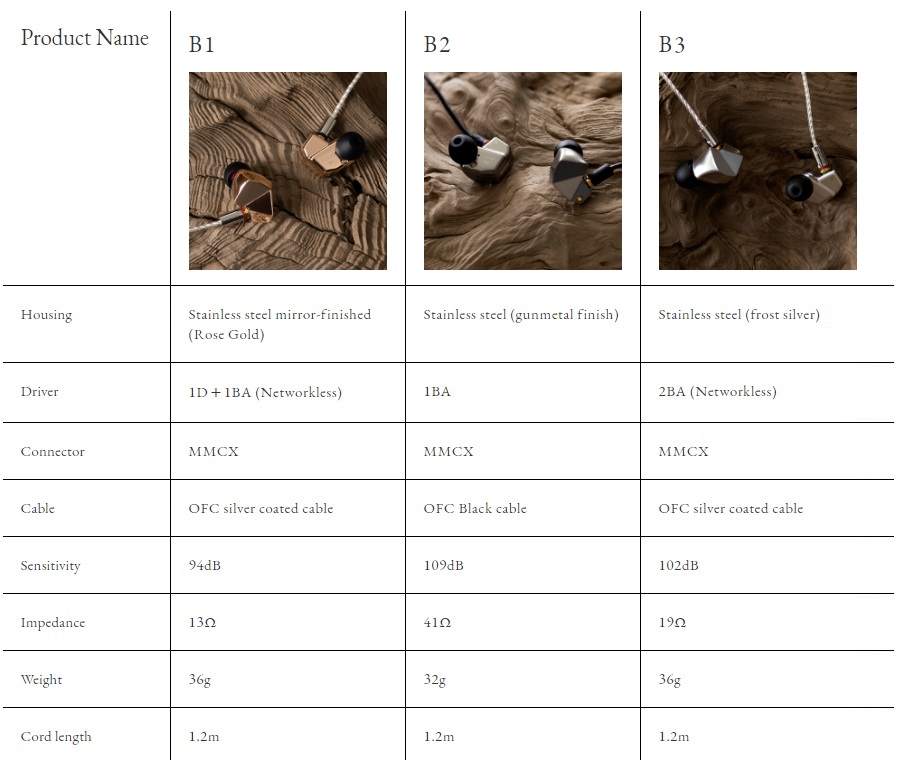 S’NEXT is a company that sells high-end audio earphones and headphones under its own brand “final” as well as conducting component technology development, product planning, design, planning, manufacturing and sales of other companies’ brands.
The company was established in 2007 in Japan.

The B series is a new engineer driven product series that productizes each of the latest research results. Series concept and retail price are not bound in a hierarchy, productization is by order of development, so product name and numbers reflect the order of development.

The B1 is currently the most expensive model among the 3, while B2 is the cheapest and B3 at the center. The naming of B series is not following any pattern but simply the development sequence.

Now I will compare the final B2 with the B3, which have a quite different sound tuning.

PS: The Final B1 will be send to me with a short delay because of a production shortage. I will update the review and will add the B1 once I have compared it with the B2 & B3.

The Final B2 and Final B3 was provided to me by S’NEXT free of charge for review purposes. I am not affiliated with S’NEXT or any third person beyond this review and these words reflect my true and unaltered opinions about these products.

S’NEXT doesn’t sell its products directly. You can find the list of the dealers for the international market bellow;

Both the Final B2 and the Final B3 came in a pretty plain rectangular cardboard box in white color with product and Company brandings in gold color.


The box of each model is containing the following items/accessories;


The package of both IEM’s is including 5 pairs (comes in 5 sizes – SS/S/M/L/LL) E type silicon ear tips which are very comfortable to insert in to my ear channels. If you look on the back of each pair, you can see that it differs in colors. The gray indicates left and red is for the right ear pieces.

The carry case that is included in the box of both IEM’s is made of silicon and the cables can be rolled up and stored easily in it. The earphones themselves are gently secured using thin dome-shaped silicon covers.

Both the Final B2 and the Final B3 sharing the same design language with a prism like/prismatic shape that reminds to an origami, while the main difference is the color and surface appearance of the monitor shell.

Both the B2 and the B3 are made of a special Metal Injection Molded (MIM) stainless steel material, which is processed by powdered metal that is mixed with a binder to form a resin in the desired shape and applying high-temperature sintering to achieve the desired form.

The reason why Final used this material is the high degree of freedom in molding the resin into the same shape as the cast, making it possible to achieve a complex internal design even with metal.

On the front surface of both IEM’s is a fixing screw in gold color.

At the inner surface of both In-Ear Monitor shell is a screw, a small vent, the sound nozzle, product brandings and L & R markings.

The sound nozzle of those IEM’s is slightly angled and has a relative short elevation with a fine filter on the top to prevent the insertion for dust, ear-wax, etc.

At the backside of both monitor models is the product article number.

On the top of the Monitor shells are the MMCX (Micro Miniature Coaxial) female connectors. The connectors are quite robust and offer a tight and save connection.

The overall build quality of both In-Ear Monitors is rock solid!

Both, the Final B2 and Final B3 have detachable cables with MMCX (Micro Miniature Coaxial) connectors which are developed in-company. The main difference is in the wire material, look and feel.

The cable of the Final B2 is made of a high purity OFC (Oxygen Free Copper) wire and has a soft and flexible black PVC coating.

The cable of the Final B3 is made of a high purity SPC (Silver Plated Cooper), while the other insulation film is made from PFA which was also developed by Junkosha who used their extensive know-how through the JUNFLON® brand to create the ultimate in low-permittivity material. The outer tube on the other hand is made from PVC for maximum flexibility.

The MMCX connector housing of the Final B2 is made of plastic and has right (R) and left (L) markings. The right connector sports a red ring for an easier identification.

The Y-splitter and chin slider of the Final B2 is made of plastic in black color.

The MMCX connector housing of the Final B3 on the other hand is made of metal (aluminum) and has also Left and Right markings and a red ring for the right and black for the left channel.

The chin slider of the Final B3 is made of transparent platsic material, while the Y splitter is made of metal in silver color.

The 3.5mm (TRS) single ended headphone jack of the Final B2 has an L profiled black metal housing, while the Final B3 has the same design, but with a mirror like finish.

The Final B2 and Final B3 offers a pretty comfortable wearing experience for my medium sized ears and I didn’t faced any discomfort in my ear concha.

The noise isolation of both the Final B2 and the Final B3 is on an average level, while it is quite acceptable for the use in relative noisy environments like metro, bus or train.

Both the Final B2 and the Final B3 are showing a relative low sensitivity of 109db @ 48ohm for the B2 and 102dB @ 19 ohm for the B3. They do sound quite good with sources like phones or tablets at higher volume level, but to hear the true potential of those IEM’s, especially the B2, I would advice you to use them with a small portable amplifier or a Digital Audio Player (DAP) with good amplification.

Albums & Tracks used for this review:

This review is written after a burn-in of approx 95-100 hours. I have used the stock silicone ear tips for both IEM’s, which were included to the package.

The Final B2 and B3 are similar when it comes to the design, while the sound signatures and the driver configurations are quite different. Btw, I do think that the design of the B series is much more esthetic compared to the E series.

The Final B3 has also a more neutral presentation compared to the E4000 which has the most neutral sound signature of the E series. Although the B2 is similar in some ways to the E5000 due to its high impedance, it doesn’t sound as detailed and balanced as the e5000 due to the configuration and driver limitations that shows impact to the treble frequencies.

The Final B2 shows an average subbass depth, extension and quantity. The rumble is not very high, while it is fairly controlled and soft in its presentation. It will satisfy most listeners with exception of bass-heads.

The midbass region of the Final B2 shows more emphasis and has more intensity compared to its subbass. The midbass have a strong slam effect and impact, while instruments like drums/snare drums are pronounced and bass guitars are full bodied and thick in tonality. There are no situations like the midbass hump or mixings.

The Final B3 on the other hand has a more neutral midbass character with less intensity compared to the B2, while it has the upper hand in terms midbass speed and transparency. Instruments like drums/snare drums have moderate intensity and are pretty fast. The Final B3 has the upper hand in terms of midbass speed and tightness.

The bass of the Final B2 shows in general an average speed and tightness compared to the Final B3 which is faster, tighter and more detailed. The bass of the B2 is a bit loose, but has the upper hand in terms of overall bass quantity due to the more pronounced midbass character.

The midrange is the focal point of the Final B2 and sounds quite enjoyable especially with slow songs and vocals. The Final B3 on the other hand, has a high price to performance ratio in terms of midrange clarity, detail and speed.

The upper midrange of the Final B2 and Final B3 has a strong emphasis and good extension, which is the reason why both IEM’s are pretty successful in terms of female vocal detail and extension. The main difference is that the female vocal tonality of the B2 is warmer and than the B3. The Final B3 sounds more balanced and controlled when I do listen to female vocals, while the B2 can do sound a bit uncontrolled and harsh depending to the record quality.

The Final B3 is superior to the Final B2 in terms of treble quantity, extension and brightness. The treble extension of the B2 is a bit short. Instruments like Hi-Hats and crash cymbals are more pronounced and have better intensity with the B3. The Final B3 shows a treble performance (extension, detail, etc.) that is well above its price point.

PS: I am not a EQ fan and don’t like to play with the stock sound of any gear, but the Final B Series, especially the B2 is very responsive to Equalizing and has shown some wonders with “HiBy Music’s MSEB” application.


Final Audio B3 versus FiiO FH7:

The midrange of both IEM’s is pretty transparent and detailed. Both are more successful with female vocals than male voices. The upper midrange and treble region of both B3 and FH7 is pronounced and detailed. The Final B3 has the upper hand in terms of upper midrange/treble extension and intensity.

The soundstage of the both IEM’s shows better width than depth, while the B3 shows a little bit more depth.

The soundstage of the Final B3 shows better wideness and airiness, while the Custom Art Fibae Black has the upper hand in terms of depth.


Final Audio B2 versus FiiO FA7:

The soundstage of the FiiO FA7 has more width, while the Final B2 shows better depth.

The Sennheiser IE400 Pro has he upper hand in terms of soundstage width and airiness, while Final B2 shows slightly better depth.

The company Final follows a new way with the design and functionality of its new B series In-Ear Monitors, while the B1, B2 and B3 reflects the company’s new understanding. This series features also for the first time (except the LAB II) multiple and hybrid driver configurations.

The Final B2 stands out with its entertaining tuning and mid-focused sound, while B3 has won my admiration with its neutral tonality and highly detailed sound. Both IEM impress moreover with their high craftsmanship, robust connections, fit, comfort and a wide range of accessories.