Pros: Good warm sound with Wolfson WM8740 soundsignature, Good stand portable amp, variable bass boost, long battery life, sturdy construction, 2 line out
Cons: Soundstage and Instruments separation could be better, after years of use can begin to have hardware problem, no firmware updates
I have the Fiio E7 since 2 years and he's alsways at my side when I open my computer to play music trough Amarra Symphony software.
This little Dac-Amp never deceive me and the first time I try it it wasn't a placebo effect that make me step off of my chair and yeal: ******* SOUND GOOD!

As a matter of fact, it was the beginning of a confuse quest about the meaning of a DAC. Before that I wasn't sure it can change drastically the sound, but this was because I wasn't listening the music but just feeling it, wich should be the way to listen to music, but when you develop curiosity for all the frequencies range and their interaction in an acoustical imagery you became as this passionate biologist that want the best microscope to be able to see ALL the details of living cells. You want more, always more beauty, for every type of music you listen.

The Fiio E7 is an entry level DAC, it will wow you if you do not have better gear alreay. I can assure it is better than my Macbook soundcard but in no way better than the sound of the Ibasso Dx90, Dx50 or even Hifiman 601. With any computer Dac you should use an appropriate software that will use all the potential of it, plain itunes is not the best. Even VLC is better than this but can make static with flac files.

Sound is warm and relaxed, treble is a little roll off and mids are fowards. The low end is spot on and have a 4 levels boost. Must of time I put it at level 1 bassboost and it give my Grado a more rounded and beefy sound, wich sound excellent and give more excitment to lot of tracks.
This is not an analytical or cold DAC, and it's forgiving for lower quality audio format (still I do not advice to use less than 260kb). It sound musical and give more power to headphones, max impedance I will suggest is 150 Ohm, and for full result it's better to keep it under 100 Ohm.

I highly recommend the FIIO E7 (E07K now).
Pros: 80 Hour battery,Portable,Bass sound good at times,Fits in pocket/laptop bag.
Cons: usb receiver limiting the bit rate minor con, bass some times not clean.Have a habbit of dying.
The E7 uses a wolfson Wm8740 for its Digital-To-Analog convertor (dac), The Amp section uses the AD8692 and TPA6130A as Pre- and power amps. The dac does supports higher bit rates, but it due to the usb receiver chip only supports up to16 bit/48kHz. The device gets its power from the usb port or the dock port if it is docked into the E9. The charge last 80 hours when you’re not using it with any power sources.

The Amp section headphone Impedance Range is 16ohm-300, the output power is 150mW @ 16ohms and 16mW at 300@, the E7 amp section works very well with my DT770 pro-80s.
The Fiio E7 is one of the older line ups that been replaced by the newer models. It has Two Headphone jack’s which is useful if you’re sharing music with a second person, or using Two Headphones side by side. With a reset hole in the middle of the two which you can use to reset the device.
On the bottom of the device theirs an usb input, which it uses the PCM2706 for the usb receiver. Next to it is the dock connection, with that dock connection the E7 can be connected to the Fiio E9 and use with it as an all in one Dac solution, adapters exist with different functions for that plug. The Aux input is used to plug any other source into the E7, to use the E7 as a standalone amp.
One the side of the E7 are the Volume buttons which are hybrid bottoms which raise or lower the volume, or flip thru the menus. The menu button which on a single press takes you to the settings and select options within the menu. The Power button which turns off the E7 or exit the current setting option in the menu. On the front the E7 has an Oled screen.
There are 3 different bass settings with in the EQ setting which changes the sound of the Fiio E7, Eq0 which is the default, EQ1-3 which changes the bass and the rest of the sound. 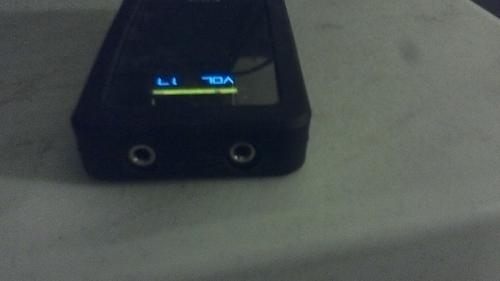 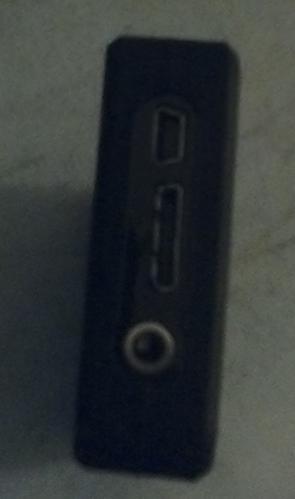 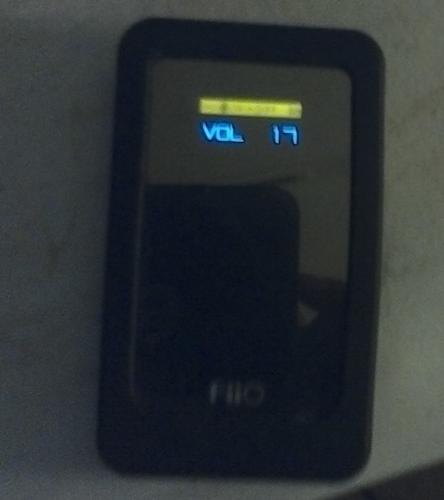 The Songs
Chris Bekker – Heimat B (Original mix)
The first thing you hear when you listen to the song is the bass, it hits hard with impact. While the snares are clean and heard. But the drums are a tad hard to hear. The rest of the song sounds nice, with that highs being a tad detailed, it does bother my left ear but not that much. Since that’s where I have HF Tinnitus.
The sound stage I would say is close to you, the sound image is ok to me. But over all sounds good.

CloZee – Koto
In this song the first part is really clear including the snares. The bass in this song also have an impactful sound. The vocals sound good as so the clapping in the part where the bass drops. When the bass starts back up it takes the fore front making you notice it.

Noisy Blue – Eyes on You
The Song is mainly piano, which in the song sounds really good it has weight behind each note that is played and how heard it being strike. It’s a little bit not clean, But Violins are heard in the background. The sound imaging is ok to me but not perfect. The sound stage is close to my head with this song as well.

Slakker – Sailor and the Box
Similar to the type of song as Noisy blue, instead of pianos. It’s Drums, bass, vocals and an electronica note. The bass and the drums hit hard, the snare like the other songs are clearly heard. The vocals are center, some of the voices pans from left to the right ear. Like noisy blue the music is close to your head.


Over all while with a lot of these songs it did really good job, the bass at times wasn’t clear. But I enjoy using my DT770 pro-80 with it as my primary setup for them. Due to the bass and the portability for my laptop/tablet.


Updated: The Fiio E7 I had, decided to die on me, no longer charging or any thing.Such a shame but then I just found out that it common for this model, What makes matter worst that you gotta go thru a work around just to change the battery. I don't know what Fiio was thinking  putting the battery directly to the PCB , instead of using a 2pin plug. Since I bought it used can't do a thing about it, but switch to something else for my portable needs.
Pros: Great amp/dac combo, Easy/no installation, Robust, Excellent price/quality
Cons: Thickness makes it a bit unappealing for portable use
Oh the wonders this little box can do!
The compact yet powerful Fiio E7 is everything you could ask from a 99$ DAC/amp.
After installing the drivers, you're good to go. It gives your music a great dynamic range.
Using it on my Ultrasone Pro 900, with the different bass setting, a "+2" on the bass EQ truly makes the Ultrasone nature stand out.
This little thing can drive deep, impactful bass with ease. I rarely, if ever, go past 25.
It's a great improvement from my on-board audio card. I don't find myself using it with my Ipod, the thickness of it makes it a bit unappealing, Perhaps I need bigger pockets!
This little box made a great improvement, and I recommend it to anyone that want a small, inexpensive amp/DAC combo!
Read more…