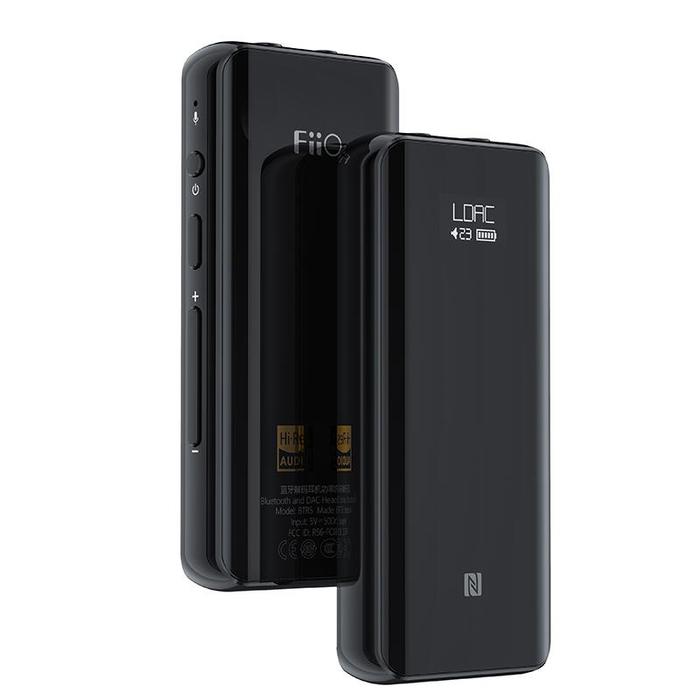 Pros: Good sound quality. Separate voice call and sound level features. Adjustable "sound" via digital filters and distortion controls. Car mode. Charging on/off options. USB-C.
Cons: A higher-power single-ended output instead of the unnecessary balanced output would make more sense at this price point.
FiiO sent me this unit for review. I wasn't expecting much from the BTR5 given its size and price, but it surprised me at how good it sounds, both wired and wireless. At least via the balanced output it has quite a bit of power, way more than enough for IEMs (which were driven fine from the 3.5mm port) and enough even for common, easy-to-drive headphones, as long as you don't intend to blast your ears out (which I never recommend).

The main benefit to the BTR5 over other Bluetooth devices is the smart phone control via the FiiO player app. Among the many features, you can control whether it charges from USB, useful if connecting to a phone that you don't want to drain power from. You can also control the digital filters and control the 2nd or 3rd order harmonic distortion to make the sound slightly "warmer" or "brighter". It also has a "Car Mode" where it will switch on and off when it receives power from the USB input.

Sound-wise, while it isn't going to be as refined-sounding or as detailed as the big DAPs, like the M11, it did best the M5 in my listening, with something of a "lively", but not harsh sound that worked well with even Campfire's Andromedas. This can be tamed very slightly via the digital filter and distortion controls in the app. With less expensive IEMs, the differences between the BTR5 and the bigger DAPs was reduced, making it a great value option for owners of the FH5, FH7, or sub-$200 IEMs, as it controlled the bass of dynamic driver IEMs very competently.

The 2 Ohm output impedance lowers the level of hiss with very sensitive IEMs, but didn't affect the tone of the Andromedas, unlike my 10 Ohm iPhone 6, which causes them to lose bass.

The BTR5 has a full range of Bluetooth codec support. Handily, codecs can be disabled in the FiiO app, so if, say, LDAC isn't being reliable for you with a particular device, you can disable it. APTxLL (Low Latency) is also supported, so if watching a movie or playing a game, it reduces the annoying lag.

My only real gripe was with the balanced output. I think it would have been better at this price point to have a high-powered SE output, and forgo the balanced output altogether. Money saved on the BTR5 is lost when one has to buy an aftermarket cable to use it to its full potential.

From a full rating of 5 stars:
Minus 1 star for the necessity of having to spend money to re-cable your IEMs/HPs to balanced to get the most out of the device, which I think is a negative at this price point.
Minus half a star for some minor issues with the iPhone FiiO app.
Plus 1 star for the extra features such as car mode, APTxLL, and charge control.
Last edited: Feb 7, 2020
Reactions: Fishdo, Faber65, iAmRoyDom and 4 others
View previous replies…

Rdwng1975
I still struggle to see the value in a device like this. Is this the my phone does not have a headphone jack workaround? I know it can do multiple things it just seems like a dap deals with everything.

Currawong
@revand Of course, if a product is optimised around the balanced output, then that will perform better. My point was, they could have made a just as good (as powerful, and with just as good sonic quality) single-ended output, and for people who are on a budget, saved them the need to buy a balanced cable to get the most out of the device.

People have been sold on the "balanced is better" hype, and manufactures have to cater to that belief. That has not been to our benefit.
Read more…