Loading…
My New Reference Transport
Pros: Superb sound which surpasses many more expensive alternatives, simple/silent design, low-key good looks, excellent UI in Stylus mode, price is relatively affordable in this space, can be upgraded with linear power supply (see cons)
Cons: Needs PSU upgrade to sound its best - a pro or a con depending on your approach but personally I like the modular nature and ability to upgrade, only USB output so you'll need a DDC to get AES/coax/optical, no display or built-in DAC features (again, these might be pros for some people) 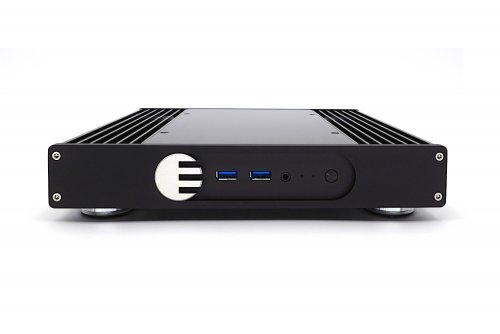 I've been using the Euphony PTS music server for a few years now. It's a simple, compact, silent source which does everything I could ask from a device like this. To get the most out of it, I pair it with a Keces Audio P8 linear power supply, and the resulting performance holds its own with far more costly devices I've owned or auditioned.

The secret sauce to the PTS is the Euphony OS, which is a dedicated audiophile platform based on Linux. I won't go into the technical bits here, but I'm convinced of its efficacy based on what I hear. They also sell the OS separately which can be installed to the hardware of your choice, and my experiments have shown it even brings a benefit to the most basic general-purpose PC. Particularly when combined with a quality PSU such as the Keces P8. All this time I've been building my own music-server/streamer devices with special USB outputs, SATA filters, and other audiophile-oriented parts, yet I've been missing out on significant performance gains by running Windows or my favorite Linux builds rather than a purpose built OS like Euphony. 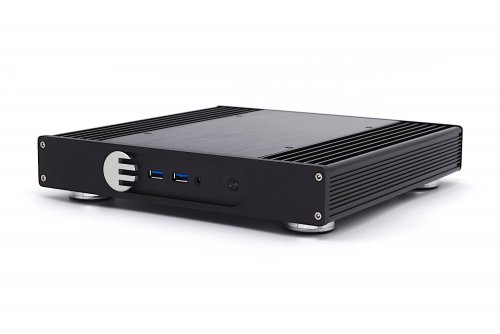 As good as it is, the PTS was technically not an "official" Euphony product - the North American distributor had it specially made, and it worked quite well, but the Euphony team was not really involved in its creation. But now the group has decided to launch their own purpose-built hardware device, customized to work in conjunction with their operating system. They call it Euphony Summus and it starts at $2599 for the standard configuration with a 1TB SSD (more storage available for an upcharge). They do still sell the OS for DIY folks, but the version included with Summus has some further optimization which you won't get using your own hardware.

Summus includes a powerful i7 CPU with a generous amount of RAM, plus anywhere from 1TB to 8TB of onboard Solid State storage. The system lives in a fanless passively cooled case which is completely silent. Stock power is the standard switch-mode brick but aftermarket supplies from 12v-19v are supported. Note the stock supply is 19V/5A so any replacement will need to be fairly stout - my Keces P8 is 12V/8A so more than capable of doing the job.

The Euphony team has incorporated various tweaks specific to this hardware platform. Highlights involve severely throttling down the powerful CPU during playback to control noise, and evenly distributing playback tasks across all cores for even lower utilization. Then there's the "Ramroot" feature which has the system kernel boot entirely into RAM to avoid all disk interactions. These, plus various other behind the scenes optimizations, add up to an ideal platform for audio playback. 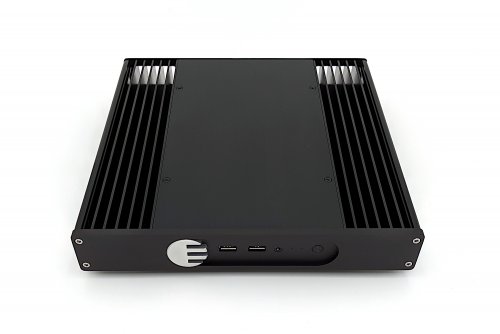 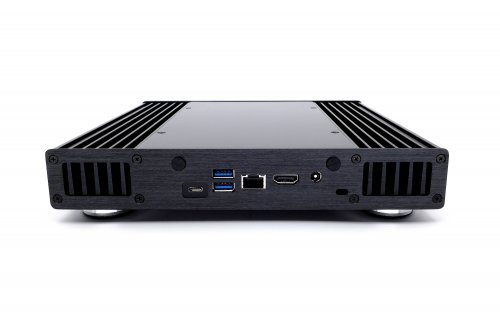 From a usage perspective, Summus is totally straight forward. Simply plug in power, Ethernet, and connect USB output to your DAC of choice, boot the system up, and (after giving it a moment to complete startup) point any browser to this location: https://euphony-audio.com/launch-euphony/. Clicking the button on that page will show any Euphony-based devices on your network, and choosing one will launch their Stylus interface. From there, we can play files directly or switch to one of several different modes - Roon Core, Roon Bridge, HQPlayer Embedded, Squeezelite, and various combinations of those options. 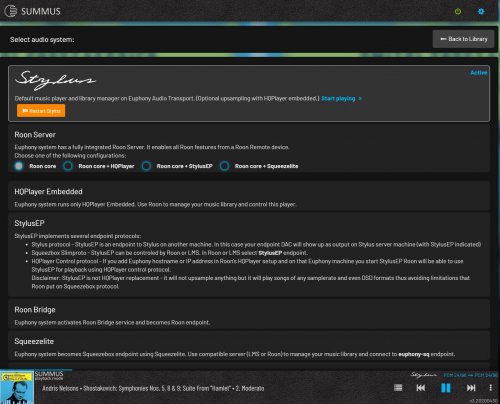 Switching to a Roon mode lets the system show up in Roon as any other Roon-ready device would. That can be combined with HQPlayer if that's something you might use. There's also an AirPlay mode which I've never tried. The standard Stylus mode is a full-fledged playback interface which rivals Roon in effectiveness if not quite overall polish - as a long-time Roon fan, Stylus is one of the few systems I don't mind using, but Roon just hits the spot for me. Still, Stylus is definitely attractive, intuitive, and full featured. It can manage the local library or connect to network storage (an Asustor NAS in my case) along with Tidal, Qobuz, and an option for internet radio (which I haven't messed with but intend to at some point). It all works quite seamlessly and I'd rank it just a few steps behind Roon overall, but definitely above JRiver, Foobar, and the other common choices as far as I'm concerned. This is of course a highly personal thing, so I'd never argue with someone for having a different preference than mine. 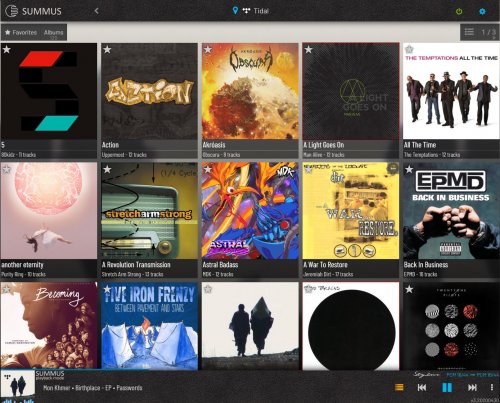 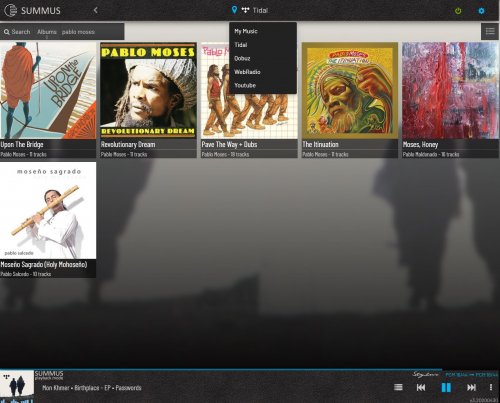 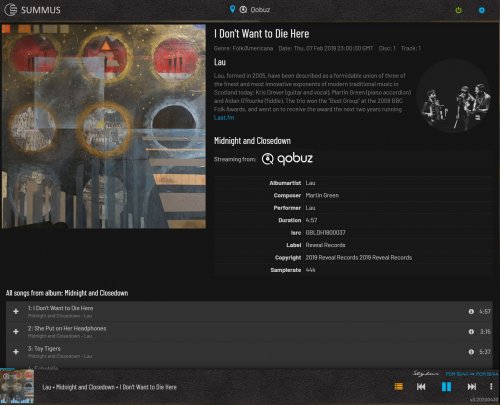 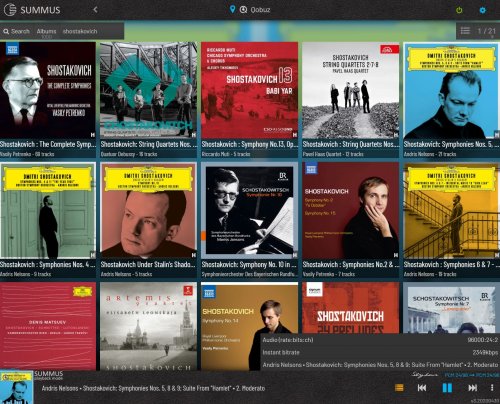 While I tend to use Stylus mode on a regular basis, I also appreciate having Stylus EndPoint available. That's a mode which sort of "tricks" Roon into "seeing" the Summus as an HQPlayer network endpoint, allowing it to work with the device in Ramroot mode. Just running Roon core or bridge mode alone does not enable Ramroot and thus, while sounding excellent in its own right (particularly with DSD upsampling in play) is not getting every last bit of SQ out of the system. I like to keep Roon running on a big server anyway, using my old (and water-cooled/massively overclocked) i7-5960X 8-core/16-thread CPU. So the StylusEP mode taps into that and generally sounds best when I want to use Roon. There is also an option for running Roon Core plus StylusEP from the Summus itself, removing the need for an external server. 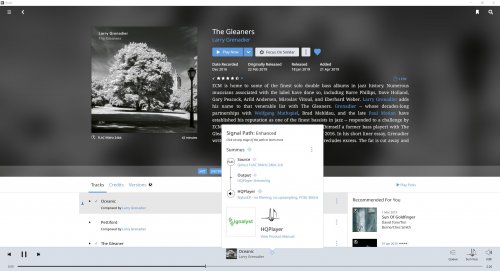 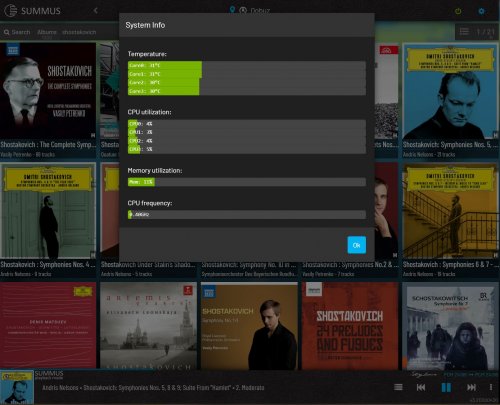 In terms of SQ, I'm still exploring and contrasting Summus to the PTS. But so far I really like what I hear. There's an improved sense of immediacy, a more fleshed out soundstage with superior layering, and an inky black background which is even better than the already excellent PTS. In my experience, this level of performance easily takes us beyond 95% of the competition out there. I'm talking about the $5k-15k music servers of the world, but also crazy-expensive disc transports which cost as much as a Honda Civic. I've had more than my fair share of that sort of thing in my rig and I'd take the Summus over any of them.

One interesting thing I've noticed so far - if I remove the Keces P8 linear power supply and just stick with the stock PSU, Summus performs roughly on par with the PTS/P8 combo. Which, if I recall correctly, was priced within a few hundred dollars of the Summus. The newer device sounds very slightly better in a few areas but it's not far off. The difference then involves significantly higher system horsepower for those running Roon Core mode with upsampling, convolution, multiple zones, etc. Adding the upgraded PSU takes us up into the stratosphere.

Interestingly, I do have a single DAC (BMC UltraDAC) on hand which pairs better with the original PTS device. It just gives more solidity and despite a less expansive soundstage, I still find the PTS/BMC combo more convincing. But system synergy is a real thing and I never expect any single DAC/amplifier/headphone/transport/etc to be the best in every single case. Aside from that one instance though, Summus is the clear winner with every other combo I've tried - and I've tried a bunch.

I also enjoy using it with a quality DDC such as the Matrix X-SPDIF II. Power that by the same Keces P8 and the combo is superb for feeding my older/non-USB capable DACs - in my case from Sonic Frontiers and Theta, but I can think of many others from Levinson, North Star Designs, Audio Research, etc which pre-date USB. Not to mention the various modern DACs I've experienced which just don't sound as good via USB, regardless of using the latest technology. I then add my Titans Audio Lab Helen to the mix to de-jitter/clean up the signal even more, and the result is a world-class (if somewhat overly complex) chain that will challenge all comers regardless of price. The Helen doesn't do USB so I only use it with AES paired with the Matrix DDC - it does add a small amount of SQ which in some cases is worthwhile, but in other cases ends up not being very noticeable. 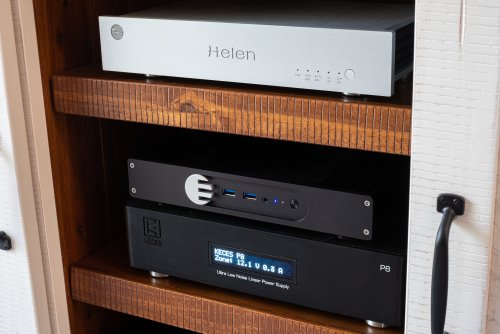 I'm not just using hyperbole here - over the past few months I've directly compared the Euphony Summus with the Keces P8 to some heavy hitters and it's always come out on top. These contenders mostly sell for significantly higher prices... at least double what Summus costs, but in some cases quite a bit more than double. I'm talking Totaldac d1-player, Aurender N10, Wadia M330, Lumin X1, and some of the higher recent models from Linn and Naim. All of them had enjoyable aspects (except maybe the Wadia... I didn't care for that one) and I'd particularly like to revisit the Lumin as an integrated streamer/DAC when I have the time. But in terms of transport usage, none of them impressed me as much as the Euphony Summus with P8 power supply, with or without the Matrix/Titans gear in the chain. The closest some of them came (such as the Totaldac) was matching the performance of my complex little chain, which is fine until we consider pricing where Summus comes out far ahead.


The Euphony Summus - while certainly not cheap - reminds me once again that it is rarely the most pricy gear that performs best. Sometimes a clever designer will extract more sonic goodness, for a lower price, and do so without much fanfare. The Summus is just this sort of device. If you are seeking top-caliber playback in a music server/streamer/whatever you might call it, Summus is definitely worth a look.
Last edited: Aug 22, 2020
Reactions: elvergun, HK_sends, Cat Music and 6 others
View previous replies…
L
LeMoviedave
That is some good Shostakovich you have on display!

jracine
Hi - Is this server still the cat's meow?
I have an Aqua Formula + Aqua Link setup with a MacMini with full Uptone kit. Result is nothing short of amazing.
Would replacing the MacMini with a Summus yield benefits?

project86
Well I still absolutely love it, I can tell you that. I've used it both as an endpoint type device being fed by my custom built server, as well as using the Summus itself as the Roon server feeding a Nativ Vita, and in both cases it performs fabulously. I'd say there are gains to be had in your rig over the Mac hardware despite your upgrades, but hard to be certain without a comparison. You can contact Arthur Power about it as he has mentioned the ability to spec an even higher power unit for extreme Roon users - that may be worth considering.