Pros: Volume, piano finish, LCD controller, satellites, warranty, overall quality
Cons: bass could be deeper
One would expect that a system with such a massive sub would overpower the rest of the system but it doesn't, in fact it actually leaves the listener wanting deeper bass but i'll get to that later. The rest of the system is phenomenal though as the highs are crisp and bright and the controller offers you all the control you could possibly want including even a multi-level brightness setting for the LCD display. The controller also separates the bass from the sub setting so that if you want you can add extra bass just to the satellites. My only two (minor) gripes pertain to the bass, as I said, I was hoping it would be a little deeper and you can't completely turn it off so the sub is always producing at least a little bass which other 2.1 systems allow so you can completely eliminate the sub. To clarify my gripe about the bass, I have the Logitech Z623, the Klipsch Promedia as well as the Logitech Z-2300 and the Edifier's bass is no deeper than any of the others (yup, i'm a basshead) in spite of the massive weight and size difference of the Edifier sub compared to the others. Having said that, this system will crush 99% of other 2.1 systems for bass depth, it just doesn't improve upon other units that have existed for years with much smaller subs. It also has a 2 year warranty which is twice the length of many of Edifier's competitors, like Klipsch. Overall though, an excellent system that can turn almost any size room into a veritable nightclub with it's volume.
Pros: Excellent fit and finish, Bass response, Very nice satellites
Cons: Sub is pretty big if you don't have the space
I was in the market for a higher end 2.1 system when my search ended up at the Edifier website, I was impressed with the specs and decided to delve further, found a set at a nice price and pulled the trigger, my previous speakers were the Logitech Z-680 which I enjoyed but the Edifier is definitely next level as it should be given the price difference.

I mainly use my PC for music listening and online gaming, the S730 definitely shines for both, it offers clean crisp highs and thunderous bass response, the piano black satellites are a pleasure to look at and the system is great for movie viewing, for a 2.1 multimedia system you will be hard pressed to find a better set up.

The sub delivers copious amounts of bass, I'm a basshead but I keep the SW level at +2 and it still shakes the room, I can drive this system hard with no distortion, the satellites are a tad light on the midrange but I don't have a problem with that, all in all a great sounding system, you will definitely spend more time in front of your PC. 8^)
Pros: Amazingly accurate and powerful bass response for this price range. Very functional and stylish, well built.
Cons: Average performing satellites
I bought this on sale for $250 to upgrade from my 8 year old Logitech Z-2300’s, which served me very well. I see these going for nearly double that at many retailers. I actually purchased the Audioengine A5+ (for $350) first, but ended up returning them because I began hearing a rattle in the passive speaker. I decided to give these Edifier’s a try before trying another A5 set. I was satisfied with the A5’s, and planned on adding a woofer latter on. But after hearing the Edifiers, there was no going back. I will compare them and explain why. I have always preferred 2.1 systems for their space saving, easy wiring, and value. A similarly priced 5.1 or 7.1 system would be less powerful. And since I normally play music or movies/videos (in stereo) on my PC, I really have no need for a surround experience. When I do play games, I use headphones (Sennheiser HD558). 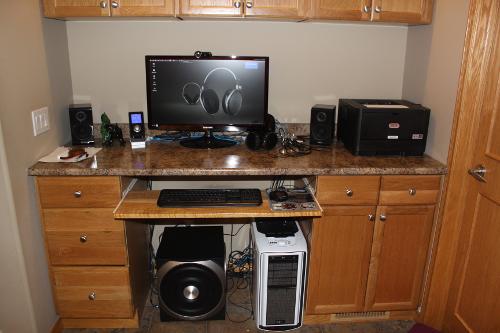 My setup is a Creative X-FI Fatality Titanium Pro sound card. I have it currently connected using the Digital Optical connection. I found that when using the provided RCA to 3.5mm analogue cable I could hear a faint hissing that would get louder with volume. This persisted on my onboard and sound card, and would go away if I removed the cable. When using my own Optical cable, the hissing went away, it could have just been the cable, but I had no spare to swap with. However, in theory, my higher end sound card should do a better job of converting digital to analogue since it’s got a higher end DAC. Ideally if you have aftermarket sound going analogue should be better. The speakers did sound great with onboard sound also, just not quite as powerful at higher volume. If you can’t afford the speakers and a good sound card, rest assured they do sound fine with onboard. I primarily tested them playing flacc, mp3, and ogg music files from my personal collection using Winamp with EQ options off. Anyway, on with the review!

I will not delve too much into the spec’s here; you can find them on Edifier’s website if you haven’t already. But I would like to point out the satellites are 2-way, and the woofer uses 2 passive radiators on either side, quite different from other woofers in this price range. Most agree radiators produce better bass overall, but some are just so used to the punchy bass of traditional woofers, and still prefer those. They are well-made speakers; I was surprised at how heavy even the satellites were when compared with the more expensive and larger Audioengine A5+. Esthetically, I think they look a lot better, and the satellites take up less desk space.

The wired remote allows for changing all your normal functions like input (CD, PC, and Digital), bass, treble, balance, LED backlight, and woofer volume. It shows a numerical representation of the volume (0-50), a feature the A5 was missing. The A5 has no indicator of how high the volume is, the knob just turns indefinitely. The wireless remote has all the same functions including mute. When compared to the A5’s, the Edifiers have a lot more configuration options, the A5’s remote only had volume, mute, and power. The wired remote also has a convenient 3.5mm output on the side for headphones, another feature missing on the A5.

Overall, when it comes to features and style, the Edifiers deliver well on both fronts, providing you with all the functions you would need, while adding a stylish touch to anyone’s desk (10/10). They look and feel high end, especially the woofer, what I consider the crown and jewel that holds it all together. But be warned, although the satellites are quite compact, the woofer is massive; confirm you have room beside or under your desk.

Being 2-way satellites, they do a good job of filling my large room. They are in the dining room which is open to the kitchen and living room, a little over 900 sq ft. When sitting directly in front of them, the sound is directed really well towards the center, creating a great stage presentation one would expect from a 2-way satellite. The A5’s were fantastic in this regard also, but quite a bit more powerful.

Overall the satellites produce a neutral sound signature when leaving treble and bass at 0 (normal). The highs are good, and mids are up front and in your face. However, the A5’s sounded a little crisper, with mids and highs that cut through with more power at higher volumes. In terms of volume, compared to the A5’s, there both 75Watt RMS. But the mids on the A5 come through to a greater extent, and get louder, while staying more crisp at higher volume. In terms of volume, the Edifier satellites are just average in my opinion, and when pushed, they simply cannot match the Audioengine's. But keep in mind the A5's are more expensive and have no woofer.

The bass is definitely the biggest improvement I saw when compared to the Z-2300 and A5 sets. The woofer is really what holds the whole thing together in this set. In contrast to traditional woofers, which produce punchy thumping sound, these produce a smoother, faster, and much tighter bass. This becomes especially noticeable on tracks with quick variable bass frequencies, and it only gets sweeter the louder you go. Instead of hearing the thumping punch, you feel the vibration to a much greater extent, and once I got used to this, it became much more satisfying to listen to, especially for extended periods. If I was to disconnect the satellites, I still hear the music. The bass is musical in its presentation, more true to the music and much more extended than traditional woofers. This is really what pulls the Edifiers miles ahead of the A5’s, and makes them a significant upgrade from the Z-2300’s.

I actually prefer this woofer to my Velodyne DLS-3500R that I use in my media room, purchased for $400. At $250, I would gladly pay for the Edifier woofer alone, and if my budget permitted, I would add the Audioengine A4 passive speakers ($250) and power them right from the woofer, for the best of both worlds. Because of the average performance on the satellites, I give it 7/10 for sound.

You might think it would be unfair to compare a 2.1 to a 2.0 set, but in this case, there similarly priced (actually Edifier was $100 less at my time of purchase). And many claim the A5’s bass is sufficient to run them without a woofer, and before hearing the Edifiers, I would probably have agreed. I do not consider myself a bass head by any means. But after hearing the Edifier woofer, there was no going back to the A5.

Although I prefer the sound of the A5 satellites to the Edifiers, it’s not enough to make up for the bass performance of the woofer. The wired remote and better functionality sealed the deal for me. For those who can afford it, I would recommend buying these (at under $300) and the Audioengine A4 passive speakers ($250) for the best of both worlds. Or if you already have a decent woofer, the A5+ or A4 would be a great addition. If you need it all, or are considering the A4/5’s without a woofer, you would be better off with the Edifier set, especially for those who like their bass. Just double check you have the room for this beast of a woofer. I would have given this 10/10 if it weren’t for the average performance of the satellites.

dreadinny
Hi. I am looking to purchase this set. I am amazed that you found it for $250, where?

Croozer
Just found a new set for $286, gonna give them a try, thanx for the review.

baglunch
Does anyone know of a way to turn off the light on the wired remote while in use?  I can only find how to turn the light down to its lowest setting... and off/standby.  I'm considering just cutting a bit of cardboard to cover the screen, hinged with a piece of tape.
Read more…