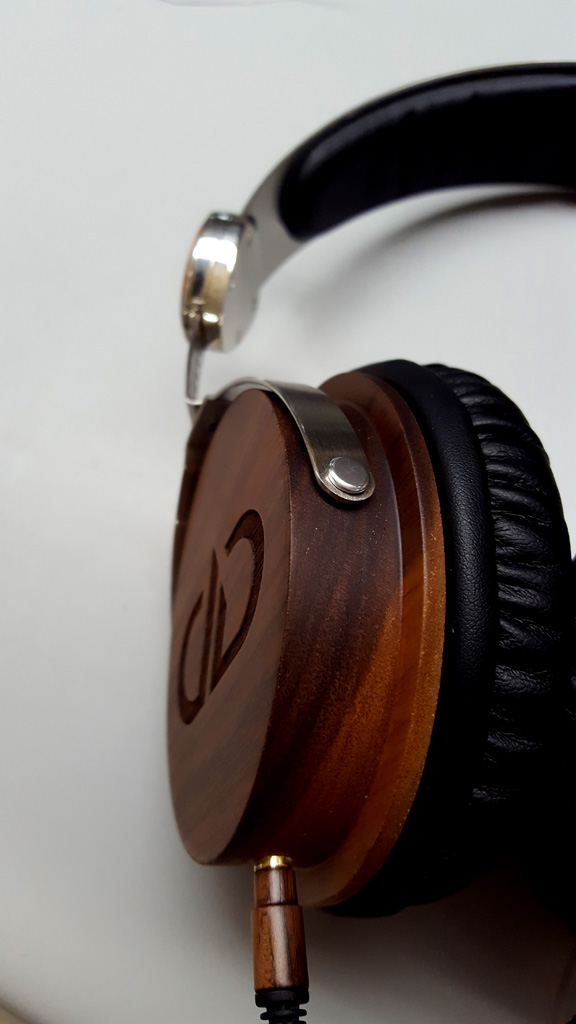 -::I originally published this review on THL. Now I wish to share it with my Head-Fi fellows.::-

::Disclaimer::
DD Audio provided the DXB-04 free of charge for the purpose of my honest review, for good or ill.

At the time of this writing, the DXB-04 sells for $99.00, though it has seen much higher prices in the past.
www.DDAudio.com

I had never heard of DD Audio, since they exist primarily in the realm of car audio, and I am all about headphones and IEMs. But when I saw Head-Fi member Hawaiibadboy post a photo of these simple yet gorgeous cans, I had to know more.

Contacting DD Audio, I explained how Pinky is ravenous for wood and must try these ****ers out! Kevin Doyle of Sales, Service, and Support must have sensed my dangerous need, and shipped them right away. A mere two days later, I had them. 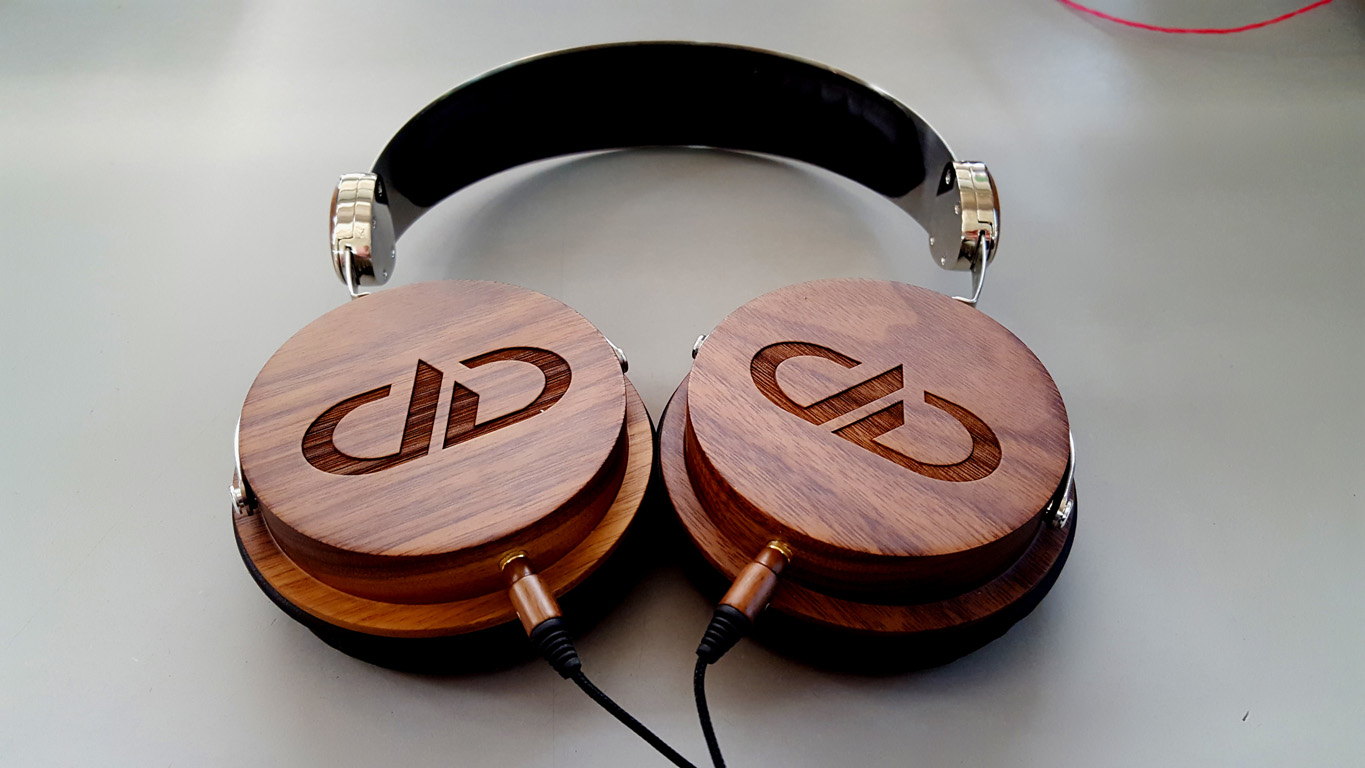 ​
The DXB-04 does not feel quality in-hand. It’s sort of flimsy and rattle-y, and the pads are very low-grade I-don’t-know-what. Yet upon closer inspection, instead of plastic you see only stainless steel and hand-oiled Black Walnut wood, screws instead of glue. They may “feel” flimsy, but I’d wager they’ll last for ages. Maybe not the ear pads, but… who knows.

In person, the DXB-04 looks even more beautiful than in the photo I saw. They really are a handsome set of cans. And quite comfortable. The ear cups are on the small side, and may rest on part of your ear, instead of completely encompassing them. Nonetheless, I felt no discomfort or pain, even after hours of steady use. Whatever they’re made of, the pads are soft enough not to intrude on your enjoyment of the music.

The cable is standard OFC, which incorporates a mic for phone calls, and uses 2.5mm mono plugs for L & R channels. DD Audio went the extra mile for aesthetics, however, adding what looks like more Black Walnut for the plug housings. Very nice! Pinky approves! 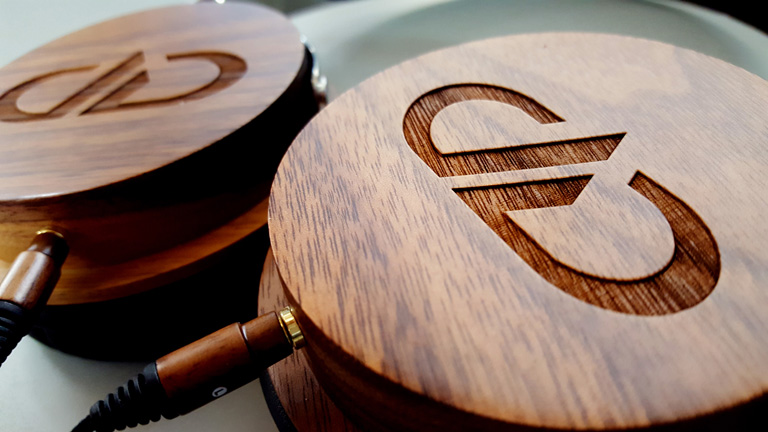 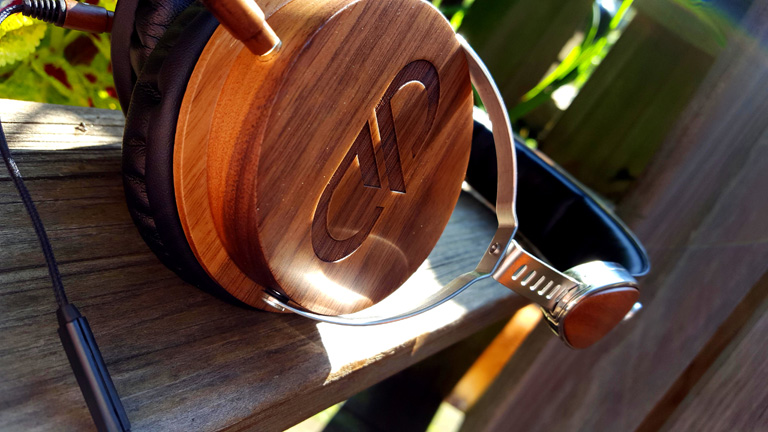 DD Audio’s DXB-04 is a creature of neutral-warm tonality, where clarity and smoothness sing together in harmony. These headphones have a very clean presentation, with an abundance of air imbuing expertly balanced tuning.

High frequencies are well-extended, leading an arc into great light and sparkle. It has smooth treble, which does not exhibit harsh peaks, yet is capable of sharpness when called for, thanks to its impressive linear extension. The DXB-04 is fun and lively up top, though it sounds surprisingly mature. I hear a measure of refinement unexpected at the price-point.

DXB-04’s vocals possess a hint of warmth, but are mostly uncolored. They sit quite neutral on the stage, though are rather large in scale. They have GREAT transparency. Articulation is high, and textures are well-detailed. Male vocals receive some bass-bleed, adding more warmth and color, while females come off ever so slightly dry in comparison. Neither the color nor the dryness goes so far as to make them sound anything but superb. Still, there is a change while moving up the mid-range.

Like with the treble, the bass is of a quality to satisfy those of us who lust for that particular frequency range. Its 50mm dynamic driver extends VERY low and has a most mouthwatering timbre. The DXB-04’s low-end is full and rich, and sits fatter than purely neutral. However, it’s balanced with the rest of the mix and does not cloud the mids. The bass has moderate speed and texture, not sounding too slow or muddy. It’s very rounded and natural in tone.

Soundstage is remarkably cubical, with equal width, height, and depth. It is large and spacious. Imaging is excellent, as is separation. Resolution is OKAY. Better than I’d except from this price, but not mind-blowing. Layering is above par, but not by too much. To boil it all down, this headphone performs well beyond its asking price. 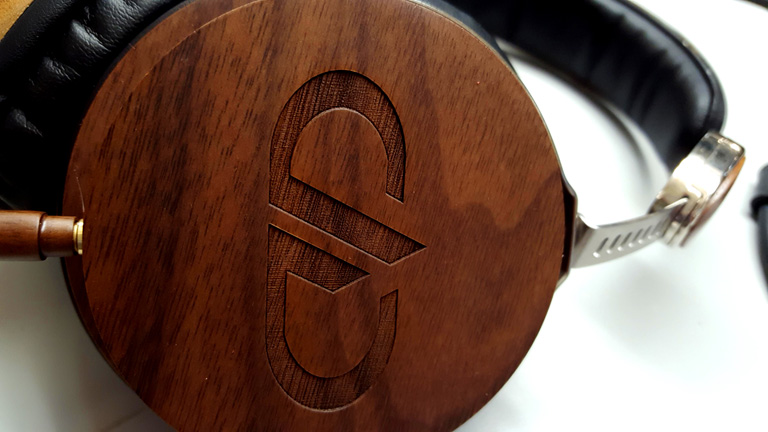 The Klipsch Reference Over-Ear ($249) has a more closed-in sound. Not as large and expansive. It’s warmer and smoother than the DD Audio. This warmth is achieved not through extra bass, but tamer highs. It’s not as airy or extended up top. Resolution is about the same, though transparency easily goes to the DXB-04. The Klipsch is ever so slightly more comfortable, and quite a bit more solid and luxurious-feeling… in spite of its plastic.

For an obvious upgrade over the DXB-04, the Meze 99 Classics ($309) has you covered. It’s just as rich, full, and airy as DD Audio’s headphone, but even clearer, and noticeably bigger in soundstage. The lows may be a little more bloated, and don’t produce sub-bass as well, yet they do so much right it’s impossible not to love them. Vocals are more vivid and detailed, and reach a greater level of transparency. There is just an extra degree of refinement to the sound I can’t ignore. Like DD Audio, Meze deals in metal and wood, but they do it better, crafting a headphone that feels genuinely up-scale.

I forgot how much I love the Sennheiser Momentum 2.0 Over-Ear (Discontinued). These were my first mobile cans, and they are truly enjoyable. But they haven’t aged well. Meze defeats it handily, and even DD Audio’s DXB-04 has a more transparent, detailed sound. The M2’s treble is far too rolled off, lacking the air, sparkle and clarity of the DXB-04. The bass is wooly, and does not extend very far into the lower registers. Vocals are sort of veiled. Still, Sennheiser takes the win in soundstage, as well as build quality and comfort. 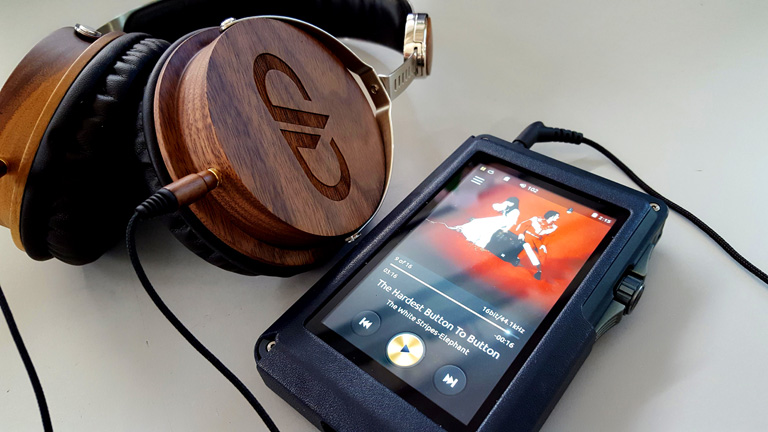 If you desire the absolute best from the DD Audio DXB-04 in a portable solution, my reference player is the Opus#2 by theBit. Opus fills out these headphones with a powerful, clear sound, and comes off utterly natural. It pushes the resolution as far as possible, and really showcases the DXB-04’s knack for transparency. The bass hits hard and realistic, the treble extends forever, and the vocals are quite simply perfect. 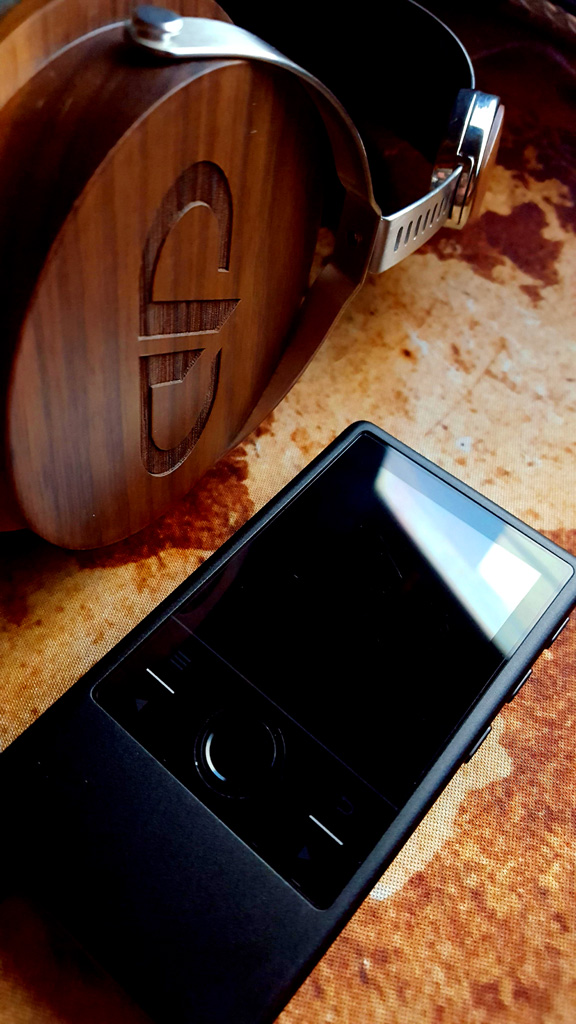 For a lusher, warmer sound, and one that won’t break the bank, the Cayin N3 is a decent choice. Cayin’s house sound is about serious bass-slam and a more intimate stage. But this little player does quite well with its sense of depth. Clarity is quite good, as is dynamics. The DXB-04 takes on a very rich, chocolaty tone with this player. It’s delightful. 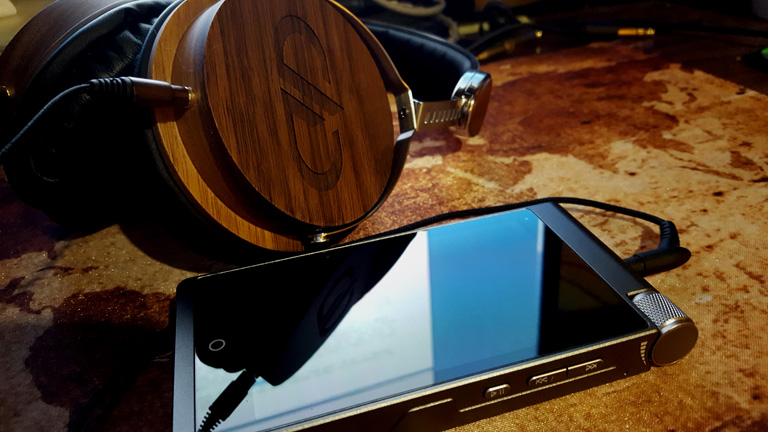 Cayin’s i5 takes all those things I wrote about the N3 and raises the quality and refinement by a few steps. That rich, chocolaty tone is now on a level of pure decadence. The bass has more power, but is also more controlled and detailed. i5 takes better advantage of the DXB-04’s soundstage and skill with transparency.

To push DD Audio’s virtue of neutrality and clarity to its fullest, without spending a terror-sum, the Opus#1 is possibly the best you can find for under $600, and it’s nearly half that right now. It’s a little thinner-sounding than the Opus#2, while packing so much dynamism you never feel it’s missing anything. Opus#1 takes the DXB-04 to supreme heights of transparency and crystalline mids. But it doesn’t lack bass. Oh no, it punches hard, but in a neutral way. 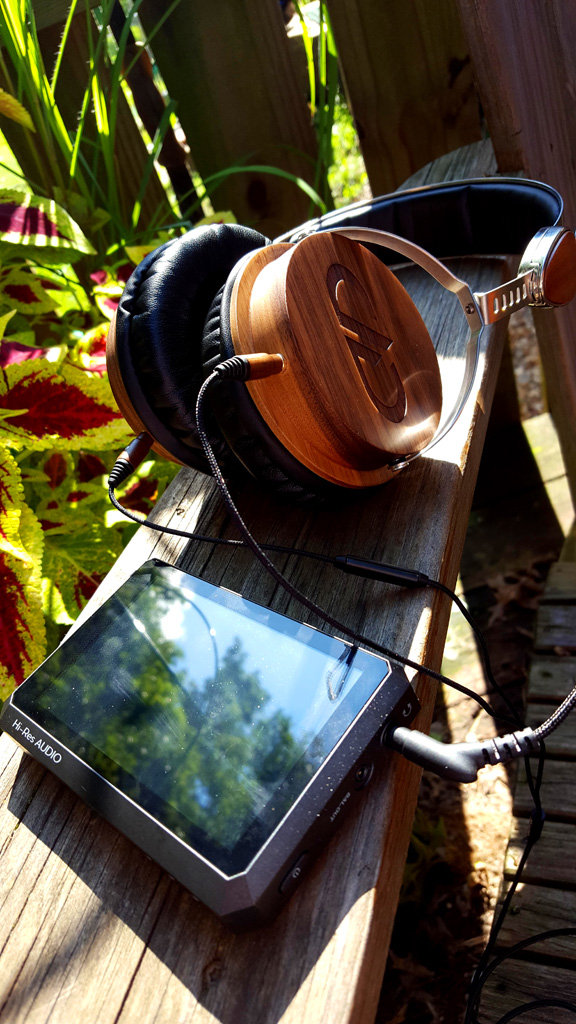 When I first looked up the DXB-04 on DD Audio’s website, it was selling for $249, and I thought it was worthy of that price. In terms of sound quality it’s as good if not better than most of the competition in that bracket. The only headphones that would make me hesitate to recommend it was the offerings from Meze: the 99C and Neo.

Less than two months later, you can buy the DD Audio DXB-04 at $99. They are now well below the Meze range. I don’t know what to tell you. Buy it. Buy it now! If you’re in the market for anything even remotely like the DXB-04, it’s a goddamn steal at this price. 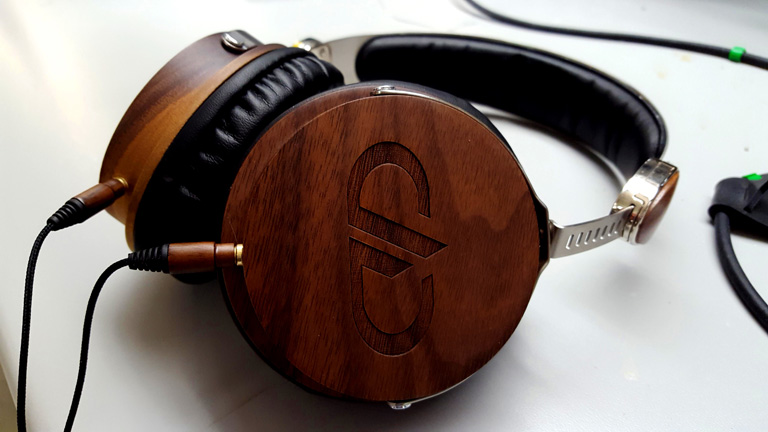