Craft Ears was always to push the boundaries further to get the best sound possible. We wanted to create something new and fresh. Craft Ears Aurum is our first tribrid IEM released. We believe that three types of drivers are everything we need to create perfectly shaped sound with exceptional timbre. Craft Ears Aurum features one PEN Dynamic Driver, four Balanced Armatures, and two Electrostatic Drivers with custom-tuned SES™ 2.0 (Space Expanse System) and True Load™ technology.
We have decided to go with a 10mm PEN Dynamic Driver that works as a true subwoofer. It provides clear, fast, and full, but not overwhelming sub-bass. Lightweight yet stiff PEN diaphragm with N35 magnet makes low-frequency richness to the previously unmatched level in the in-ear monitor world. It will provide you accurate dynamics and exquisite sound quality all at the same time.
Four Balanced drivers with carefully chosen five-way electrical crossover are responsible for mids and highs, making them defined, with remarkably natural voicing and timbre with minimal sharpness. The Dual Electrostatic driver is the icing on the cake. We improved beloved by you in Craft Six SES™ (Space Expanse System). We have tuned it, especially for electrostatic drivers inventing patent-pending SES™ 2.0. We have reached the EST driver's loudness and expansion never seen before, maintaining its speed and softness. Now the last octave is exceptionally clean and refined as it was never in the past.
The Craft Ears Aurum represents outstanding quality without any compromises. It will provide balanced tuning and exceptional extension on both ends with excellent depth, imaging, and remarkable detail retrieval.
Spec:
- 1 PEN Dynamic Driver, 4 Balanced Armatures, 2 Electrostatic Drivers
- Single Sub-Low, Dual Low-Mid, Dual Mid/High, Dual Super High
- Five-way electrical crossover
- Three bore acoustical crossover
- 5Hz - 40kHz (+-10dB into IEC 60318-4 GRAS RA0403 Hi-Res coupler)
- 9,6 Ohm (± 0.8 Ohm 10Hz-20kHz)
Share:
Facebook Twitter Reddit Pinterest Tumblr WhatsApp Email Share Link

Craft Ears Aurum
Pros: - engaging sound signature
- genre versatility
- very detailed
- great looks
Cons: - power hungry
- stock cable only available in 3,5mm
- depth is not flagship-level
- some sounds feel weirdly inversed
For starters I would like to thank @Jedrula1 for sending me a demo unit, which was returned after writing this review. 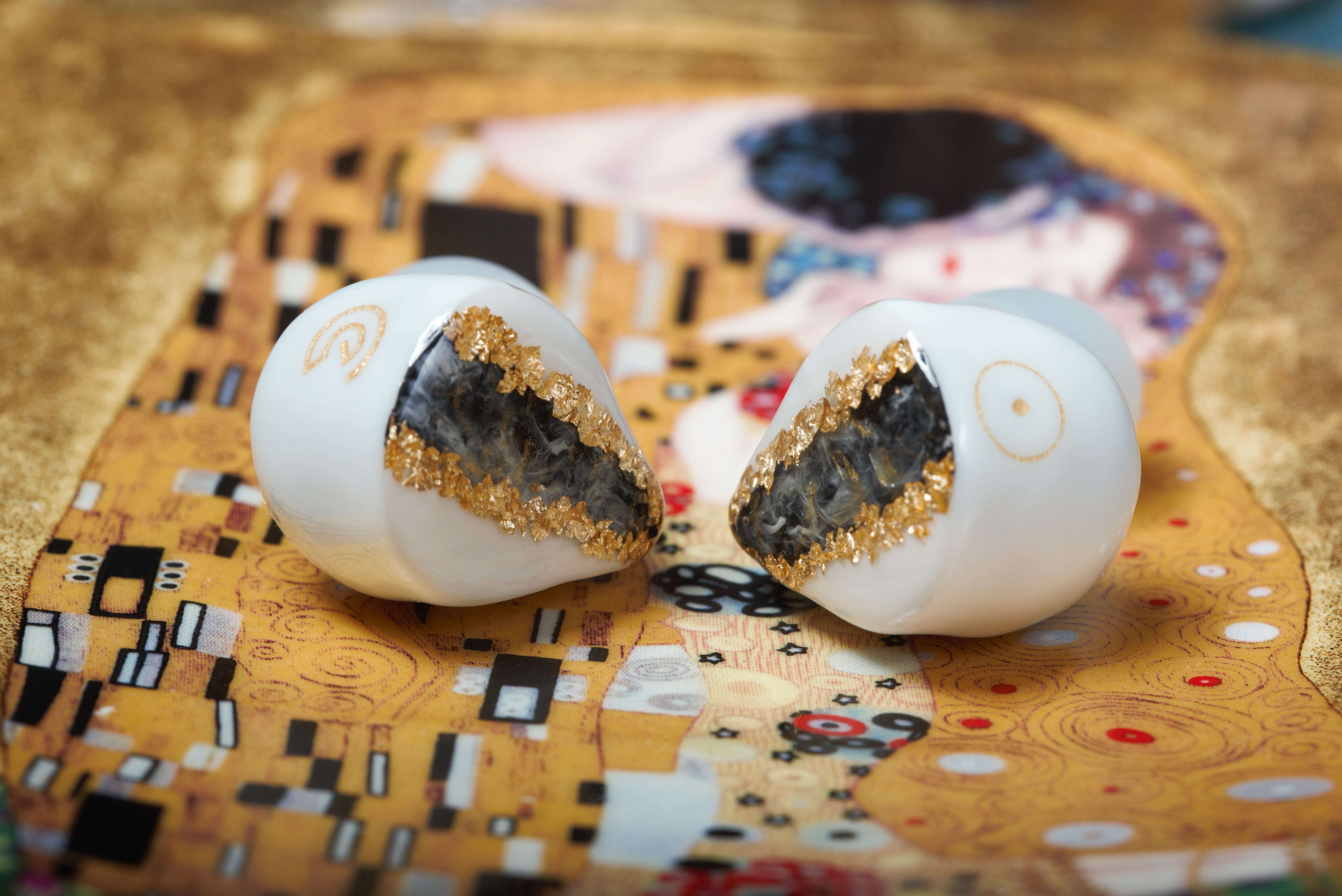 The Heart and the Soul

The Craft Ears Aurum is arguably the hottest release among Polish IEM boutiques. Partially because of being a tribrid (1 DD, 4 BAs, 2 Estats). But also because after premiering with its Two, Four and Six line of IEMs, Craft Ears earned plenty of awards and set the bar pretty high for their next release.
The first thing they score an A for is the design. It’s been stellar since their previous numbered releases, but this time around the Genesis series signature designs really hit it out the park. Aurum’s own just oozes elegance. White universal shells are a rare sight, moreso adorned with golden flakes. Oh, and just to make a statement, the logo was moved to the top so as not to disturb the elegance of the faceplate. Truly worthy of being a bespoke, premium option in a custom design.
Craft Ears followed latest cable trends as well and bundled a premium CM Cable Bright ended in a single ended jack. Its quality is on par with other bundle cables like the PW no.8 which comes with the Lime Ears Pneuma. One thing missing is a chin slider. I’ve come to accept nonbasic cables being added to IEMs - as long as they are not of bankbreaking cost.

Aurum’s sound signature is a very pleasant and masterfully executed W. The bass hits the right spot in authority and quality, but doesn’t overshadow the rest. I might say it takes a little bit of a backseat. I guess this is the byproduct of the tuning requirements when estats are deployed. And boy, is this implementation good - the highs are free of being wispy. Cymbal notes have punch and the decay is above average. Apart from being a drumhead’s delight, this also adds to the air and instrument separation. The mids do not fall behind, either. Female voices are a little closer than male, both are textured and emotional. However, when compared to bass and highs, mids are definitely the weakest link in terms of execution, with guitars sounding a little less refined and missing that final touch of spiciness. All of this sums up to a versatile monitor suitable for plenty of genres like rock, d’n’b, soundtracks and classical in my case.

Being as young as Craft Ears is, how does the Aurum fare against some of the GOATs or heavy - hitters? Let’s start with Campfire Audio’s Andromeda. While playing Red Hot’s “Snow (Hey Oh)”, Aurum’s bass rendition is warmer, fuller, with very satisfying decay. Andromeda 2020 tries its best but bass lines like in this track are just not its forte. Also, cymbals are easier to spot in the left channel after 1:47 mark with Craft Ears’ creation. Thus, my current champion of details is showing cracks in its emerald facade, being beat in engagement factor as well. The Aurum is also hiss-free, but requires current which could power several Andromedas concurrently. But soundstage comparison is no contest with the Andromeda being noticeably more holographic. 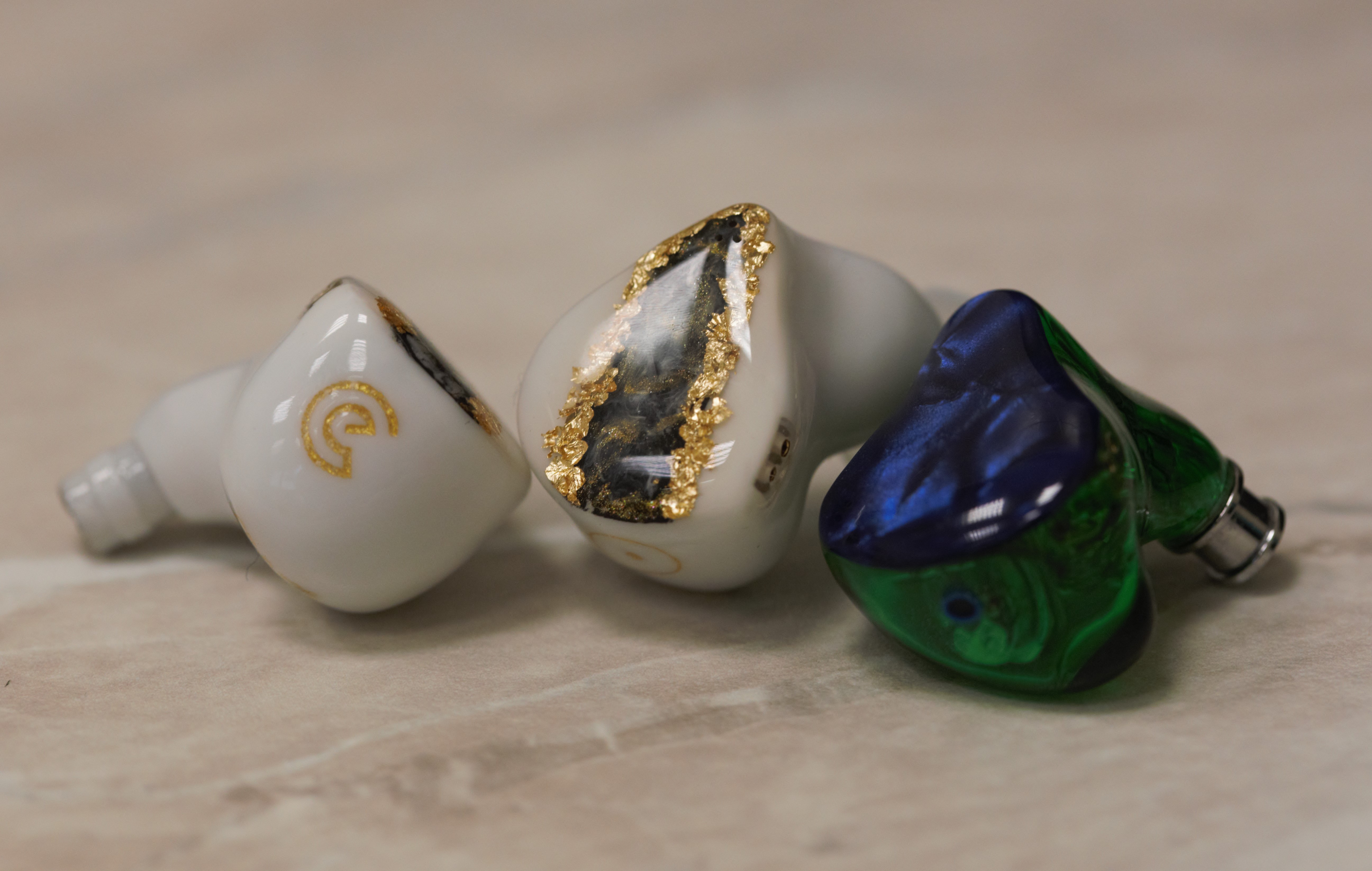 Another one is versus the ThieAudio Monarch (green and blue custom color) - arguably one of the most anticipated comparisons, since the Monarch and the other 3 ThieAudio tribrids launched this particular driver configuration into the stratosphere . Compared to it, the Aurum is less bassy in quantity, but makes it up in its details. This blends nicely with tracks like “Money for Nothing” by the Dire Straits, where I like to keep an eye on the bassist's performance rather than be embraced by Monarch’s sheer amount of bass. The reverse happens with D’n’B or pop tracks, where the former’s bass boost goes hand in hand with the party. Hans Zimmer’s Time allows Aurum’s air and separation shine, whereas the Monarch shows signs of congestion and feels quite claustrophobic in comparison. I can’t shake the feeling the Aurum has all it takes to be the Monarch 2.0, with less dryness in vocals, more defined cymbal hits and mature bass favouring texture over Monarch’s flat but plentiful approach. Overall both are very detailed but if soundstage and airiness are of importance the Aurum is the go-to. The Monarch still is one of the IEMs to beat in its price range, and the Aurum upgrade comes at almost double the price. But if I were looking for a “bigger, better, more badass” Monarch, Craft Ears’ newest flagship would be the one to audition. 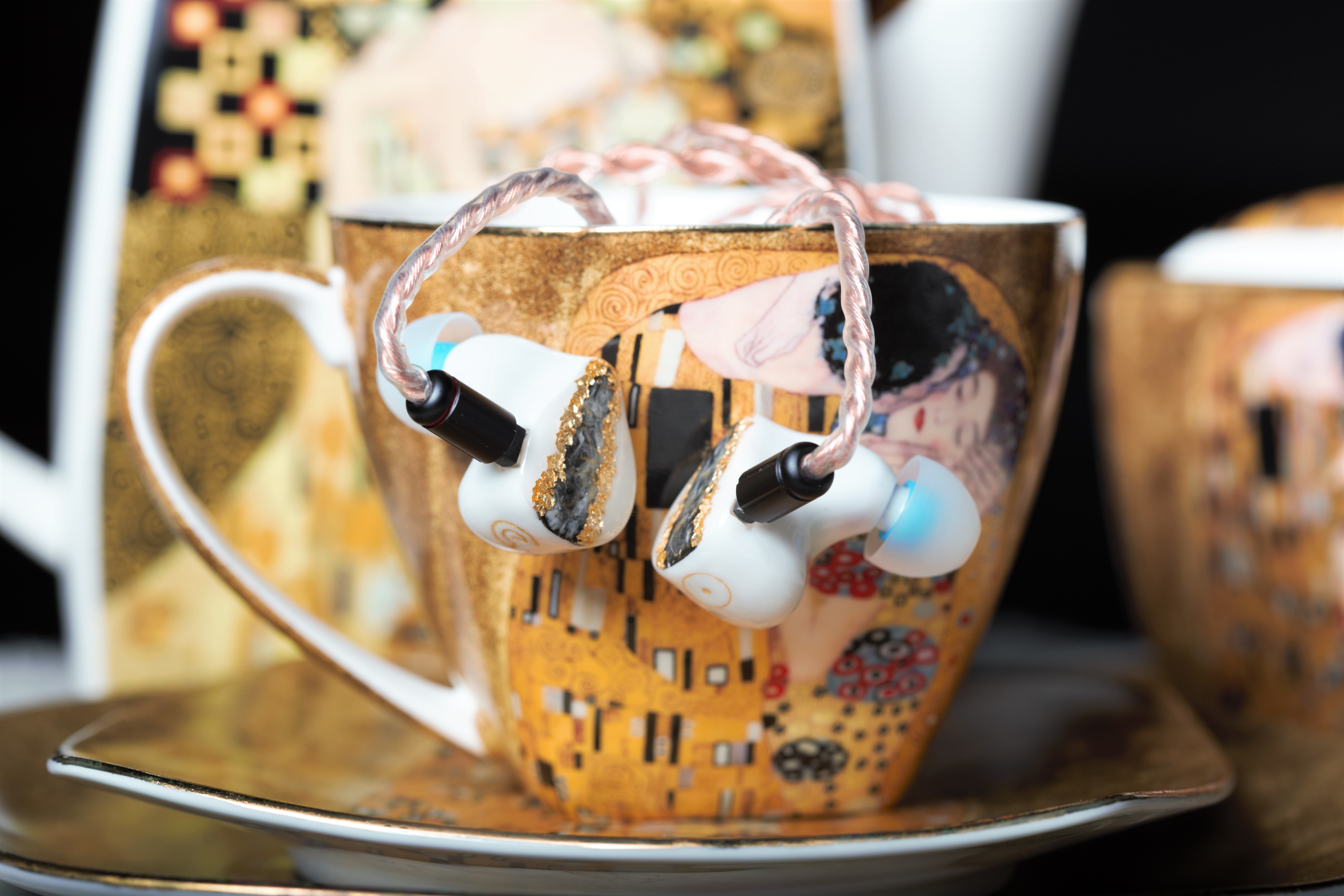 The stock cable, while of premium quality, has a 3,5mm single ended termination. As such, not every source will be able to drive the Aurum properly as it requires a little more current than usual due to electrostats inside. My iBasso DX300 managed just fine (even if pushed a lot more than while driving my HifiMan Sundara), but the Lotoo Paw S1 was reaching max volume dangerously quick. My Samsung S8+ at top volume was passable but nowhere near being driven properly. Dongle users beware. They are also very chonky (again, the downside of its internals) and universal fit may not suit every ear, partially because the part that goes directly into the ear canal is quite elongated.

Soundstage quirks deserve a mention in this section. While shallower than expected at flagship level, something else bothers me. On some tracks, higher notes seem to have a weird inverse rotation to them, distorting their overall placement. As a result, there are times when sounds seem to have a concave shape when positioned behind you, like a part of them was missing. Not a dealbreaker, but I can’t shake off the feeling of this “negative depth” as I’d like to call it. 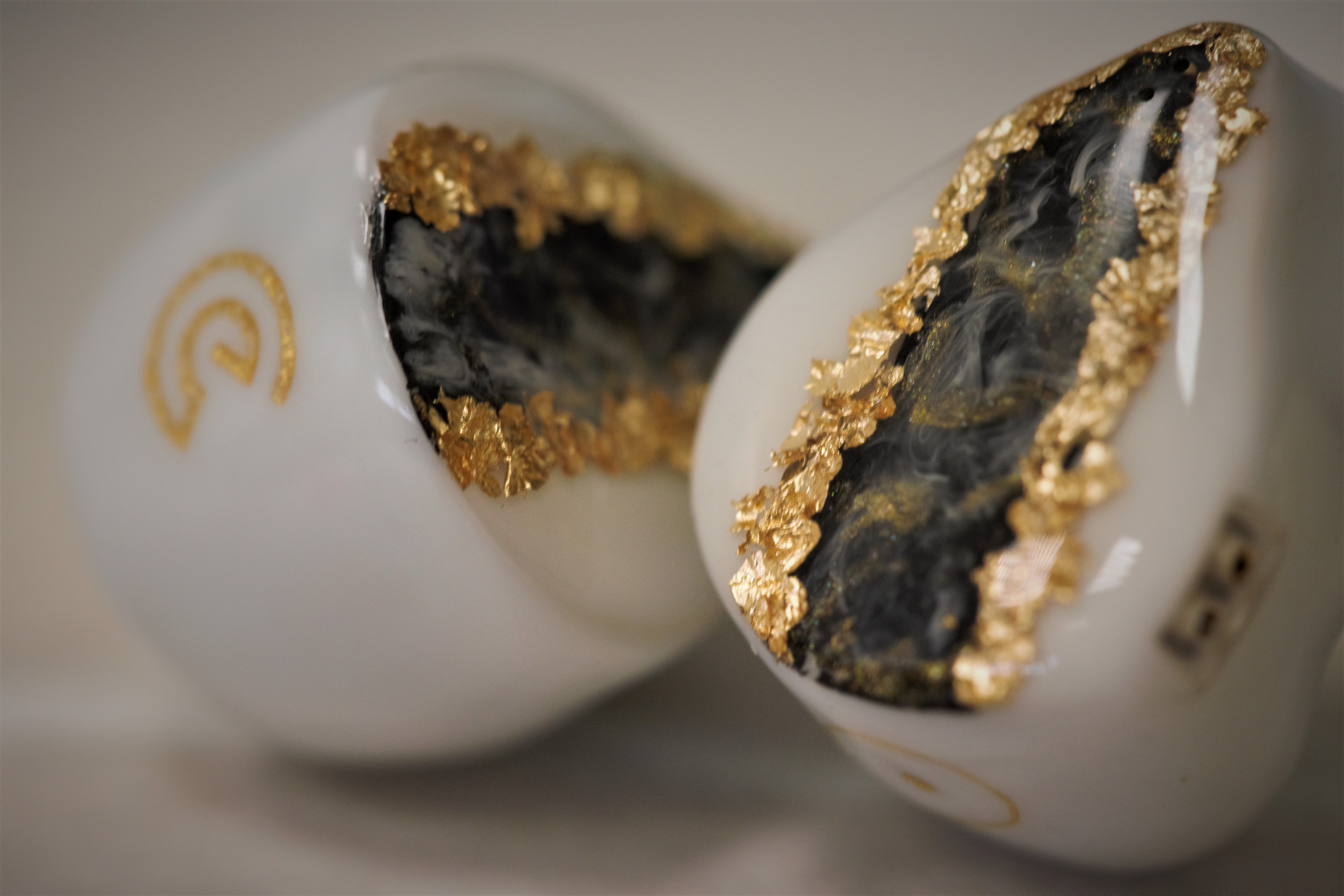 Following your own success is never easy, moreso for the new kid on the block. After my time with the Aurum, I think the record has been set. With a fun, universal tuning topped with great details, this IEM has what it takes to be at the top. If you have a source powerful enough to make its cogs turn, it’s worth taking the Aurum for a spin - you might be in for a surprise.
Reactions: Dim666, nichino, ehjie and 1 other person

Infoseeker
The section you labeled as The Wierd, sounds like some kind of partial Crossfeed like presentation. I wonder if activating a crossfeed would complete the effect. Like the tracks were made to have some kind of binaural presentation.

Beh0lder
Sorry for the late reply. I remember Clapton's "Change the World" being wonky as described.
Read more…