Before I start with my review, I’d like to thank Chord & Major (http://en.chord-m.com/) for the friendly communication and for providing me with a sample of the Major 9’13 (for Classical, $219) and Major 5’14 (for World Music, $239) in exchange for my honest opinion.

The Taiwanese in-ear manufacturer Chord & Major doesn’t fit into the scheme of the typical headphone company – instead of producing various models that differ in quality, they concentrate on in-ears which are technically about on the same level, but feature each a different tuning which is supposed to fit for specific music genres. One could say that Chord & Major, who have “exist only for music” as leading slogan, build IEMs for specific genres, with a matching tonality and tuning. Currently, they have five models in their product range (Jazz, Rock, Classical, Ballad and World Music).
Besides this rather rarely seen feature, Chord & Major products are, similar to some acoustic music instruments, entirely made of wood and metal, and the unique strain relief near the bodies is supposed to reduce microphonics and improve durability.

In my comparative review, you can read how these exotic in-ears sound.

Beforehand, I have to say that this was one of the best unboxing experiences lately – opening the package, it is just obvious that the IEMs and their accessories as well as the packaging were designed and built with a lot of love and enthusiasm in mind.

Instead of using a standard plastic or cardboard box, Chord & Major (hereinafter referred to as “CM”) delivers their earphones in small wooden chests which match the colour of the in-ears. One could think that they might use cheaply made boxes to reduce costs, but no, the wooden chests are well made, have got a nice structure and surface with visible grain, evenly applied stain and transparent, semi-gloss sealing which is more glossy than matte.
The boxes are framed by a cardboard stripe which shows a picture of the in-ears as well as the technical specifications and the delivery content (in a pictographic way) on its outside. Opening the loop, one will find a catchy phrase which says “Every unique wooden box keeps every unique treasure”, which holds true, as the box is really unique and so are the in-ears.
On the cardboard stripe’s inside, there is a brief description of the music genre the IEMs were tuned for, along with a characterisation of how they specifically interact in the frequency range. The right-hand side introduces a representative of the genre, along with brief information about his musical beliefs, style, achievements and major works, and so the 9’13 (hereinafter called “CM Classical”) introduces Johann Sebastian Bach and the 5’14 (hereinafter called “CM World”) Chen Ming-chang.

The wooden caskets have got the C & M logo stamped into the lid as well as their slogan (“exist only for music”) on the front along with a “Made in Taiwan” stamp and a small dent to ease opening of the magnetic lid.
Inside, the following accessories come includes (besides the in-ears): a manual, three pairs of silicone tips, a very nicely made cleaning brush with soft hair, a carrying pouch that matches the IEMs’ colour and has got a snap fastener, and finally a black plastic card for cable management (but I won’t use it because rolling the cables around three fingers and then storing them in a case or pouch is better than rolling them around the card’s sharp edges).

Although the carrying pouches are very nicely made and have got a CM logo as well as a snap fastener that matches the IEMs’ metallic strain relief’s colour and have even got a characteristic music instrument on them (a violin for the Classical and a Yueqin for the World), I would have preferred to see a protective hard-case instead. 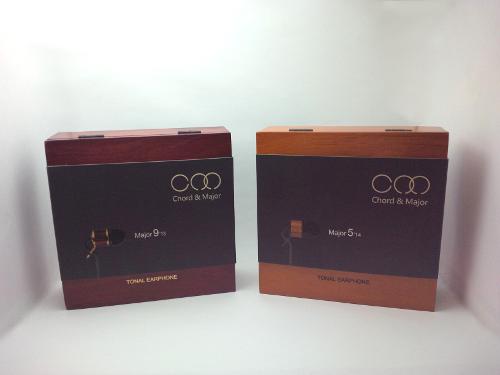 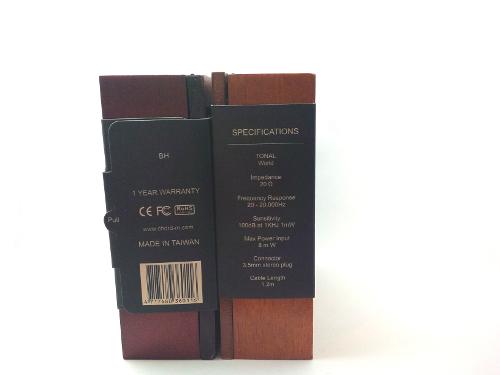 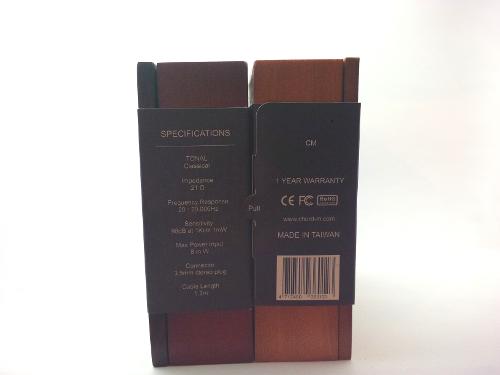 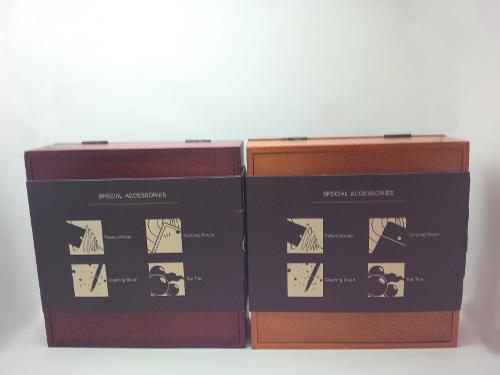 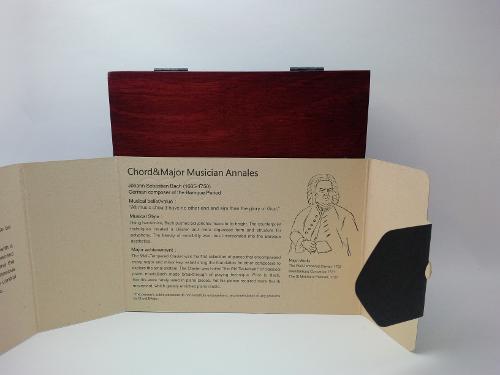 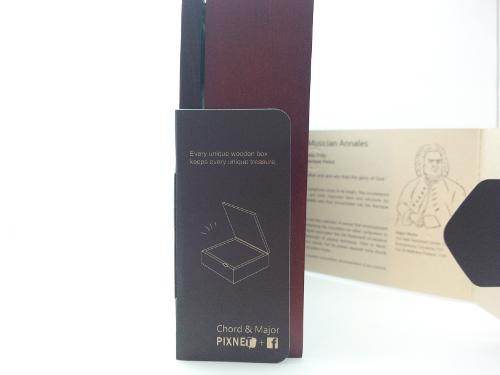 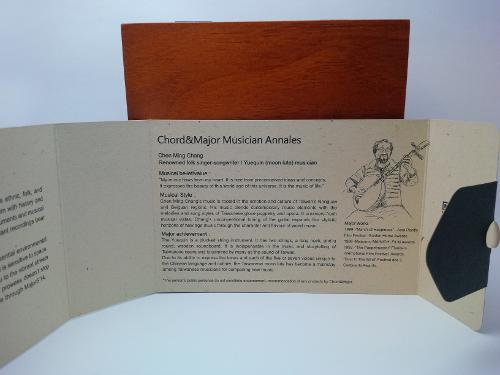 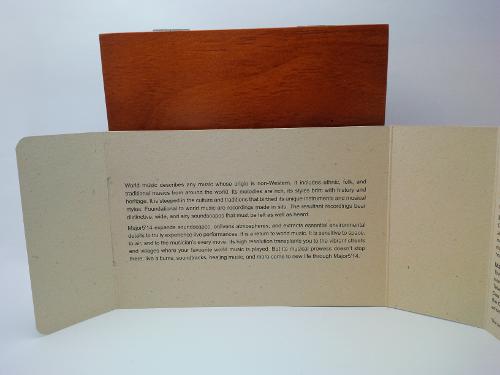 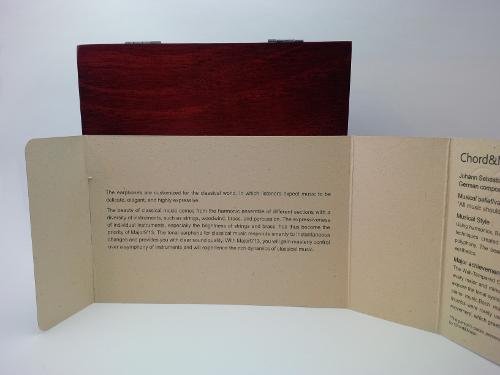 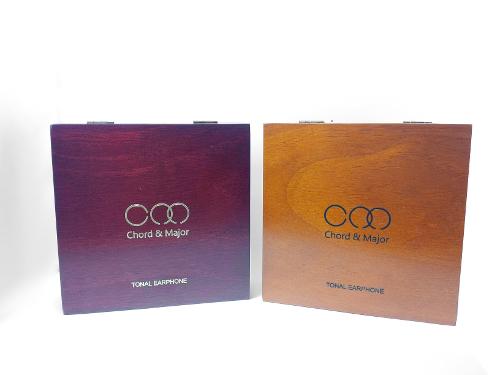 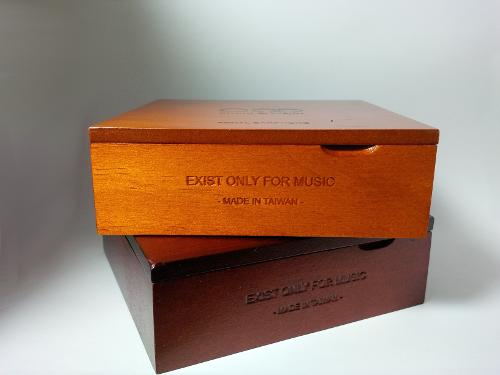 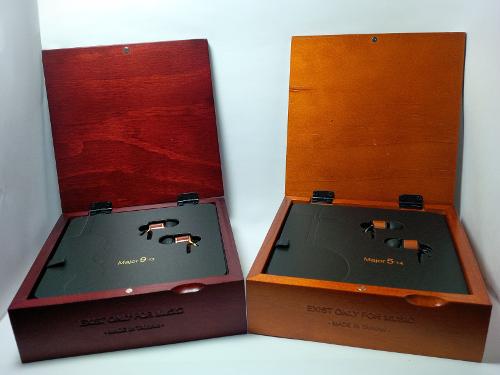 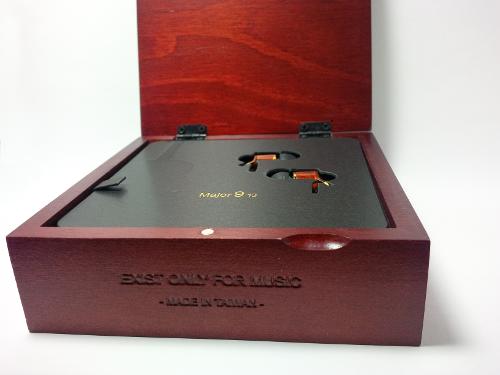 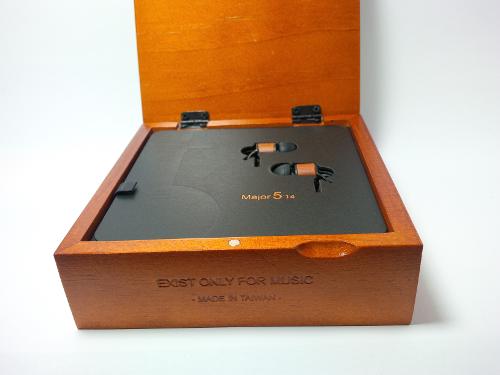 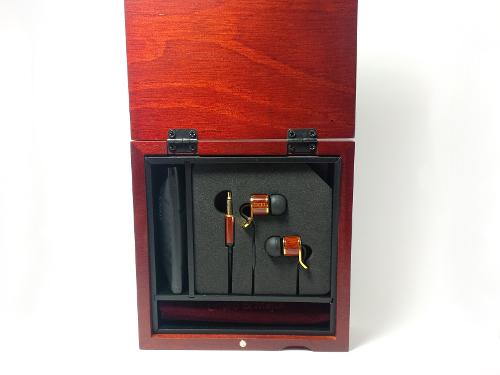 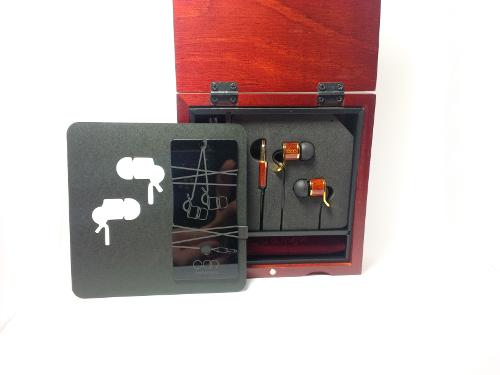 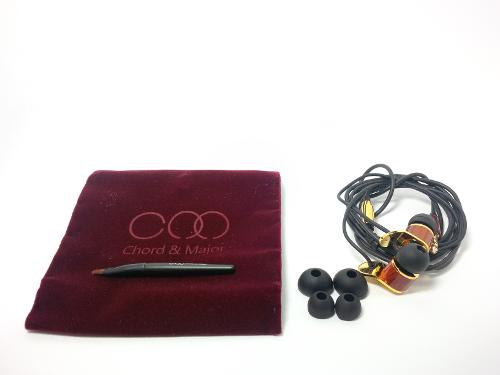 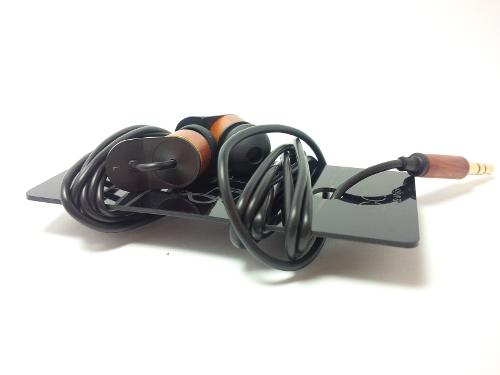 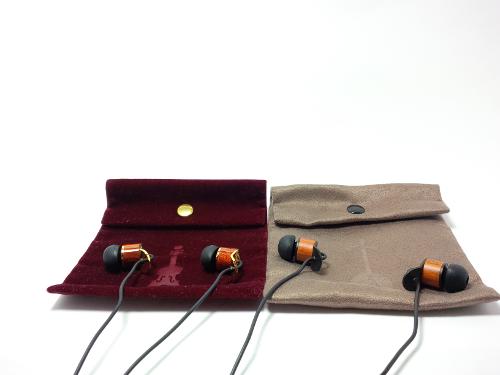 The design of the wooden caskets continues on the IEMs themselves: the CM Classical has got a dark-brown reddish, nicely grained wooden body which is sealed and has got a golden Chord & Major logo on the right earpiece. The front part with the nozzle as well as the metallic strain relief, which also acts as “insertion aid”, and the y-split (which contains the model name) have got a shiny golden finish. As the IEMs are not that big, it is very handy that the metallic strain relief is quite large, so it can be used for taking the in-ears out, wherefore the cable doesn’t have to be pulled. By the way, it also helps inserting them. The straight 3.5 mm jack has got a wooden coating, just like the in-ears.
The cable is very flexible and soft, with a subtle, but very effective rubber strain relief, but I wouldn’t mind if it was a bit (probably 10 cm) longer.
What I find very positive is that the cable has got a chin-slider above thy y-split.

The CM World follows the same design, but has got a less shiny wooden finish which is rather matte and has got matte black metallic parts instead of the shiny golden ones. 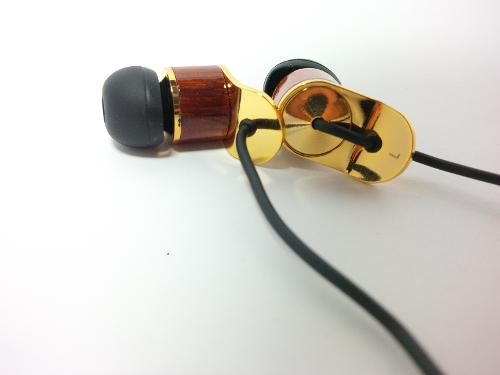 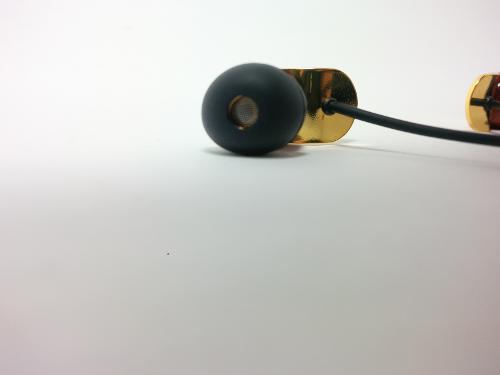 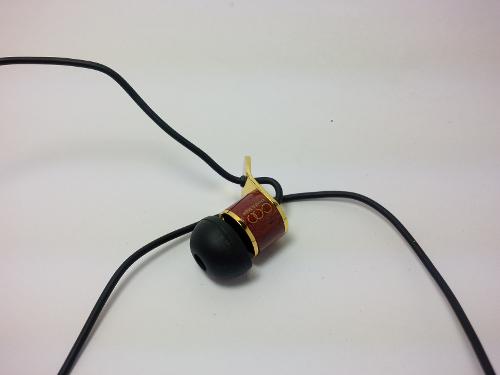 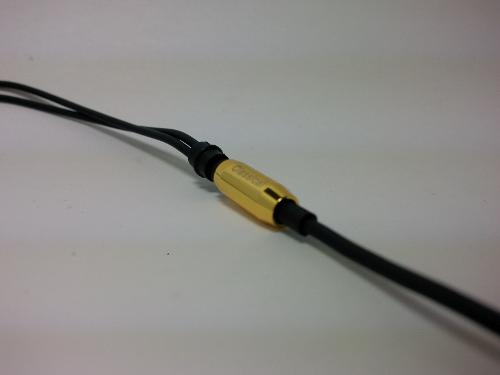 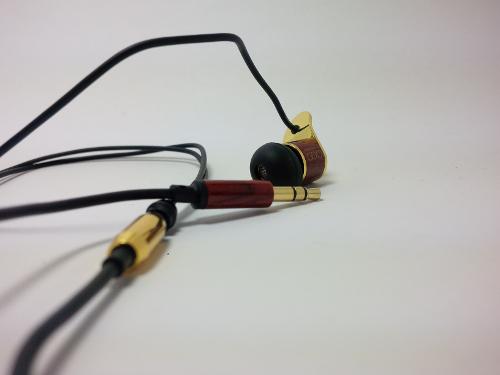 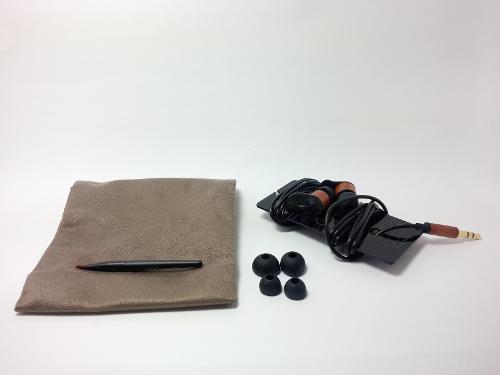 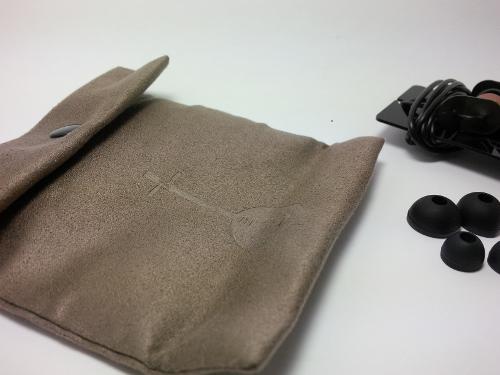 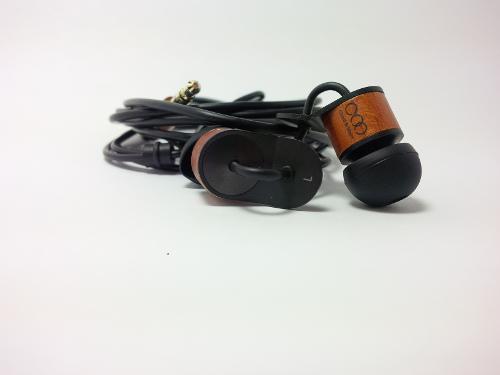 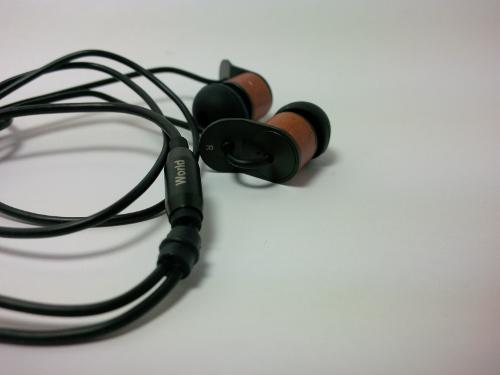 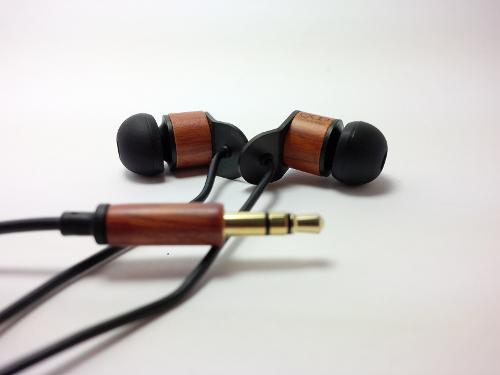 The in-ears are relatively heavy, but are surprisingly pleasant to wear and are very easy to insert and position due to the large metallic strain relief.
The shape also allows wearing the in-ears comfortably with the cables over the ears, which is also my preferred method, as it improves fit and reduces microphonics. Speaking about cable noise: wearing the IEMs with the cables straight down, microphonics are quite low and disappear almost entirely if worn around the ears.

Regarding isolation, the CM Classical is definitely above average in my ears, but the CM World isolates a tad less.

Just in case, I have burnt the IEMs in for at least 100 hours before I began more critical listening. My main source device was the iBasso DX90 which mainly played FLAC files.

At first, I only used the in-ears for listening to the suggested genres, but also changed to other music styles and songs which I usually use for testing after about the half of the time, to get a better overview.

Chord & Major 9’13 “Classical”: So, how does the CM Classical sound? “Bassy, mellow” and “warm” are words that came into my mind first. But it wouldn’t be enough and only a brief impression, so let’s dig deeper:
The lows are clearly present and have got very broad-banded emphasis that covers a lot of the frequency spectrum: from the sub-bass up to the upper bass, level is very even and without any roll-off. Ground-tone is very present and reaches up to the lower mids/upper ground-tone. From 1 kHz on, mids decrease some, wherefore voices and instruments which are located in this area sound darker than usual and also somewhat muffled and dull. At 5.5 and 7.7 kHz, I can hear two peaks, but they are still below the ground-line to my ears, but do a great job in terms of bringing strings and wind instruments slightly into the foreground. In the super highs, level drops somewhat.
Treble sounds very even, gentle and especially very natural. Though, I find that mids are less felicitous: already with orchestral music, I noticed that mids aren’t really tonally correct, which is due to the decreasing level between 1 and 2 kHz. For a better presentation, either the ground-tone would have start emphasising further below or the level in the mids between 1 and 2 kHz would have to be more flat, without that downwards slope. Due to the present ground-tone, instruments in that particular area sound present and warm, but this is a matter of personal taste and won’t have an influence on my evaluation.

The gentle yet realistic treble is very well made and sounds realistic and natural. The lows are clearly present, but don’t appear exaggerated, which is due to the high reaching and even ground-tone emphasis. However, mids aren’t really well made and even with classical music I noticed it, and even more with other genres that feature voices.
In my opinion, the CM Classical’s tonality is well suited to be an all-rounder, as treble is quite even with a gentle upwards slope.

Chord & Major 5’14 “World”: The bass of the CM world is quite similar, although it appears a tad mightier which is because the ground-tone emphasis starting to extend a bit further below, although it still starts quite high. Compared to the CM Classical, mids are definitely better made and have a more even level between 1 and 2 kHz, though voices are on the darker and warmer side as well due to the potent ground-tone. Lower treble is a bit in the background to create room for the following emphasis at 6 kHz. Upper treble is then again more in the background and super highs roll off quite early.
I have to say that the CM World’s sounding really suits well for world music – drums sound lively, close and meaty; plucked instruments appear very natural. The peak at 6 kHz suits in very well and helps to focus on plucked strings. Really, I have to say that the CM World was able to soak me in and could fascinate me with its liveliness when being played with world music.

Let’s start once again with the CM Classical first, although resolution is quite identical on both IEMs. With slow and not-so-fast music, everything is fine and the resolution is quite okay, but one should lower his/her sights and standards and expect a performance which is at least one class below what the price would make you think, as it is rather comparable with more inexpensive models.
Lows have got a good body, but sound a bit uncontrolled and disconnected. With fast music, it becomes obvious that the in-ears can’t keep up with the speed and aren’t able to separate fast single tones from each other: double- and triple-bass kicks aren’t audible as such, but sound rather uniform.
Mids are decent, though they seem somewhat veiled and blurry.
Treble is definitely the greatest strength and sounds very precise, natural, realistic and with a good amount of details.

Continuing with the CM World, I can say that what I have just written for the Classical also goes for the World.
Lows are wonderfully bodied with slow music, but lose some control with fast tracks and sound even a bit slower decaying than the Classical.
Mids are also a bit veiled here, but less than on the Classical.
Also in this case, treble is the major strength, regarding resolution.

Chord & Major 9’13 “Classical”: Let’s keep it short, CM Classical’s spatial presentation is very well made and sounds airy. Lateral expansion isn’t overly wide and still located in my head (yet wider than average), although the relation between width, depth and height is spot-on perfect and harmonically matched, with a wide and pretty precise soundstage that offers a clean instrument separation and even manages to correctly and convincingly display empty space between single instruments.

Chord & Major 5’14 “World”: Soundstage presentation is quite alike, though with less spatial width and an overall more intimate character, but with the same good instrument placement and separation.

The Chord & Major in-ears offer a beautiful, valuable build quality with a lot of passion for detail.
Although soundstage turns out to be very well and there is no roll-off in the sub-bass, detail resolution as well as bass control are below average for the price – I guess that’s a side-effect of the beautiful build quality with wood and passion, which can be seen in the price.
The Major 9’13 Classicas is also quite useful as all-rounder, though it has a rather slow bass decay and veiled mids. The 5’14 World on the other hand is more genre-specific and no all-rounder, but offers the better mids and sounds very lively and compelling with the music it was made for.
Keeping the price and build in mind, I give the Classical 3 and the World 3.3 out of 5 possible stars.
Reactions: h1f1add1cted