Menu
Log in
Register
Bottlehead S.E.X. (Single-Ended eXperimenter's kit) - Reviews
Overview Reviews (3) Gallery
Pros: Price is right, great tone, highly resolving lows and mids, versatile
Cons: Does not extend as linearly as solid state, not analytically tuned, stage does not compare as much with TOTL tubes
I purchased this product myself for personal enjoyment in July 2017. It is a fantastic amplifier that I have truly enjoyed listening to music with. At the time of purchase, I opted for the C4S upgrade, which is an optional component that stabilizes the electric current coming from the power circuit. This upgrade carries multiple benefits over the base product including lower distortion and noise as well as improved bass. In this review, I will compare this product mostly with Mjolnir 2 from Schiit Audio, although Mjolnir is priced slightly higher, at $849 for the base model.

Perhaps the most interesting thing about S.E.X., besides the sound signature, is that assembly is required when purchased directly from the manufacturer. Construction of the amp is a slightly more complicated than building the Bottlehead Crack amp (the lower-tier product from the same manufacturer). However, it remains a manageable challenge, given that this was my first kit after all. The total build time was approximately 10 hours, spread over two evenings.

The tonal balance is great. Not too hot or too cool – imagine a perfect bowl of porridge that goes down smoothly leaving you wanting more. The overall sound signature is detailed with slightly accentuated but well-extended bass. The high end is transparent to the source without a perceptible treble boost. Although the upper range does not extend as linearly as a solid-state amp, it is nonetheless impressive for a build-your-own tube amp.

The mids are buttery, yet not recessed compared to other OTL tube amps or push-pull types.

The bass region is neither as tight nor as deep as Mjolnir 2, but it is still decent. The whole spectrum of sound is remarkably well-represented with a slight, even downward slope in frequency response.

While the sound signature of S.E.X. is detailed, it is also quite gentle. Rather than coming across the eardrums with blunt force, S.E.X. subtly unfolds the soundscape in front of listeners sublimely when compared to the less-subtle, punchier Mjolnir 2.

In addition to the aforementioned, S.E.X.’s dynamic range is simply fantastic. From the subbass to the brilliance, the dynamism of S.E.X. is truly a delight. While certain solid-state amps may nonetheless outshine it in this regard, S.E.X. keeps up the pace remarkably.

The noise floor is low with the C4S upgrade, which reduces interference inside the unit. During testing, when cranked to full volume, I could hear a hiss in the background. However, for my own listening safety, I have never been compelled to listen to music above 10 o'clock on the volume knob (with the Sennheiser HD650).

The sound stage is wide, well-defined, and holographic. Unfortunately, the depth isn’t as satisfying as I have had hoped, but some listeners may still find it satisfactory and acceptable. This is one place where the Mjolnir matches the S.E.X. in sound stage reproduction ability.
S.E.X. has more than enough power and headroom for both planar magnetic drives and dynamic ones alike. Below are my notes on different sets of headphones, listened to at around 80 dbs:

● The rather-demanding AKG K340 (now an uncommon vintage set of headphones from a bygone era) were powered well and sounded punchy through this amp. It is also one of the few power-hungry headphones with which the volume pot needs to be cranked above 12 o’clock.
● With more mainstream headphones like HD650, I could get the volume turned to about 10 o'clock before it becomes a health hazard. In particular, S.E.X. pairs well with HD 650, giving the already-good sound stage a pinch more dynamism while bringing out the liveliness of the music gracefully and effortlessly. It also does wonderful things to the low end, bringing low-frequency details I didn’t know was there before.
● The Focal Clear had a highly addictive sound when paired with S.E.X. and its tasteful bump in the bass frequencies blended well with the amplifier's tonality. This combination made the analytical Focal Clear a lot more engaging than it would otherwise be coming out of lower level amplifiers - a clear cut above the entry-level Schiit Vali 2 hybrid tube amp (which performs incredibly well in its price range).
● When it comes to Hifiman’s HE-560, the synergy between this particular amp and the headphones is unmatched by all other pairings I’ve tried. Unlike some other amps that I have tested the HE-560 on, the HE-560 sounds rich and full of life with the ample power that S.E.X. supplies.

Finally, I paired S.E.X. with different DACs. Among the different DACs I have tried (Gungnir Multibit, Modi 2 Multibit, Chord Hugo), I preferred Gungnir the best, followed by the Modi 2. While Chord Hugo sounded neutral with SEX, some may find the treble region too bright. That being said, the differences between the various DACs are so minute that they are difficult to detect without extended testing. After listening to all of the DACs on S.E.X., I am confident to conclude that most well-made DACs will not disappoint when paired with S.E.X.

Overall, I praise SEX for its low harmonic distortion, wonderfully balanced tone, dynamism, versatility, and the ample power it provides. TL;DR: It is a superb all-rounder at this price range.

ozrainmaker
really well written, obviously you've put some hours into testing
i particularly like the headphone comparisons. now i want one!

Malfunkt
Fantastic write up, and having heard your setup , this is the definitive description of the S.E.X.

Niyologist
Interesting review. Maybe I should start assembling a DAC of my own.
Pros: Beautiful to look at, D.I.Y is fun, crisp sound, transparent, soundstage
Cons: D.I.Y can be daunting to some, accurate bass might be a downside for some, no tube rolling, tube hum
Dat Sweet tube glow 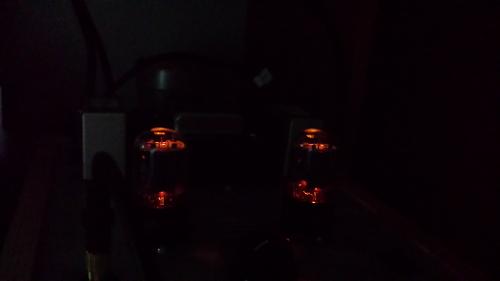 This amp is a pleasure to listen to and build. I wasn't sure how daunting the task would be because I have little electrical experience (The last time I used a soldering iron was a robotics class I took in 7th grade). My build time was approximately 16 hours over 3 days. I have the C4S kit but I have not installed it yet. The amp is pretty simple to build and the instructions that are supplied with the kit are very good. The only thing about the build that is really difficult is wire organization. I didn't care too much for wiring but I assume if you're a neat person it'll save you a little trouble with the electrical components.

I haven't burned the amp in completely I only put a few hours onto it so far, but it sounds amazing. The vocals are really brought forward with this amp and the staging of the sound is incredible. As far as reference tracks I listened to the Richie Blackmore's Rainbow album and the acoustic guitars sounded like they were right in the room and the voice of Dio was just pushed to a new level for me. I listened to some difficult tracks too. Self vs. Self by Pendulum has always been a trouble track for me because as a death metal/drum and bass hybrid song I found nothing did it justice before; car and computer speakers wouldn't cut it. However I feel like everything is really brought forward by the S.E.X and it really makes the song a pleasure to listen to. Another difficult track was Some Might Say by Oasis. This song has so much gain in it I felt like it sounded like a beehive most of the time, but the S.E.X really cleared it up and allows it to sound natural and spacy.

Overall I think the S.E.X amp is fantastic for vocal tracks and it supplies a good amount of bass that is very accurate but not overwhelming.

There is a bit of hiss from the amp. It isn't very noisy but it is audible when no music is playing. I imagine installing the C4S upgrade will improve the blackness for the noise background.

EDIT: I recently upgraded my DAC to a Fiio D03K over optical from my computer and the hiss is gone. I think it was just the cheap DAC I was using before that was making the noise. The amp is COMPLETELY BLACK in background noise. I can't hear any audible hiss until I turn the knob to 90% but I amp playing everything at less than a quarter turn.

Unfortunately I don't have anything to compare the amp to besides my Fiio E11 but this is obviously classes above that. But, I think this really is a world class amp and anyone looking for a beginner DIY project or high quality amp should strongly consider the S.E.X amp.

Here are some pics of my sloppy work 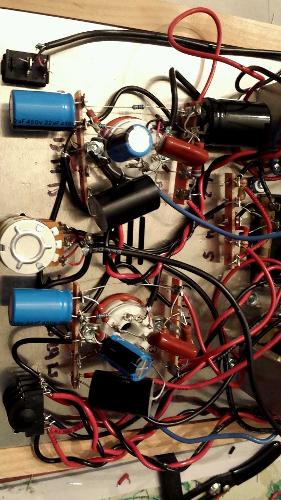 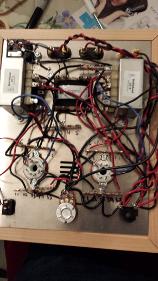 Behemothmanface
I think you did a fine job! Glad everything worked out well.
Pros: Great, clear and transparent sound, drives speakers and a wide range of headphones, you get to build your own, you can customise its appearance
Cons: May be a little lean on the bass for some, especially compared to the Bottlehead Crack
The Bottlehead S.E.X. is the mid-level DIY tube headphone amp from Bottlehead USA. As per the very well-known Crack OTL amplifier, it's a kit that you build yourself, but it's a little more challenging than the Crack due to the extra components involved.

In short, the Crack and S.E.X. both have their own strengths, but the S.E.X. is a definite step up in overall sound (which is a major complement) and it drives all range of headphone impedances, unlike the Crack's limit to >300ohm units.

I've created a full thread to discuss the Crack, the S.E.X., and soon the Mainline, Bottlehead's TOTL headphone amp.

You can view the full thread here: http://www.head-fi.org/t/683012/bottlehead-amplifier-discussion-comparison-thread-crack-sex-mainline

FraGGleR
Great job on the builds and reviews.  I think adding the C4S and switching to 32ohms output impedance will help with the bass.  Running the S.E.X. balanced is also superb.  Swapping caps is fun too.