Equipped with a dual balanced armature driver and a compact design that fits perfectly and comfortably in the ears, the ATH-CK10 is one of the top-quality in-ear headphones on the market. With its high-impedance design, the ATH-CK10 can also provide truly impactful bass. The cord fits comfortably and securely around the ears. Ideal for use with all audio sources, including MP3 and other portable players, they are supplied with small, medium and large interchangeable earpieces for a comfortable, custom fit.
Share:
Facebook Twitter Reddit Pinterest Tumblr WhatsApp Email Link

Pros: Resolving in spades, Airy Treble without peakiness, great imaging and separation, very good build quality
Cons: Not traditionally "musical", lacks body and note weight, requires deep insertion and tip picky, timbre + texture may be offputting
Background:
The Audio-Technica CK10 is a dual BA IEM that was released in 2008, back then in those simpler times, CIEMs were a highly niche market, three BA drivers per ear was considered a lot, and $500 on a pair of IEMs would be considered preposterous. The market that the CK10 faced then is a completely different world from IEMs today, and given the last review for these here was done nearly 5 years ago, how have they held up?

Build and Fit:
The overriding impression one initially gets with these is that they are a very high quality product, the housings are absolutely tiny, with a polished metal faceplate and tough rubber otherwise, the cable is thick, made up of rubbery material, with a straight jack 3.5mm connector on the other side that has plenty of strain relief, unfortunately, the cables are non-removable, and the strain relief on the earpiece side is not stuck to the cable itself, which is a lingering concern.

In terms of fit, these are intended to insert very deeply into your ears, almost ety-style deep, with very small tips, large tips + shallow fit lead to severe loss of nearly all bass, personally I find the deep insertion very comfortable, but YMMV. 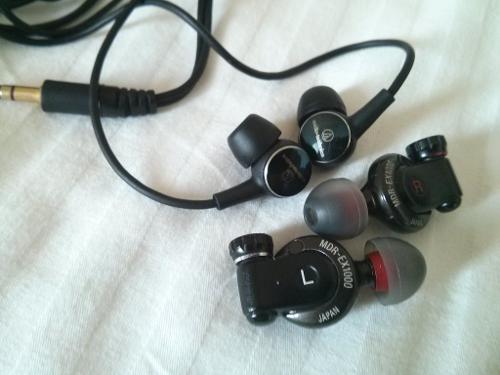 Sound:
So how do these sound? In a few words, unique, clear, and unlike anything else on the market today.

Starting on the low end, the most striking thing that the CK10s convey is their bass, these are bass-light even with very deep insertion, with very little body and mediocre extension, a fact which is highly apparent next to the EX1000 and the Jupiter. In return for that, the CK10s low end has extremely quick decay, punchy, and is blazing fast, able to separate individual notes in a way that very little IEMs are able to do. While I personally prefer the bass in the EX1000 which exchanges some of the speed for oodles of note weight, texture, extension and slam, I could see some prefering the opposite. Also, macro-dynamics in general are significantly behind the Jupiter and EX1000.

In the midrange, these are characterised by clarity and detail, which is brought on by the fantastic imaging and separation the CK10s provide, the stage is large for a IEM, a bit smaller than the EX1000 and easily beating the Campfire IEMs in that regard, individual notes are very well defined in their own space allowing one to focus on individual instruments in recordings. It's very easy to pick up micro-detail in the CK10s, beating the Orion, matching (maybe slightly beating) the EX1000, and only slightly behind the Jupiter. Conversely though, this can make the presentation seem distant and somewhat unnatural, as if the dual BAs struggle to fill up the soundstage, the EX1000 are much better in this regard with filling up it's larger soundstage, making for a more coherent presentation. Another point that detracts from the CK10's musicality is the rather unusual texture/timbre they present, somewhat as if the notes are smoothed over, even if detail is still present. This is problematic for rock/metal, where having some more "grit" is desirable, again, something that the CK10 loses out significantly to the EX1000 (with it's natural texture) on.

The CK10s pick up emphasis in the treble, being brighter than both the Campfires while presenting an interesting comparison with the EX1000, which also has a treble emphasis. Generally, the CK10 will appear brighter than the EX1000, with more treble air present in MOST recordings, however, due to the EX1000s peakiness at the 5k and 7k marks, cymbals will be "hotter" on the EX1000, that is not to say the CK10s are completely problem free in the treble/presence region, they pick up sibilance rather easily, but the unusual texture/timbre, which presents problems in the midrange for some instruments, helps to mitigate how painful the sibilance can be, compared to EX1000.

A thing to add about these IEMs, if you love Trance/EDM in general, GET THESE. The timbre/texture issues become much less of a problem, while the fantastic imaging, separation and speed of the CK10s become highly useful tools to enjoy the music.

Conclusion:
Are the CK10s all-rounders? Not really. But they are a highly capable IEM with unique qualities that make them ace for certain genres, even many, many years after their discontinuation, the CK10s still deliver aspects that are very, very hard to overcome by modern, much more expensive competition.
Reactions: Furiousipaduser, k4rstar and Nostalgia1220
Pros: Extreme technical capabilities
Cons: Timbre and character
I won't write too much about this because there's much that has already been said about it. I've had this for a long time so the new toy syndrome has worn off, and boredom has set in. However recently I've been appreciating its sound more, and decided to share some thoughts.
If you like detail, speed, sparkle and great microphonics, then this is your iem. It is a specialised tool that enables you to comb through any track for deficiencies if you want. This comes with a downside though, and it may bother some people. The timbre is not suitable for every genre, sounding unnatural and sometimes clinical.

This is perhaps the best earphone for trance and other forms of electronic music. The speed and detail both complement the artificial perfection of the genre, and the isolation truly allows the listener to float off into another world. The sound signature is very well suited, with quick bass that never fatigues or congests. The highs are magically sparkly, giving the feeling of space, and the soundstage is quite good as well.

Most other genres are certainly performed to a high degree of technical ability, but whether you will enjoy it as your only earphone is up to you. I find it enough, but there are just some moments where I want something different.

Build quality, comfort and isolation are all near perfect. The plug could be right angled, and the other two are arguably enough for 99% of people 99% of the time.

kostalex
Excellent brief! I may add only:
Highs may be too aggressive for someone ears. Likely, some sources (say HM-602) can help.
--
Read more…