It came to me from Japan through eBay for total cost of $190.69 and I paid no additional custom fees for it (maybe it was my lucky day). It surely is not cheap Bluetooth receiver, so it better be good.

AT-PHA55BT is a decoder and amplifier that operates only in a receiver mode over Bluetooth. It cannot function as an USB DAC. As an older BT standard (BT4.2) unit it forces BT5 smartphones to connect with it using BT4.2, which may result in weaker and shorter signal range, but sound quality wise it works as well as BT5 unit would work. It supports Quality priority mode with its 909/990kbps transfer rate. If you do not believe me, read this article about ldac. It has a two-positional impedance switch and it comes with an attachable clip.

In this review I will compare it with Chord Mojo on Sony xPeria XZ1 smartphone using Echobox Finder X1 earphones, that have “V shaped” sound, and with Koss Porta Pro entry level portable basshead’s dreamphones. I will use iFi iEMatch with Finder X1 to achieve ideal amount of volume and bitperfect playback. iFi iEMatch also helps Finder X1 sound more balanced with impedance setting B.

First of all, let’s talk LDAC.

Comparison of sound of individual codecs
I was able to hear the difference between LDAC, aptX, AAC and SBC. Not that I would recognize them in a blind comparison, but while switching the codec in Developer options of my Android phone, I noticed some slight changes of how these codecs present the sound. They sound different to LDAC even regardless the amount of compression.
- aptX (352 kbps) has louder higher tones, differently (less mellow) sounding bass. Compression is somehow apparent with aptX. LDAC sounds more rounded and less harsh.
- AAC (250 kbps) sounds more similar to LDAC to me, but I could recognize the amount of compression in direct comparison with LDAC. Compression makes the aftersounds sound shorter, therefore notes sound less defined, everything sounds a little distorted, especially drums. It is even more apparent with SBC (192-320kbps).

The compression algorithms make all codecs except LDAC sound somehow sharp. It is less apparent with AAC (but it still is), more apparent with aptX. LDAC sounds fine, natural, well-aged, rounded. Ops, sorry, are we not talking Single Malts here?

Shortcomings
Bluetooth signal does not reach far (with any of the codecs). Switching between LDAC's Connection priority mode and Quality priority mode seem to have a little or no effect at all. 3-4 meters, and it may start to drop the signal. It behaves standardly as other class 2 BT4 devices I tried, maybe a tiny bit worse. Walking outside with it (on a street or in a bus or underground) and listening to it in an office while sitting and having it in a pocket while phone is on a table close to computer is perfectly fine. It does not pick interferences from other devices near to it (as Mojo does) as far as I noticed. Some ugly signal drops may occur occasionally at home when there is a heavy data load on a Wi-Fi networks around you. Maybe in this situation may Connection priority mode come in handy. As I understand it, if it supported BT5, it would behave much better in all these situations that I described. It behaves fine while moving around near your smartphone in a room, just pause the music (short press PLAY/PAUSE button) for a moment before you walk outside of your room. If you switch your receiver OFF and ON again, it plays a short pleasant sound to let you know it automatically reconnected, but after you short press the PLAY/PAUSE it may struggle to continue playing the song again. I discovered, that if you long press PREV or FORWARD button first (this is supposed to set prev/next song) and short press PLAY/PAUSE afterwards, music starts playing again. Short pressing PREV and FORWARD buttons changes the volume.

The clip does not hold the unit tightly and securely, it tends to fall off. Apply a bit of Bondic (plastic welder) paste to fix it in place.

It does not play music while being charged.

Additional advice for Americans: Do not blend it, it would blend. If it falls in your beer, just softly lick out the remaining beer and use it as an underlay for your table from that time on. Do not try to eat it. Do not use it under water. It does not protect you against bullets.

Enough talking. How is the sound? 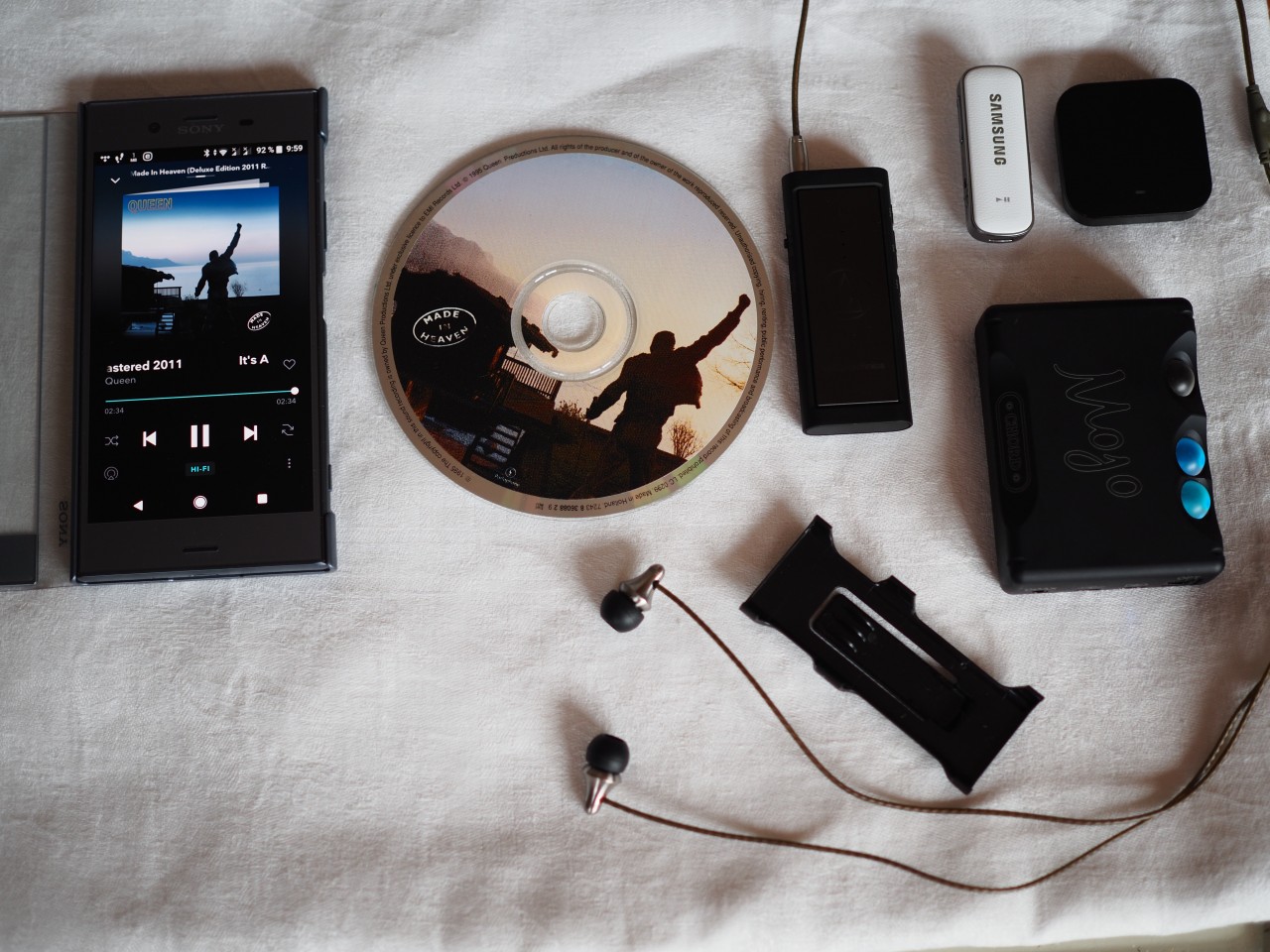 Comparison with Mojo [audiophile grade portable dac] on Echobox Finder X1 [$90-200 V shaped iem]
I recently purchased OTG cable for Mojo (Shanling L2: Usb-C to MicroUSB angled cable) and now I am about to compare the sound of Mojo (that is 2,5x expensive then AT-PHA55BT...) on my xPeria XZ1 smartphone with the sound of AT-PHA55BT (on B impedance setting + iFi iEMatch set to High sensitivity -> this way it sounds best) using Tidal HiFi and LDAC Quality priority mode on my not so high end, but quite ok V shaped earphones Echobox Finder X1 (with reference filter attached). So...

Metallica - Master of Puppets
Mojo has darker background. Mojo is better pronounced. Separates instruments more. Bass is tighter. Mids bite into your ears. Highs have maybe a little too much of a sparkle. It sounds alive and pleasing, maybe a little too "V sound", but that is the fault of these earphones.
AT-PHA55BT is less tight, muddier. All frequencies(instruments) are less articulated, more mixed to each other. It still has glimpse of tightness of bass. Mids are more present, it lacks the annoying and lively sparkle of Mojo, therefore it sounds more relaxed. Less dark background and worse pronunciation result in somehow halved audiophile experience.

Dire Straits - Walk of Life
Mojo's soundstage is a little narrow. But it keeps dark background and well pronounced notes. These earphones have very clear highs that tend to sound too bright especially with Mojo. It clearly shows that midrange on these V shaped earphones is suppressed. The articulation is impressive.
AT-PHA55BT - the sound is well controlled and articulated, highs are less disturbing. It does not sound muddy at first, just a tiny bit if you focus on it more. The sound is very pleasing, it just lacks some of the finesse that Mojo provides.

Frankie Goes to Hollywood - Relax
Mojo - bass bites. Great control. Reverberation (aftersounds) of drums are there, they sound really deep. So black.
AT-PHA55BT - bass bites less. The detail is there. Separation is perfectly fine. It sounds wider. Reverberation (aftersounds) do not create such deep feeling on the background. They only sound well. Its background is not black at all. Mojo is three levels above it in the terms of the blackness of the background.

Comparisons on Koss Porta Pro
tallica, Dire Straits, Frankie
Sound of Mojo is muffled. It is terrible match for Koss Porta Pro.
AT-PHA55BT (B setting, without iEMatch it sounds best) sounds better, in fact it is still too bassy but it sounds surprisingly good. It has meaty bassy sound and quite pleasing highs as well. Actually, it is surprising to me, how well the highs are presented. Sound is overall very good. It lacks some of the detail from the IEMs, but it plays really nicely across all frequencies (even mids). The voices are perfect.
Smartphone - Not too bad. Better than Mojo. Bass sounds dull (Frankie has lots of deep drum sounds and they just all sound bad). AT-PHA55BT is the clear king here. It makes the Porta Pro sing.

Dire Straits
AT-PHA55BT has more bass and less air. Is darker. This song needs an air to sparkle, so Mojo sounds considerably more enjoyable. Articulation with AT is not too bad, it just does not have the levels if finesse as Mojo.

Frankie
Same. AT has worse articulation and is darker on already dark iems, that benefit from brigthness of Mojo.. These iems are perfectly matched by Mojo actually. Mojo cleans their sound, adds hint of brigthness and speed, and keeps the good stuff these iems do: to show the amazing texture of instruments and voices in lower frequency spectrum in an extraordinary way.

--
It is not powerful enough to drive my HE-400i sufficiently.

Summary
It lacks some of the Mojo finesse, but it does exceptionally well with lower end headphones, and it stands a ground with middle tier IEM in resolution and a little less in pronunciation and tightness.

The question is, how well would it sound with higher end IEMs was answered in May 2018 with Acoustune iems. First, it has darker sound signature than Mojo, so some bright IEMs may benefit. It also sounds less well articulated, so you would not reach 100% potential of your IEMs. Still, it plays nicely and it has nice naturally sounding sound (with some warmness to it): nice and soft, so it may be well suited for you when you are on move or if you want to have a relaxing listening session.

Will I use it instead of Mojo on the go even with Acoustunes? Yes I will, because it gives me a comfort of wireless use.

Why only 4 stars? I decided to go against the trend to give 5 star ratings to everything, In its league it would earn easily 4,5 - 5 stars. In my use case league (definitive portable soulution league) it simply needs to compete against best portable solutions out there, and there it plays as a solid 4 star team. To simply put it, despite my 4 stars rating it may be the best sounding or one of the best sounding portable BT receivers as of February 2018!
Reactions: bidn and Researcher