A&futura SE200 - Double Shot
Pros: Option to select "own" sound.
Excellent sound of AKM tract.
High-quality sound of ESS tract.
Decent power.
Simple and intuitive interface.
Large bright display.
Non-trivial design.
Cons: Mediocre ergonomics.
Easily soiled surfaces.
Display distorts colors at an anle.
Expensive.
Intro
This player is the second in the A&futura line. Before it there was the "hundred", and after - the SE180 model was already released. Futurism, arising from the name of the line, is reproduced not only in the appearance of these players, but also penetrates into their structure with various innovations.
You can watch the full video review on the "SoundPrice ENG" YouTube channel: 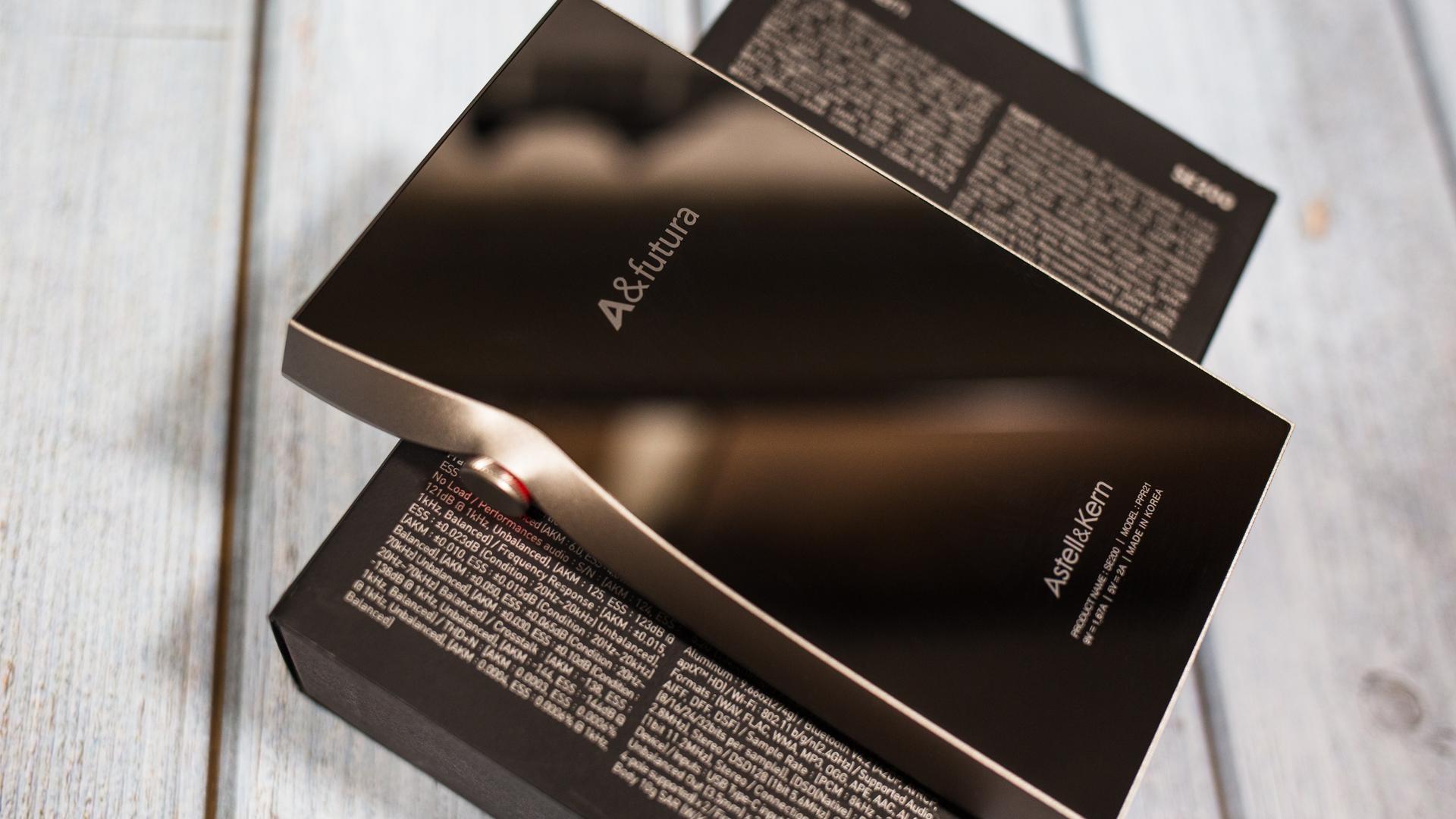 Specifications
The main feature of the 200th "Futura" is the presence on board of two independent circuits with DACs from two of the world's leading manufacturers: the Japanese Asahi Kasei Microdevices and the American ESS Technologies.

The top chip AK4499EQ came to the Korean device from the land of the rising sun, and the American school of DACs is represented by a pair of ES9068AS DACs.
Both circuits have their own amplifying stage and separate outputs to regular 3.5 mm and balanced 2.5 mm jacks.
The maximum output level that the player can provide is 6 rms volts, it is available at the balanced output of the AKM circuit.

The brains of the player is a mysterious eight-core processor, the name of which the manufacturer does not disclose.
The player is equipped with a 5-inch HD touch screen, 3700 mAh battery and 256 Gb of internal memory.
The body of the player is made of aluminum. The back panel, as well as the top end, are covered with special ceramic plates.

The controls are represented by a touch screen and a touch-sensitive “home” button, four “physical” keys, and a volume control encoder.
Around the encoder is an LED indicator ring that can change color depending on the type of audio file being played.

Accessories
The delivery package of our today's hero includes: a USB cable, a quick start guide and a warranty card, a pair of caps for the microSD slot and two protective films for the display and ceramic surfaces of the player.

Interface
The inner world of the player is almost completely identical to what we saw in KANN Alpha. The speed and logic of work, access to wireless capabilities, APK support - all this is similar here (It will be important for fans of wireless technologies to know that the LDAC codec is not supported by the player).
This is a convenient and user-friendly interface. It's easy to get used to if you haven't used Astell&Kern players before.
The firmware works smartly, does not buggy, does not freeze. I didn't notice any significant problems. 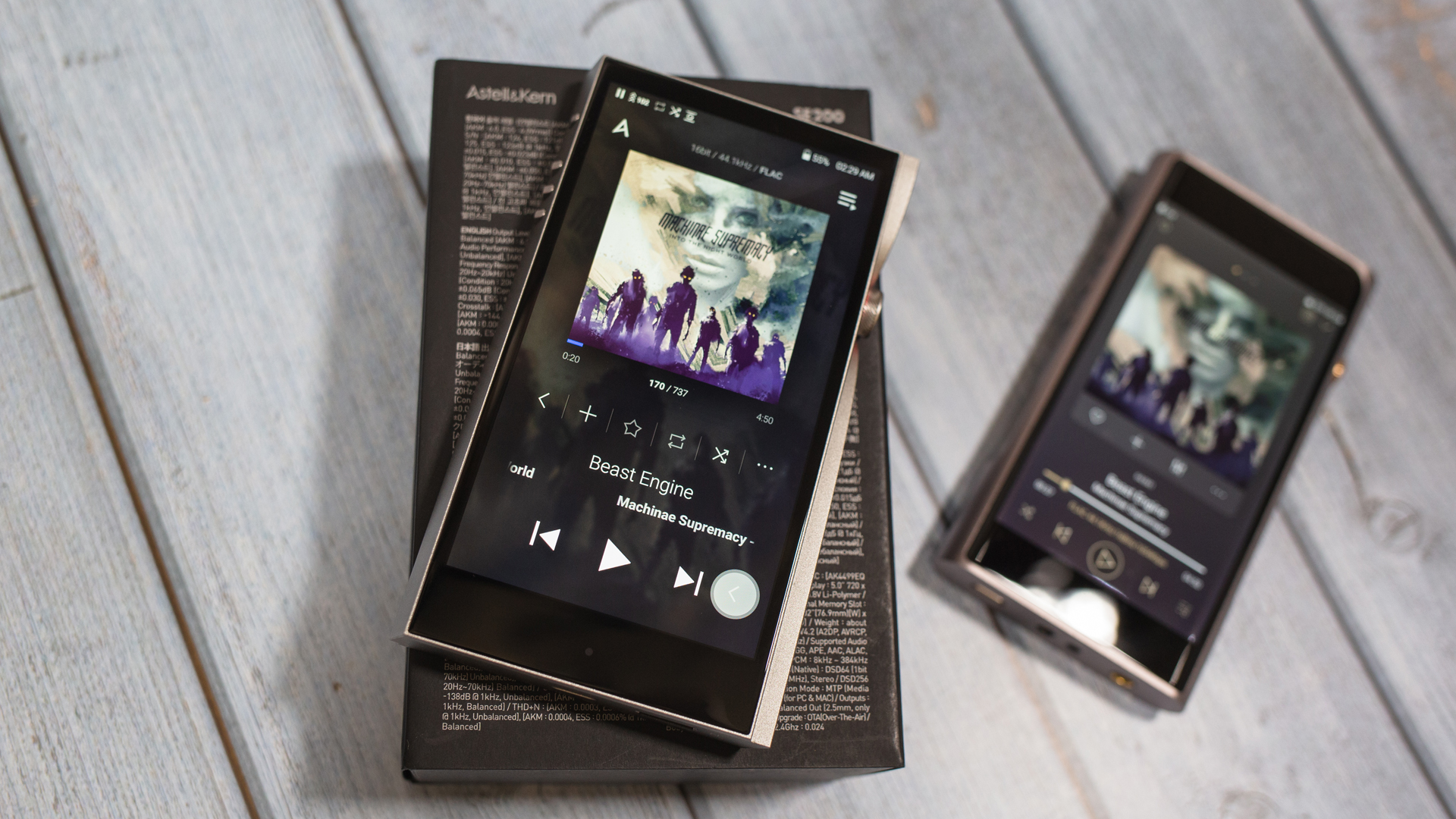 SE200 has a bright high-quality screen, which is a pleasure to look at. I will only note that when the display is rotated at different angles, the hue changes from blue to yellow. But if you look at the player from the usual angle, the color reproduction is excellent.

Using the USB type-C connector, the player can be connected to a computer for file transfer or use as a USB DAC. The device is charged through the same port.

In case you have any questions about the functionality of the 200th Futura, I will leave links to the player's manual in English and Russian:
A&Futura SE200 user guide [ENG]: https://www.astellnkern.com/system/...685867.pdf&name=SE200_instructionbook_ENG.pdf
A&Futura SE200 user guide [RU]: https://www.astellnkern.com/system/...2ae9a9e.pdf&name=SE200_instructionbook_RS.pdf

Build
I would call the design of the player uncompromising. Sharp corners, chopped edges and mirror surfaces. It seems that the designers kicked out the ergonomics specialists and drove them to other projects.

The player is certainly beautiful and noble. His appearance combines rigor and grace, and straight lines coexist here with smooth curves.

User experience
But using such a device, as you know, is not very convenient. And that's putting it mildly. The player is wide, which in itself can be a problem. But there are also sharp corners that can become the scourge of your pockets. In addition, It’s quite possible to scratch your hands about them.

Because of this, once again you don’t really want to go into your pocket for the player, but sometimes you have to, since the encoder on the back side is half closed by the influx of the body, and it’s easy to turn it only from the front.

Ceramic panels are pleasing to the eye and amuse pride, but they are very, very easily soiled. So a microfiber cloth will become your constant companion.

What is the conclusion from all of the above? A solid leather case is what is missing in the 200th Futura kit.

The positive aspects of the ergonomics of this device, in addition to a friendly interface and more or less handy buttons, I would also include an acceptable body thickness. Especially when compared with the players of the KANN line.

It turns out like this... Alpha is difficult to stuff into a pocket because of the thickness, and 200th - because of the width and sharp corners - in general, parity... but Alpha lies better in the hand.

Compatibility
The output impedance of the player does not exceed 1 ohm for unbalanced outputs and 2 ohms for balanced ones. Thus, according to the unwritten rule of "eight", you can fearlessly connect headphones with an impedance of 8 ohms to our Astell. 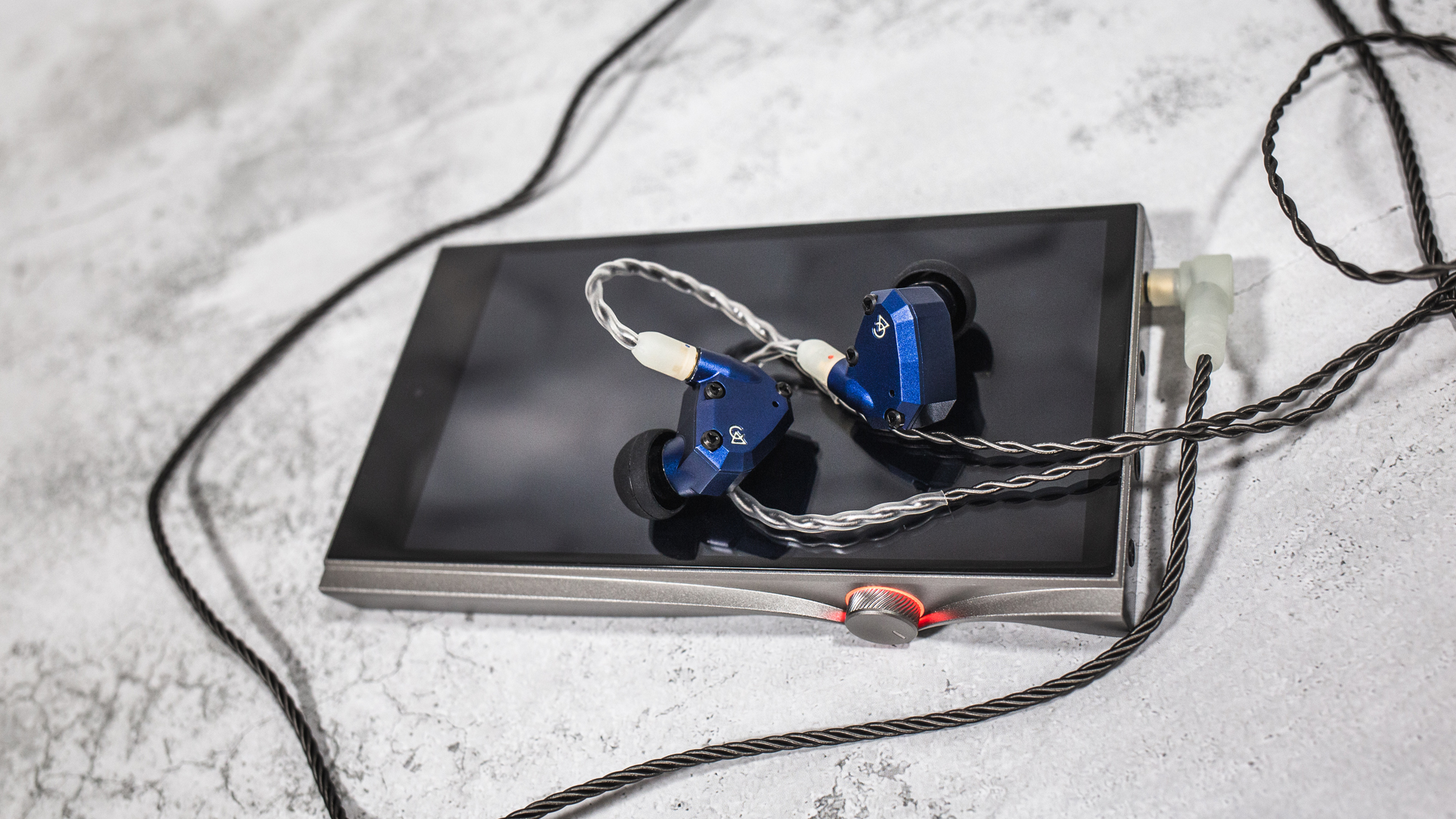 There is not too much power in the player, but not a little either. I think that it will be enough for the vast majority of IEMs, as well as for many over-ear models, with the exception of high-impedance and tight planar headphones.

What are two tracts for?
The presence of two independent circuits on board this "Futura" determines its uniqueness. After all, in fact, having the 200th, you have two players instead of one. At any time, if you wish, you can switch to another DAC (or DACs), and get an alternative sound.

There is an opinion that such an option is redundant, since, they say, the choice in favor of one or another circuit will be made once and for all. I'll not dissemble, this is a quite probable scenario, especially for some headphones alone.
But after all, you can change the headphones at any time, which means that you may always want to change something in the signature of the source. And here Astell&Kern immediately has something to offer you.

AKM sound
As for my personal preferences, I liked the sound from the AKM circuit more. It is both detailed, voluminous, and saturated at the same time. There is no inflection towards the bass or treble, there is no feeling of excessive closeness or detachment of the music.

I would characterize the sound of the player from the AKM outputs as an almost perfect balance between resolution and emotions. Here, the delicate velvety treble is adjacent to the explosive bass and juicy mids.

The lows here are devoid of accent, but have good depth and texture saturation. The mids are a little emphasized, but perfectly balanced and well worked out. And the treble surprisingly combine visibility and unobtrusiveness.

Yes, this sound is devoid of zest. Well, do you need it in the player? Or maybe the highlight is that the music without a strong tint sounds natural, but delicious at the same time?
In addition, for a "zest" you can always go to the neighboring outputs, where the ESS chips rule the show. 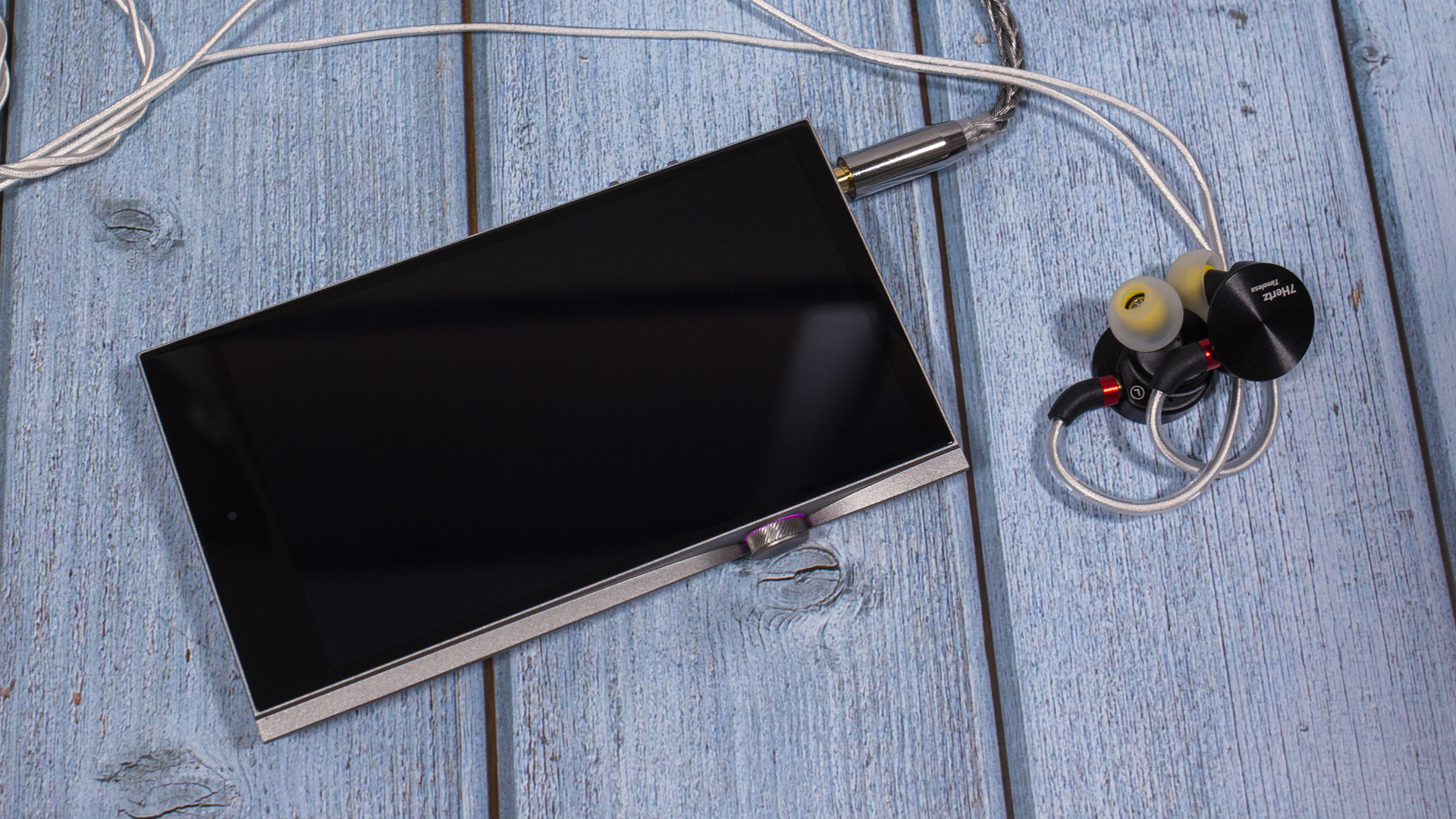 ESS sound
The Sabre circuit presentation sometimes seems more interesting to me on dynamic metal compositions due to a denser and more focused punch, as well as a sharper guitar sound.

The high voices of the singers are heard better, but they seem to be slightly moved away from the lower middle. Because of this, there is a feeling of a drawdown in the midrange as a whole.

Conclusion
Instead of a conclusion, I would note that the SE200 is, of course, a cool and unique device that will no doubt arouse the interested glances of colleagues and the white envy of fellow audiophiles.

But personally, I would prefer exactly the same, but without the Sabre tract, more compact, with a more ergonomic body shape and cheaper. In short, another. yes ...

In general, what I want to say. If I were Astell&Kern, I would take an AKM tract from here - if, of course, these chips are still on the market - I would put it in a smaller body and add a pentacon. A very strong model would have come out.