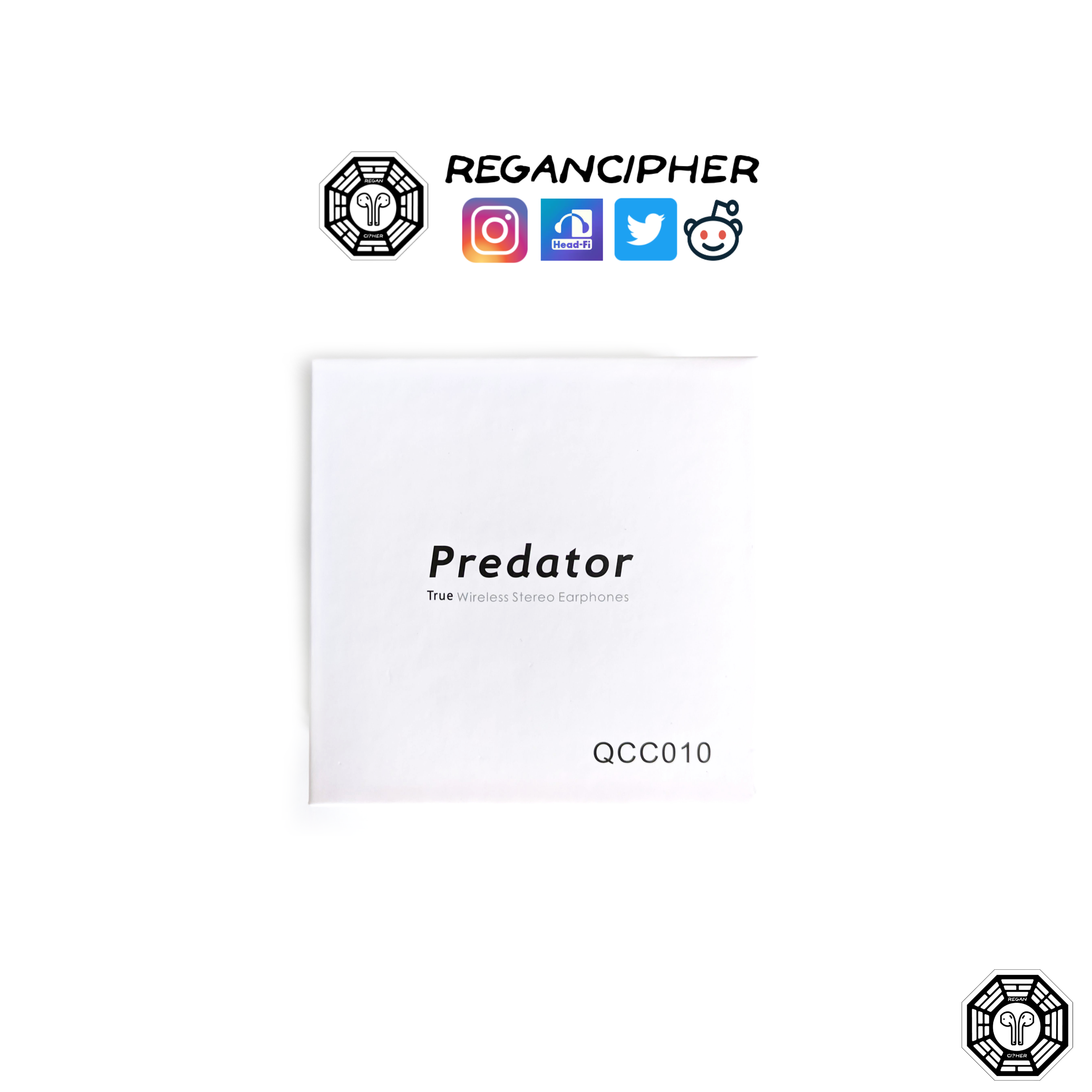 Who are Alien Secret? How the hell should I know?! I only just recently found their website, and the first thing you see is their Airpod clones. Not exactly inspiring!!

Despite that, the QCC010 or Animobuds or whatever they are called, looked very impressive on paper. Using the Qualcomm QCC3020 chipset, the product defied their lowly price on paper. I've had this situation before with both the Whizzer E3 and Boltune BT-BH024 and been pleasantly surprised, so I was hoping for more of the same with the Predator, QCC010, etc... 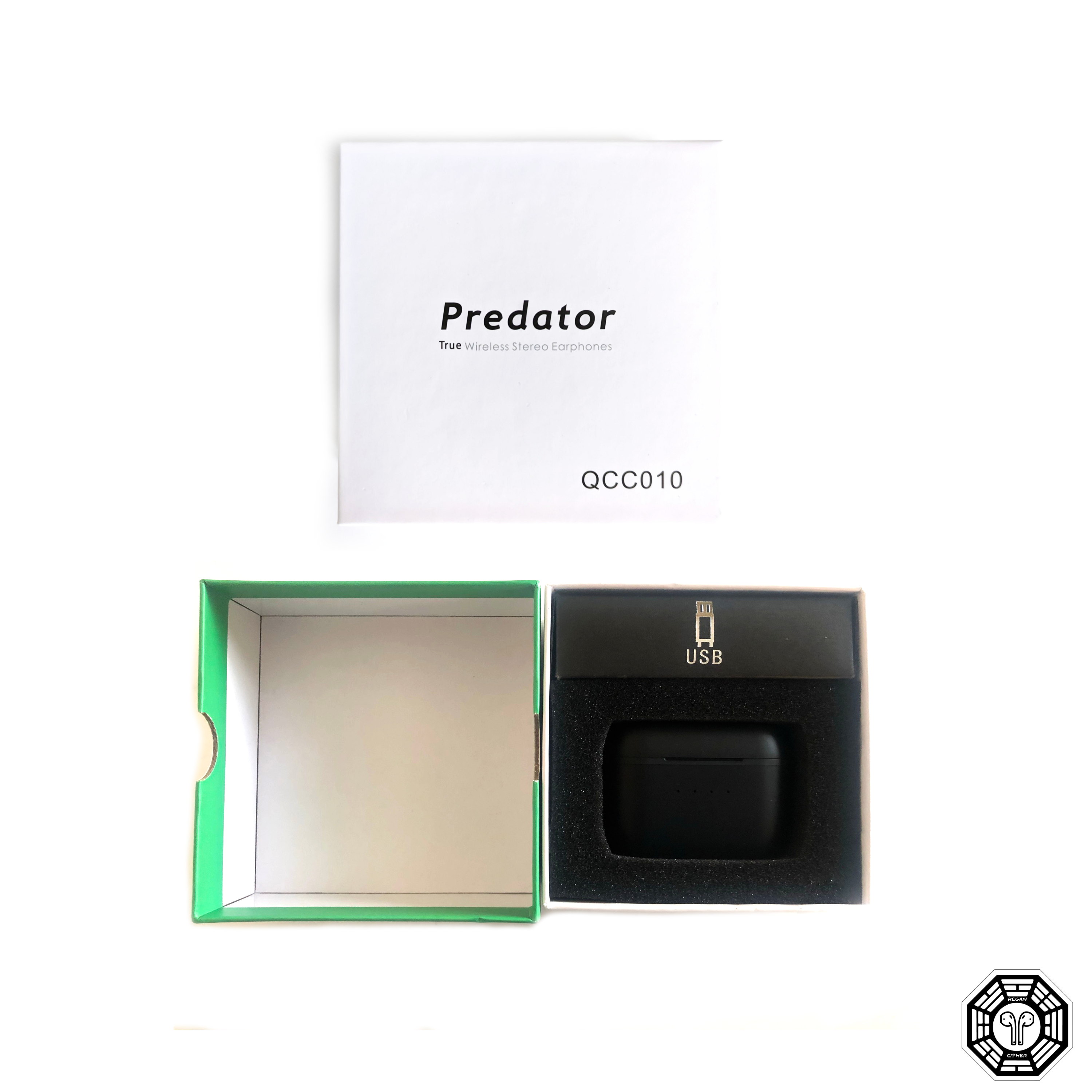 Alien Secret are not going to win any awards in the unboxing category. The buds arrive in a very basic plain white box with a very flimsy set of instructions. Seller advertised free foam tips but they weren't included. 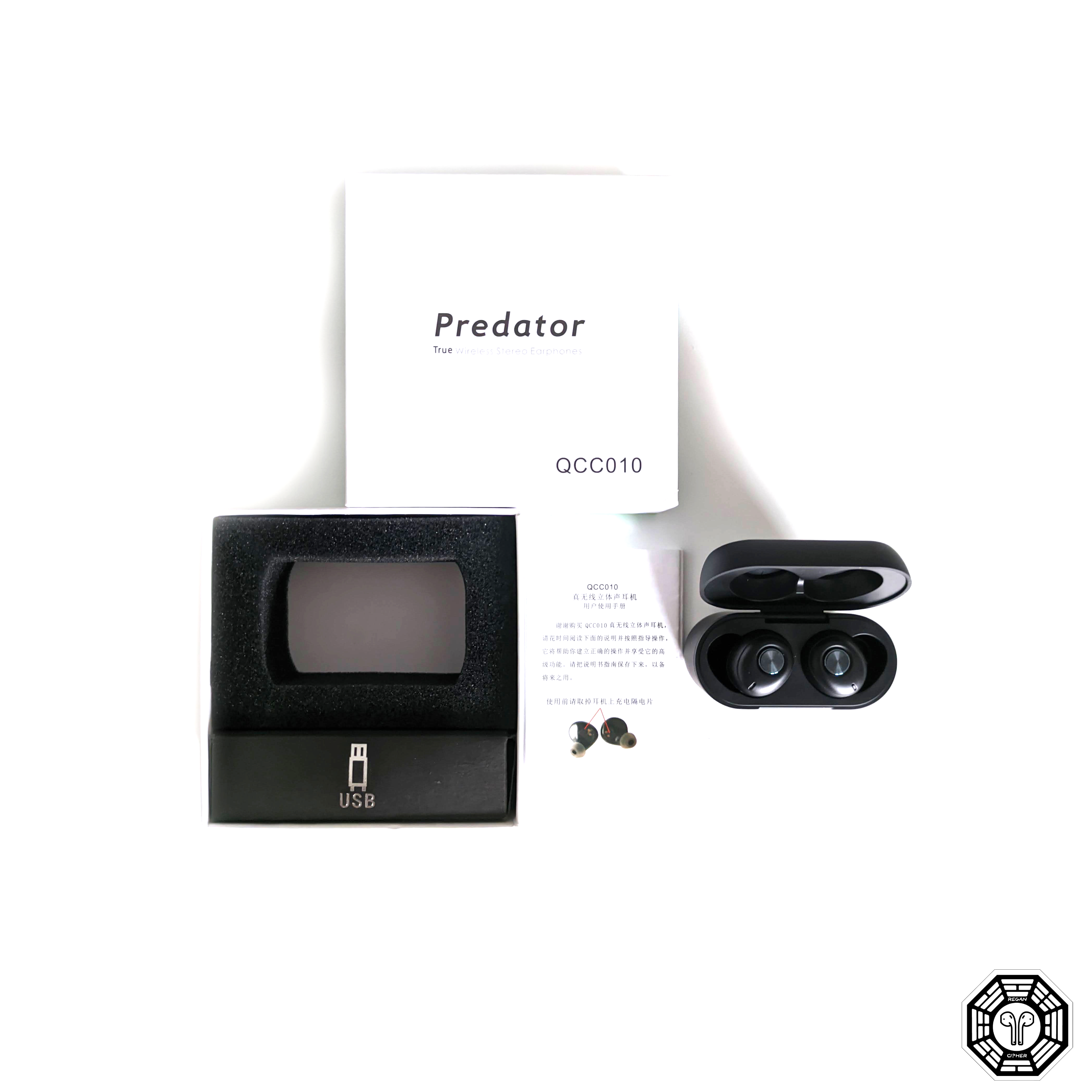 Included is a usb type C charge cable, 3 sets of short, silicone tips, charge case and manual (Chinese and English). The manual did not make a whole lot of sense to me and is absolutely tiny! 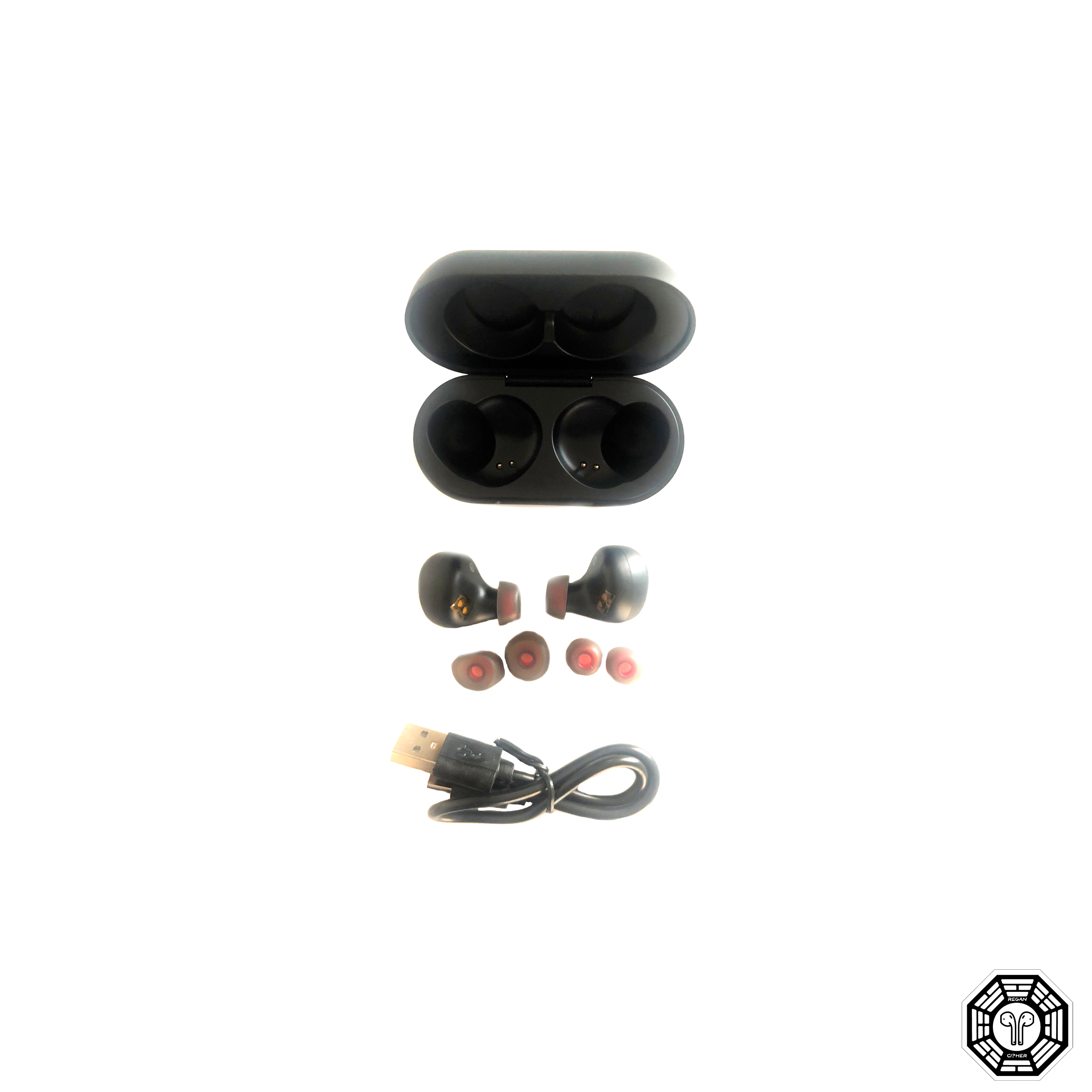 The tips are very short, and they should be - longer would be uncomfortable. You'll probably want to replace the tips - they've cut corners here, as you would expect for the price. 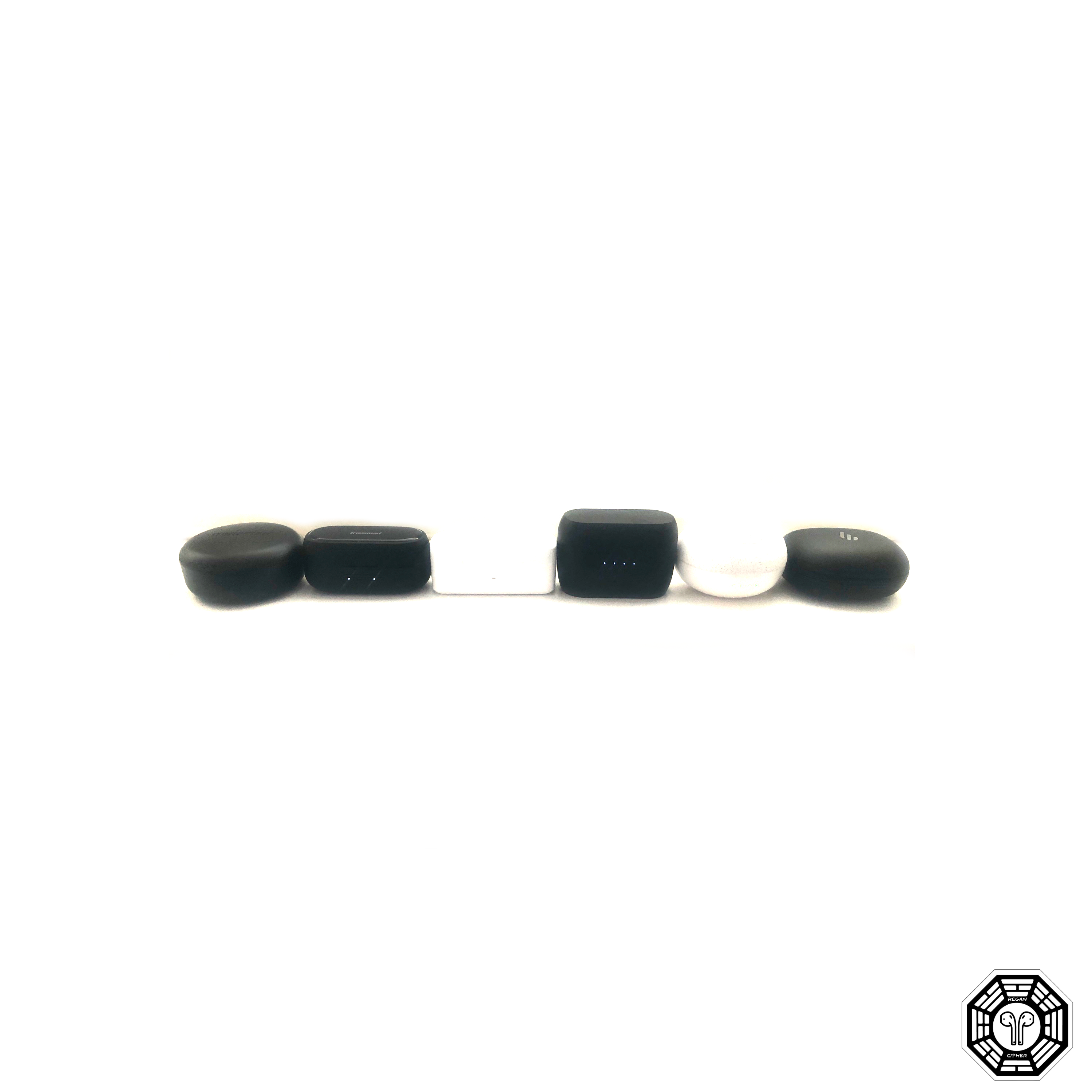 Well, as you can see we almost broke the record for the tallest case! Only the Whizzer E3 is taller, and it measures twice the height of the FIIL T1XS. 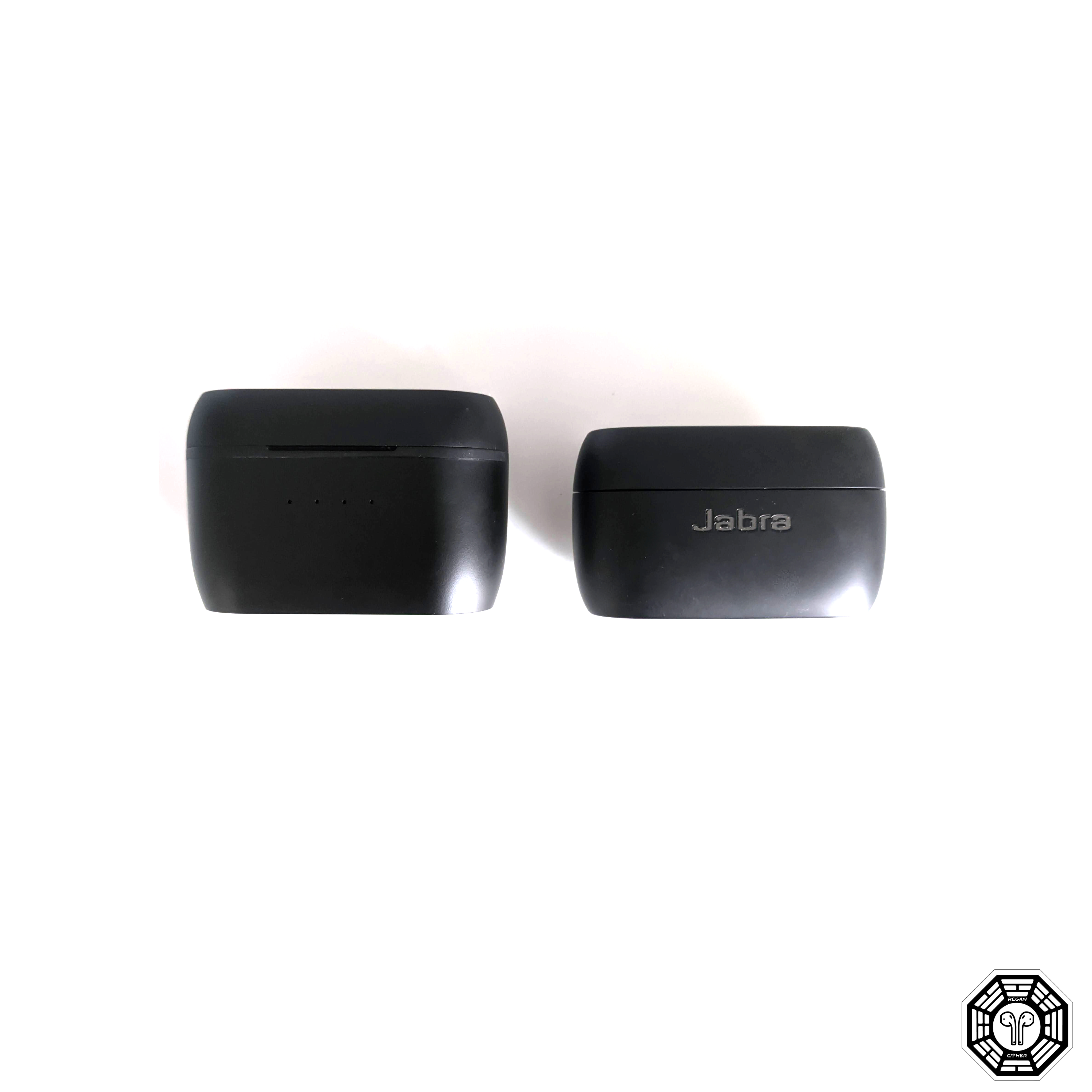 Perhaps a fairer comparison is the similarly sized Jabra Elite 75t, although the Predator is still slightly taller. 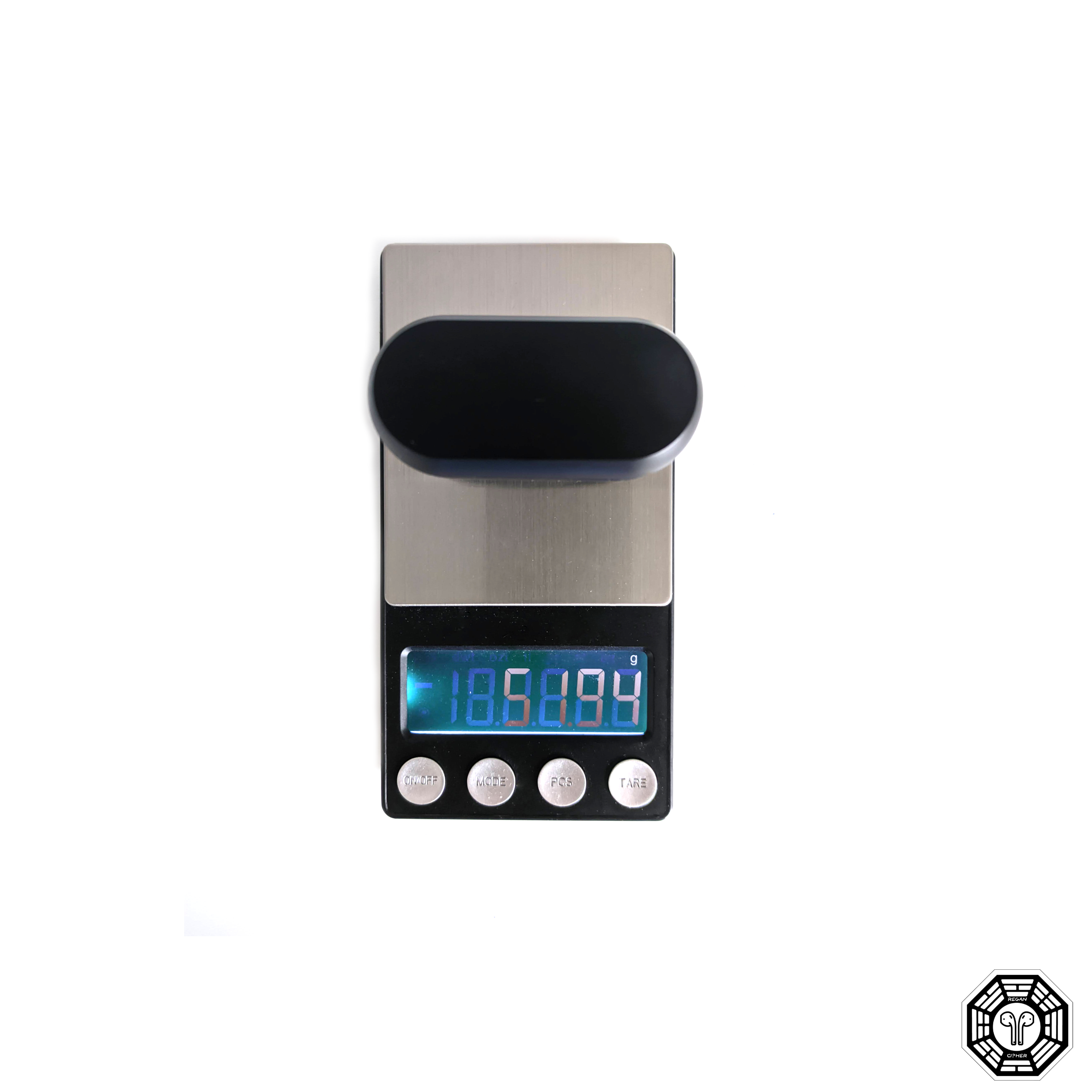 Weighing in at 52g, and measuring 63mm wide, 40mm high and 25mm depth, the case is still portable for the daily commute (unlike the Whizzer pebble) and the height is forgiven when you discover it provides a whopping 8 additional charges - a total of around 63 hours 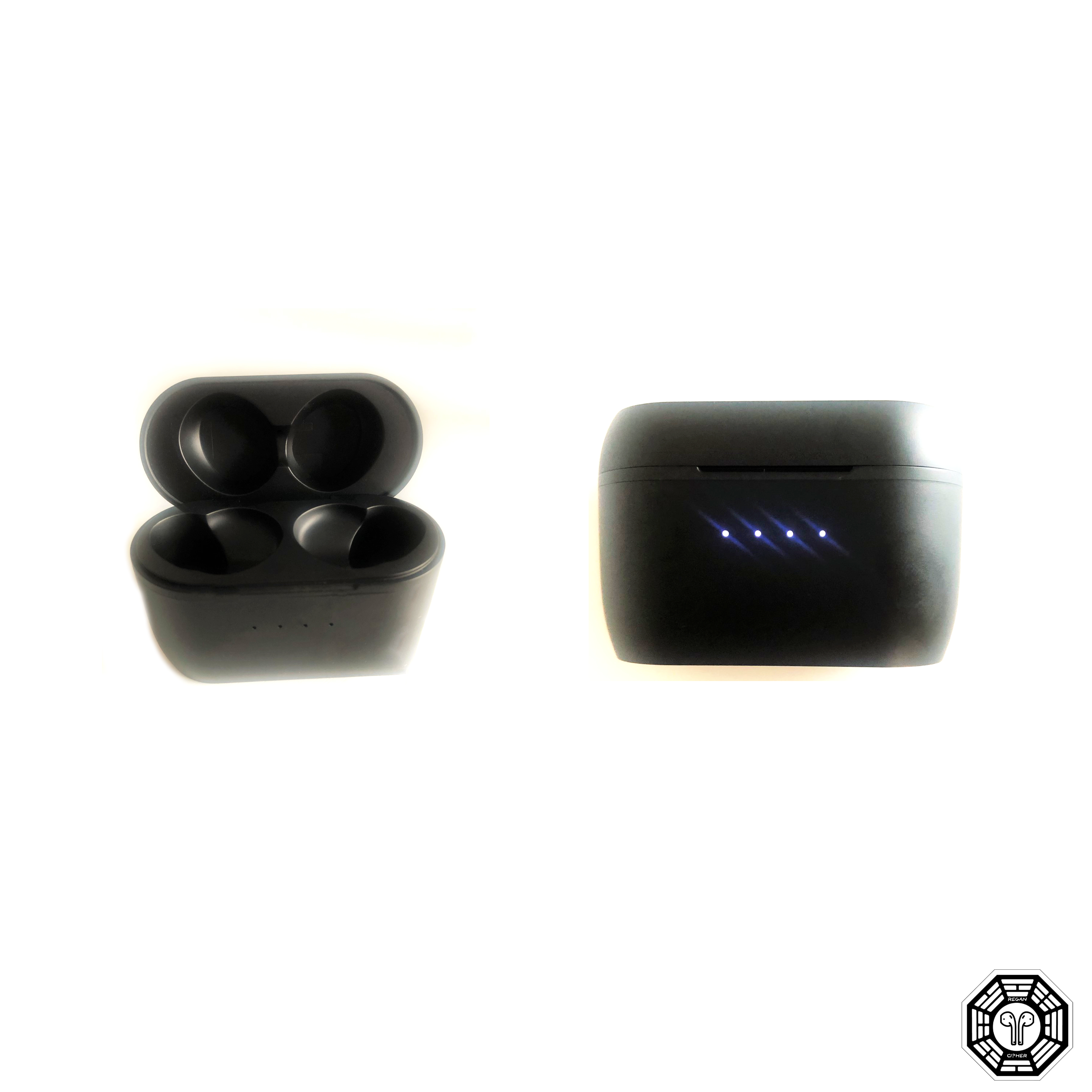 The lights on the front represent percentage rather than number of charges left, but 4 lights is always better than one. 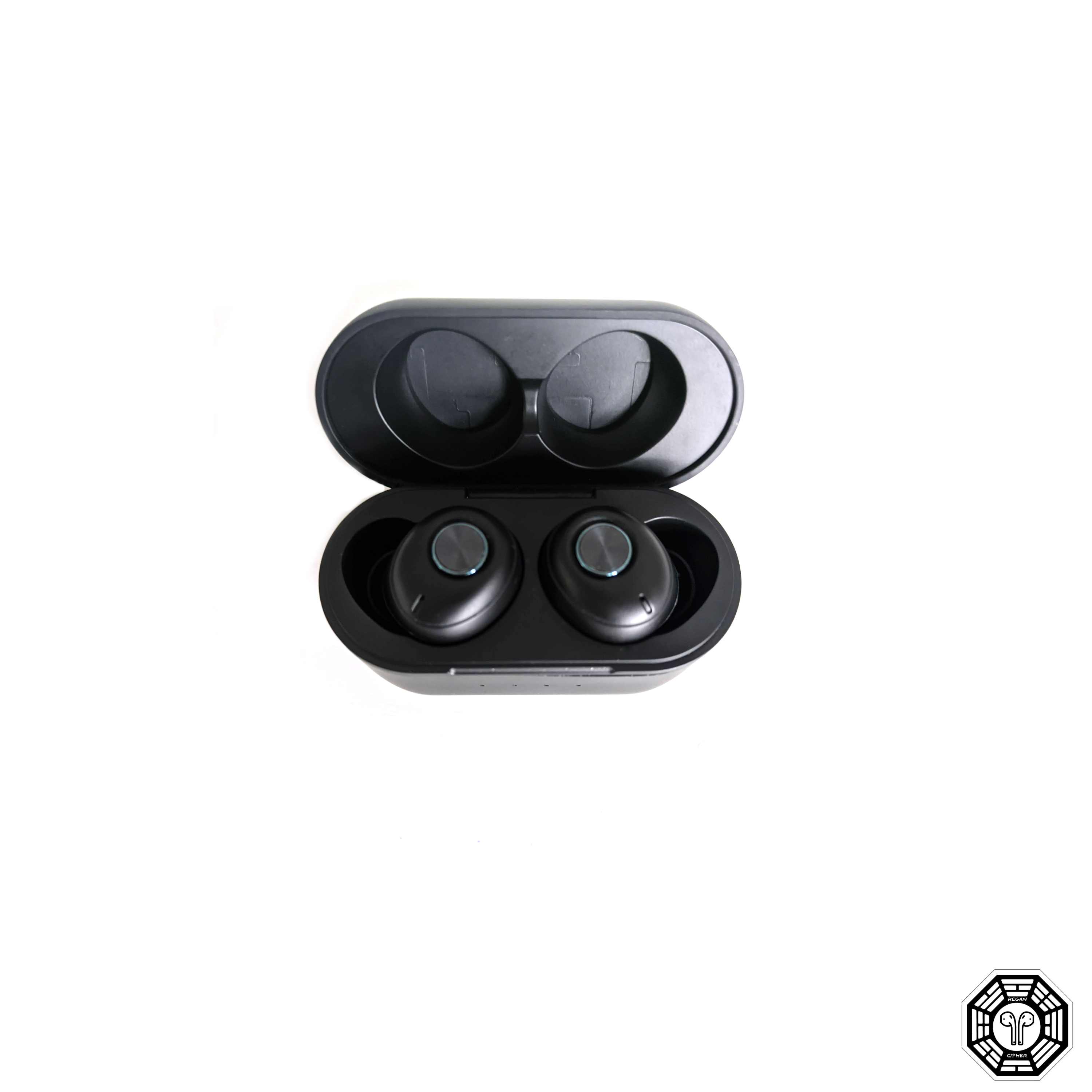 The lid is firm but could be a weak point as you would expect with the case being being bottom heavy, but the magnets are very tight. These ain't falling out in the road unless it's out of brute force trying to prize them out! 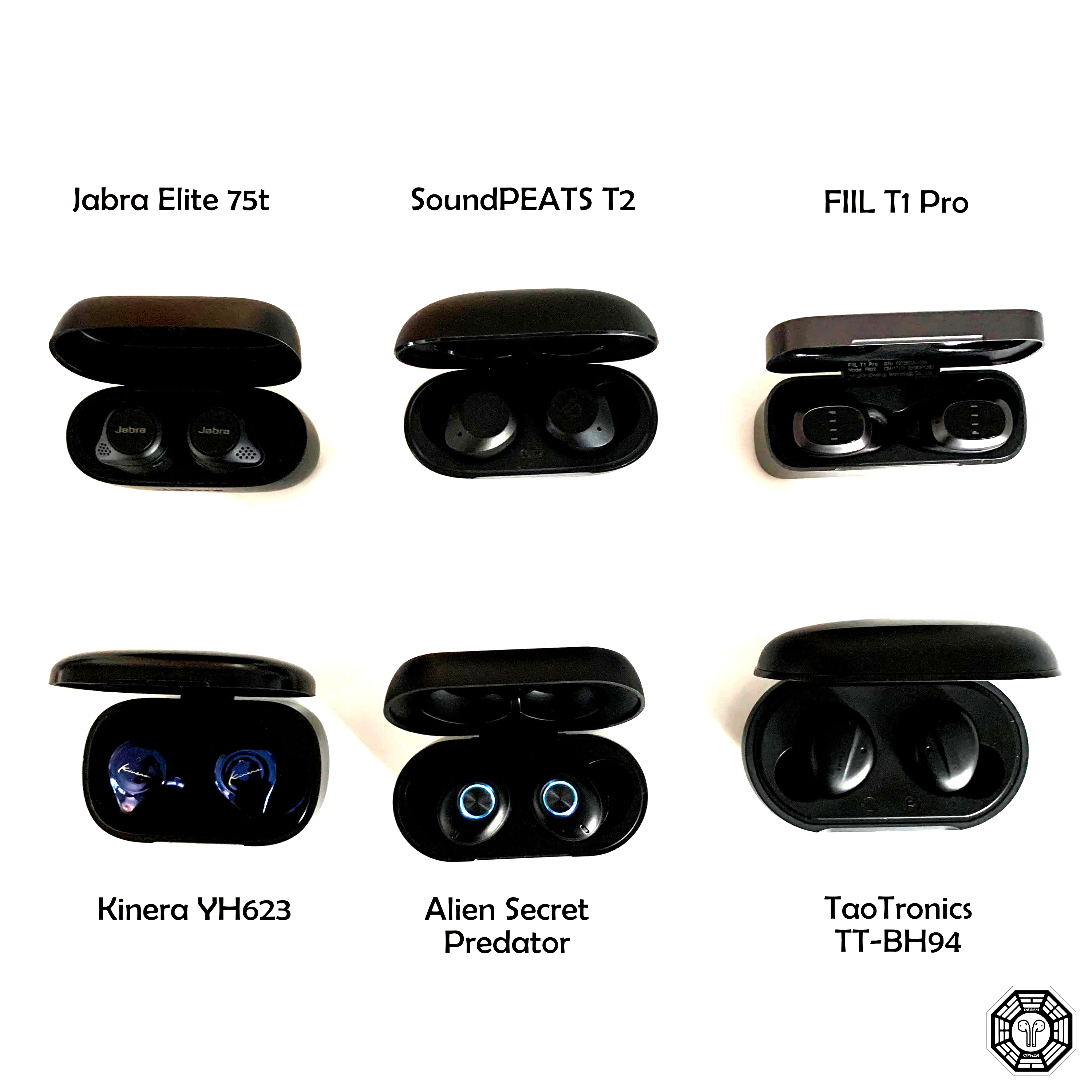 The 'rest in the top' approach is gaining traction in the TWS world! 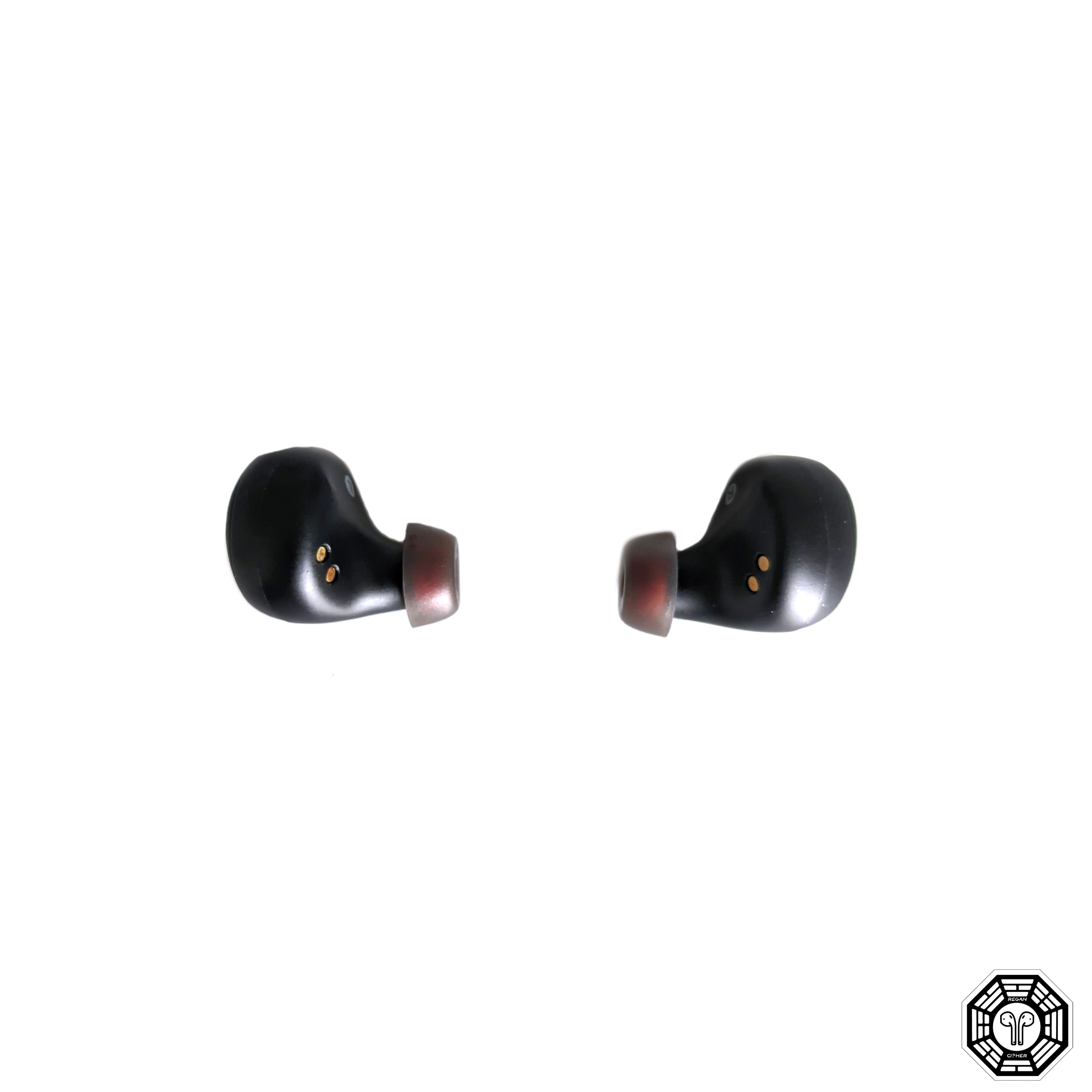 Despite being pretty generic looking - they go under several different names including Anomoibuds - they look OK, certainly inoffensive, and well worthy of their price tag. 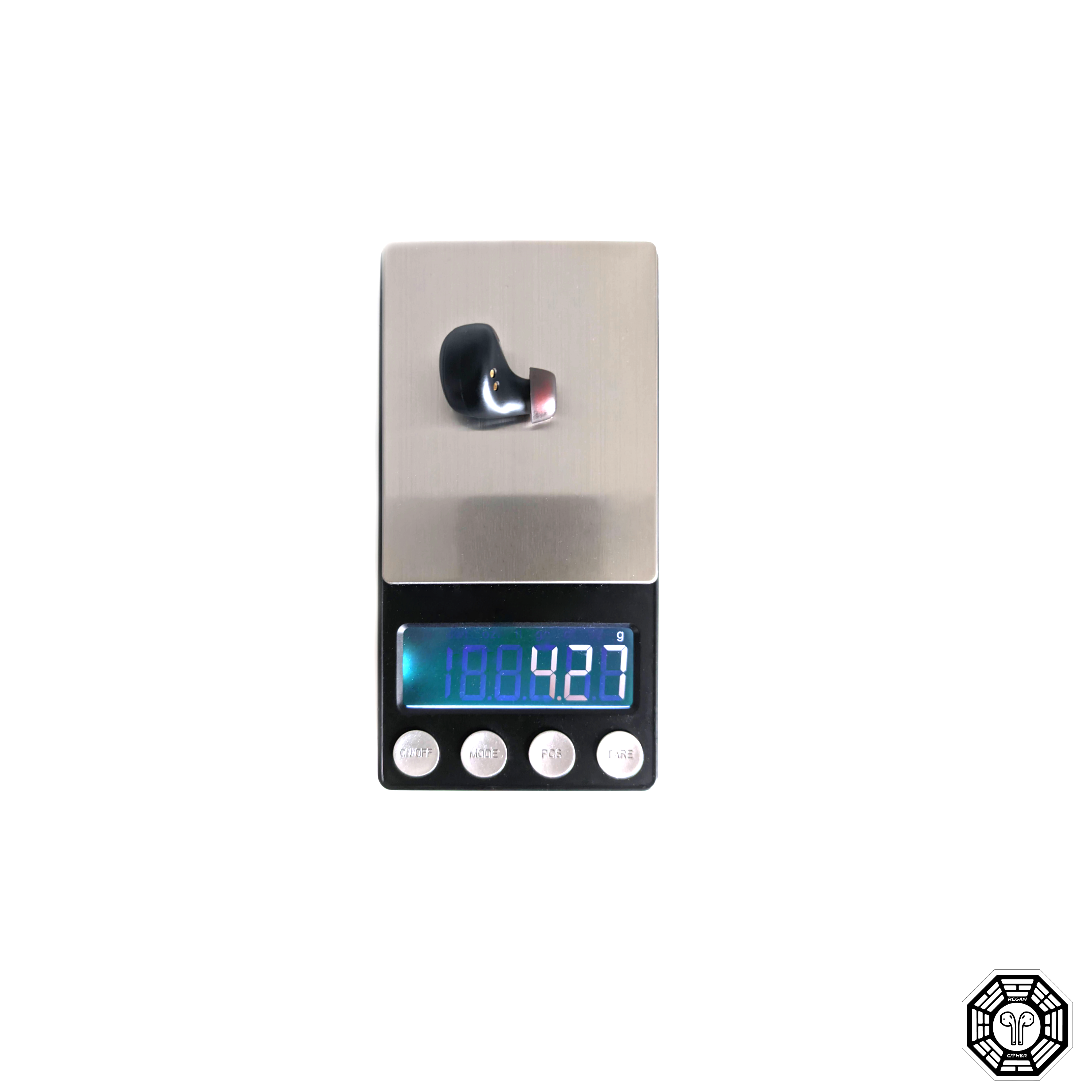 At 4.27g, they are by no means heavy. They offer an advertised IPX5 water resistance. 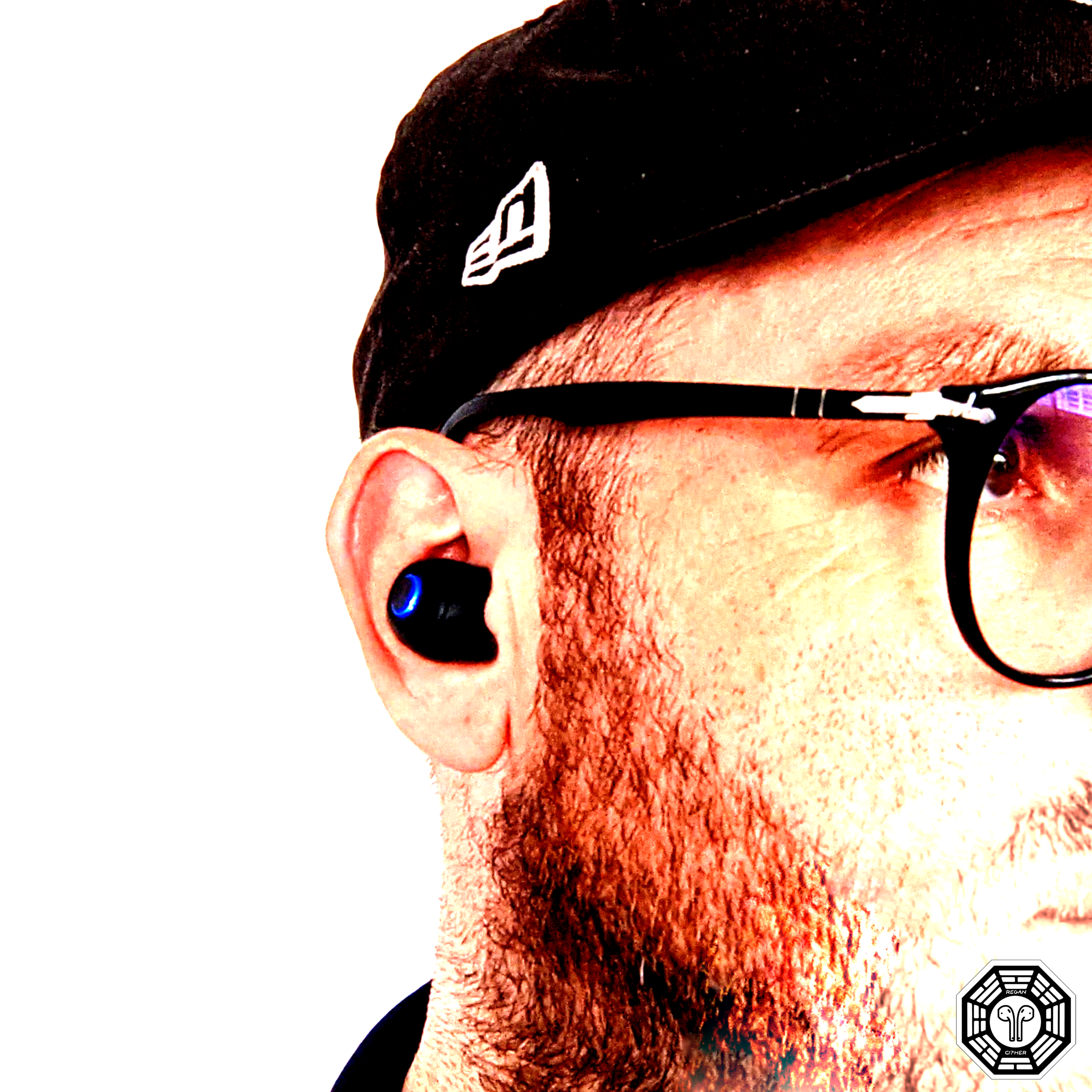 The fit is super tight. A minor adjustment can completely change the audio delivery, but fortunately once they are in, they require barely any adjustment. 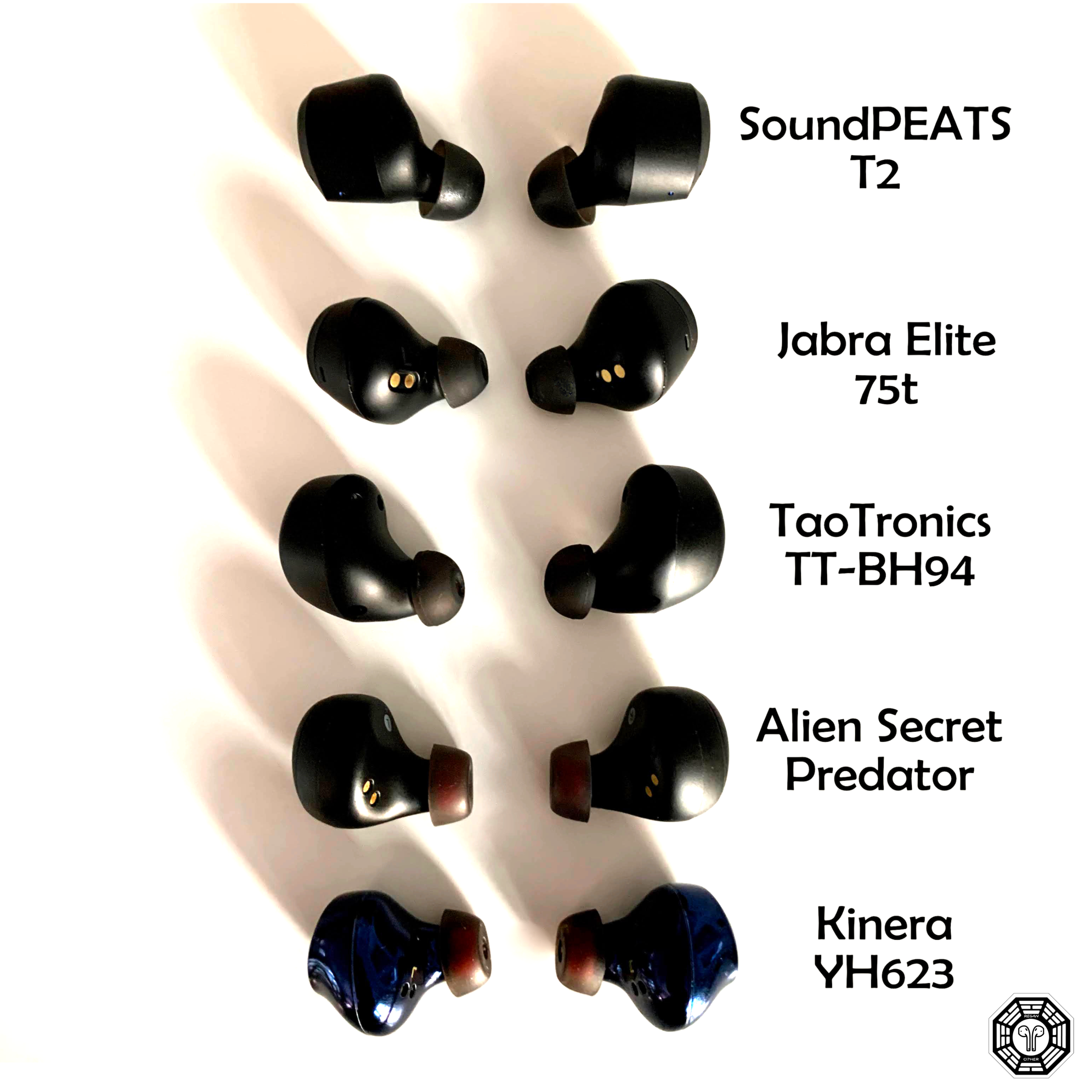 The right-angle style design pushes them deeper into your ear, and can feel a little overwhelming at times, although no different to something like the FIIL T1XS, Kinera YH623 and to a degree, the Jabra Elite 75t. There's a seal, and then there's feeling your brain rattling around, and the QCC010 are more the latter than the former, so if you are more inclined towards semi-in-ear, then you probably won't enjoy them.

I definitely recommend playing around with the tips to get the right option. When you do, you will notice a solid isolation that is as effective as some of the poorer ANC options on the market.

They kinda need wings to offer consistency. These guys just love a snug fit, no, they need a snug fit. I managed to fit an old set of wings from an old set of Soundcore Liberty Duo and they sat in perfectly. Sadly, they have to be removed to go back in the case. 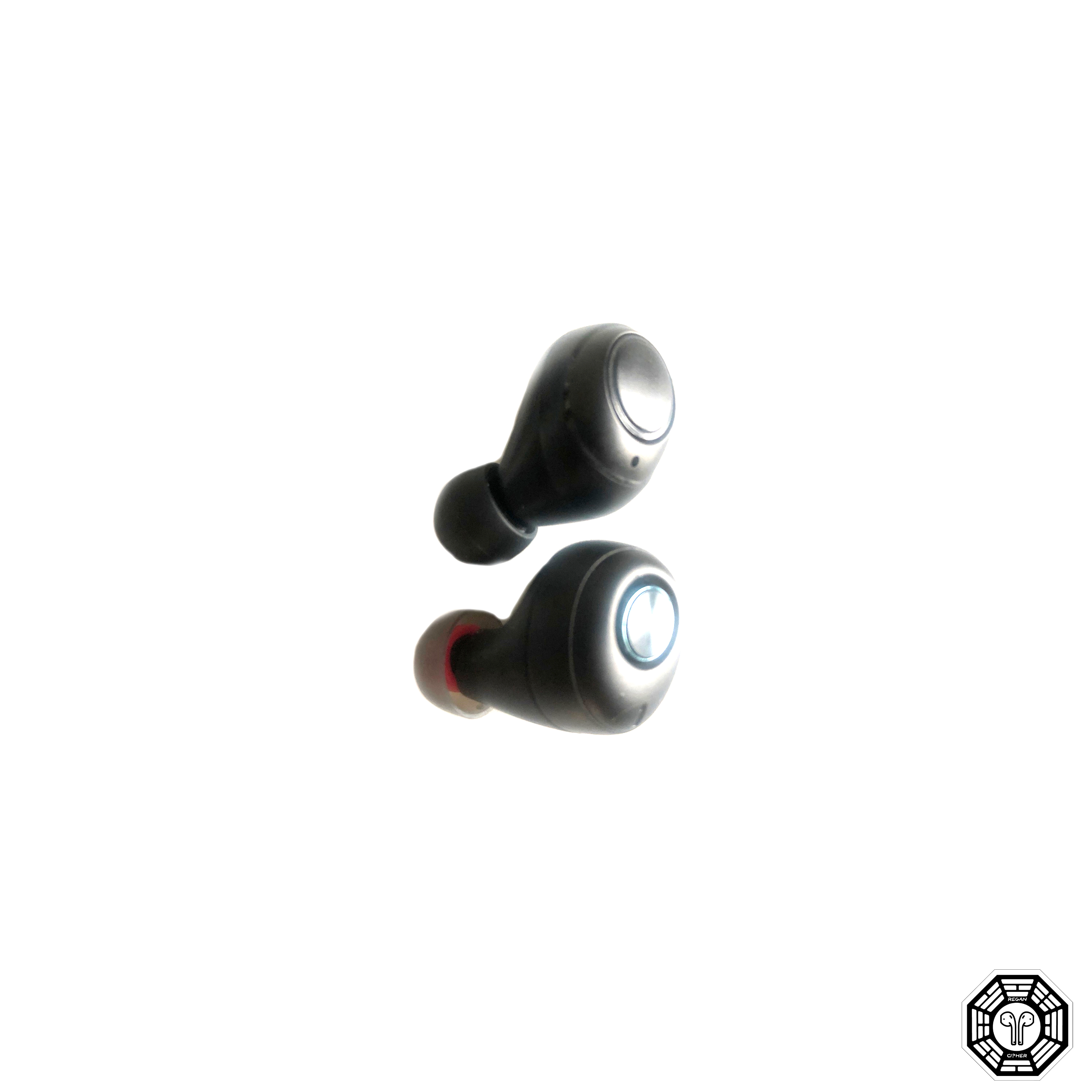 The design is similar to the Tronsmart Onyx Free with tactile, albeit smaller and more fiddly, touch control buttons. Microphone, like the Tronsmart, is on the bottom, but doesn't perform as well.

The frequency range is advertised, like the FIIL I recently reviewed, as 15Hz to 22KHz, and objective testing revealed a heavy subbass rumble reminiscent of the Tronsmart Apollo Bold that was noticeable with the mini tips. This seems to dissipate with foam tips or medium silicon ones. This was only offensive on a few tracks and at high volume - the max volume on these seems to be lower than most. The treble notches slightly short of the advertised, with a spike in the high mid frequencies, and is much less fatiguing than others around the same price point whilst delivering usually quite clear vocals, especially on female vocal tracks.

Despite the roll off, the trebles and high mids can come across harsh at times until you play around with the fit. Eventually, you can get a slightly less harsh sound that puts some room between you and the soundstage, which is a good thing because any closer and they will be tickling your hypothalamus! They would have scored higher but for the wildly inconsistent sound profile dependent on how they are angled - I expect a bit of variation but they went from tinny to bassheads with a flick of the ear.

When you get that ideal fit they are no slouch, in fact, they are really very good! At that point whatever I threw at it - from Jonas Blue to Saint Etienne to John Legend - all the tracks that usually betray massive flaws - were handled without too many problems. In fact, they handled them so well it begs the question....if Alien Secret can make a £16 set of buds sound acceptable, how come Mpow, Anker, Taotronics, Nillkin, Aukey and all the other garbage I've stuck in my ears over the last few months get it so wrong?!

Don't get me wrong - they lack the finesse that is evident when you listen to the likes of the FIIL T1 Pro straight after - but you can easily spend triple this and get nowhere near this standard.

Using aptX on windows with various FLAC files, they separated the low and high mids without unusable bleed - I've lost count of the number of times the vocals have either got lost or caused the bass guitars to become indiscernible with cheap earbuds, but no such problems here. I have an EQ setting on my sound bar called 'concert' and it's like these are set to that by default.

It's worth remembering these were less than $20. Unlike the IEM world, you rarely get a $20 headphone that gives any more than below average sound, but for the price the Alien Secret are fun bass monsters that won't give you much detail, but will give you value if you're on a strict budget, so enjoy them for what they are.

These are very much in the 'let everything through' camp. There's no noise cancelling going on in the mic 'array'. Well, there is, but cVc 8.0 is not known for its effectiveness. And by array, I mean a questionable hole at the bottom of the button and a gap somewhere for ambient sound.

That makes background noise omnipresent, but your voice does come across very clearly, even bassy, when the scene has a normal ambient noise level, so indoors, you can have a decent conversation, putting them above many sets I've reviewed of late.

Outdoors becomes the usual sham that is associated with low cost earbuds. The wind and traffic quickly overwhelm your voice. Don't expect to make calls, and you won't be disappointed.

Connectivity, Controls and Other Features - 7/10

Connectivity is OK. The usual 8-10m indoors and no real interference issues. However after disconnecting from Bluetooth Tweaker, they really didn't want to reconnect automatically. Strange, as every other set I've ever reviewed has. One thing I do like, is that holding down the buttons switches them back on or off. This saves fiddling around with the case.

The small button takes a bit of getting used to, but is better than having a touch control screwing around with your audio the moment you rest your head down. This makes them ideal for relaxing and bed listening.

AptX means latency is acceptable especially on newer Android devices. It also supports AAC and a bitrate of 293k, so whilst I couldn't get a latency measurement, it's the usual fare of around 130ms. Watching YouTube on Windows revealed the strength of the AAC configuration - latency was not obvious. Netflix was even better.

Outstanding. Comfortably 6 hours and the case offers a further 9 full charges! Wireless charging is a big plus too.

I had little expectation for my final review for September. At such a low price I was expecting MPow quality sound. Instead, the Alien Secret were more like the Spunky Beat - a very pleasant surprise.

For android users the presence of the aptX codec make these a good option. The IPX5 water resistance rating makes them suitable for workouts, but the passive isolation is so strong I probably wouldn't recommend running in them.

The sound is great for the price, but get the right fit, otherwise you will be either disappointed or overwhelmed. When you get it right, they are strong in every department. Mic quality outdoors is a no-no, so don't get these for the daily commute.

Overall, I can't believe the quality for the money. I've gone through enough rubbish earbuds this year to know a duffer - these are unequivocally not one of them.

These are the best sub $25 earbuds you will ever buy. A total bolt out of the blue!

smith
Excellent review.... I have had mine for a day now and I agree fantastic sound for the money. Better than some TWS I have that cost over 3 times as much.

RemoGaggi
These come with the absolute worst stock tips I've ever seen - beyone cheap, uncomfortable, and terrible. I tried other tips, which is an improvement, but then it won't charge in the case. I'm sorry I bought these.

whitete
Nice review. Thank you. I really wanted to like these but the BT connection has been awful. Wondering if I got a bad pair. Maybe I’ll have to buy another pair.