The Sextett is the original version of the K240, first made in 1975. It differs from the later versions in that it makes use of a ring of variously-tuned "passive radiators," which are like little driver membranes without voice coils behind them. This tricky and expensive device (also used in a few other AKG headphones of the time, most notably the K340) gives a very precise control over how the acoustic backwave returns to the listener's ear, crucial for spatial presentation and general frequency response. Later K240 lacking this ring of six passive radiators are generally considered sharply inferior to the original version.
Share:
Facebook Twitter Reddit Pinterest Tumblr WhatsApp Email Share Link 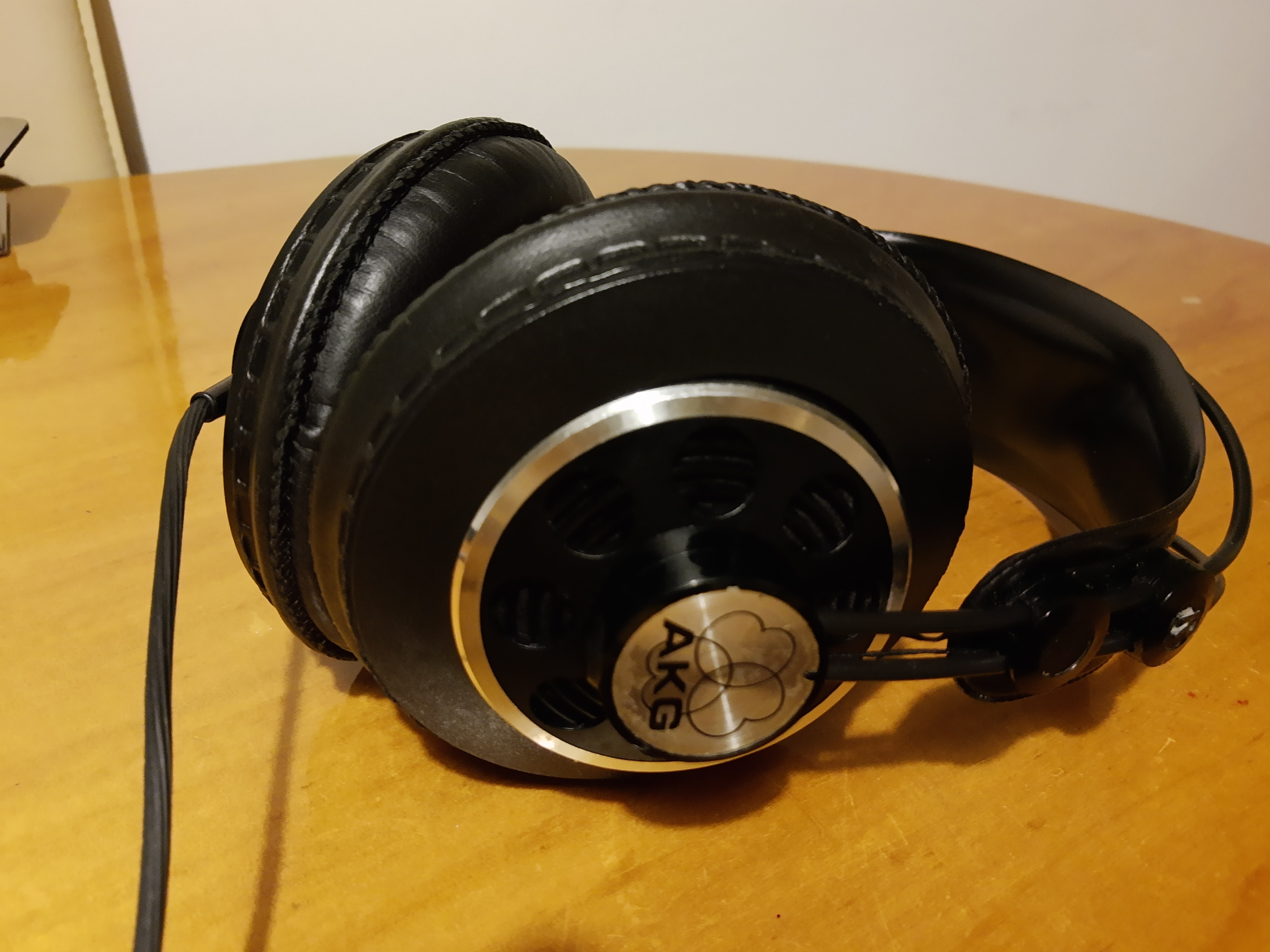 Vintage AKG from the early 80s. Classic studio phones of the time. Clear mids and great imaging are the reason these were beloved by the studios of the time. Imaging makes them surprisingly good for gaming. They are light and relatively comfortable and surprisingly easy to drive, despite high impedance. You can easily drive them with mobile phone or laptop. Probable reason for that is abysmal bass extension. Sub bass is almost not existing. Soundstage is so narrow, it is almost nonexistent. However, this results in an extremely forward presentation. It sounds like you are on the stage with instruments right next to you. Despite overly boosted lower mids, sound is enjoyable during longer listens. The sound has somewhat plasticky timbre, not sure if it is caused by the tuning or the passive radiator system. Leather cups can get hot and uncomfortable during longer use under summer conditions. Cable is non-removable, as typical for the headphones of the time.
Last edited: Jul 10, 2021
Pros: Unique soundstage and imaging, outstanding mids, lightweight and portable, inexpensive at this point in time
Cons: Requires an above average amp, elastic bands need replacement or mods as do older ear cushions
I've owned these headphones since I was a teenager.  After all these years the headphone still sounds great.  Made originally in Austria in the mid to late 70's these headphones have had several variations:  early, mid and late.  My sextet is the LP version.

Do not judge the quality of these  headphone by the sound out of a normal headphone jack, unless it is a well powered vintage receiver headphone jack.  At 600 ohms they need power.  In comparison they are more difficult to drive than my Beyerdynamic Tesla T1.  The T1 is more efficient with a similar 600 ohms.  I am currently driving these with a combo Meier Daccord and Meier Corda Classic.

Strengths:  Mids are outstanding as good as any headphone I've ever heard. Light and comfortable with updated cushions.  The cushions are still made for the updated version of the K240.  The K240 is not made in Austria anymore but the updated cushions work just fine with the vintage model. Isolation is fair as the cushions block out sound better than a Grado SR80i but not as well as closed headphones.  Imaging and soundstage are like no other as a central speaker uses six unique sound reflectors to separate sound in ways often heard with more expensive headphones. I feel these headphones are best with Rock.  Instrument and vocals are out front, with sound presentation and audio separation. Older Rock as well as modern rock sounds fantastic.  Tom Petty  "I Won't Back Down" and Muse "Supermassive Black Hole" equally resonate despite the lack of heavy bass.  The detailed sound in the mids makes up for areas that could be better.

Weaknesses:  Little Bass and lacking much in the way of transparency, these headphones are more consistent with Grado coloration which frankly from my perspective is not all bad.  This vintage phone often requires minor mods or replacement parts which are cheap. Inefficient at 600 ohms if not properly amped it is easy to think that these headphones are broken. The high end of the audio spectrum is present but definitely not emphasized.  The construction on these vintage phones are outstanding inside the speaker components but the main body is hard plastic, chrome, and rubber. I packed these Headphones away for several decades.  I tried the old AKG's on inferior amps and jacks and believing they were broke I simply packed them away.  Little did I think they still worked, let alone sound so amazing.  The good folks on the vintage thread helped me realize what I had ignored for years and with about $30 worth of minor mods I brought these old headphones back to life. The LP sextet with the white reflectors.  Given the 30 years they have been gathering dust they still sound great. This  speaks to the original construction quality that went into these Austrian made headphones. The LP version note the silver AKG on the headband. Some people prefer this version of the AKG while others prefer the EP or MP versions.  Since I've never heard the other versions I hesitate to offer an opinion.  I would definitely recommend the AKG sextet--Grado'd AKG thread.  This is the main AKG sextet thread,  a vary serious detailed thread that goes into levels of detail I only humbly scratch at. Reactions: ArChaos, rocksteady65 and nick n
Pros: Detail, placement, mids, musicality
Cons: Treble/bass extension, small soundstage
I purchased these to serve as a dual-purpose music listening and audio production headphone. I am driving them out of my Little Dot MKII and Beresford TC-7510. They've also been recabled by Fitz with his black clover cable.

Highs: The highs are my least favorite thing. They don't extend that far and lack presence, although they are by no means bad. They're reasonable detailed.

Mids: Beauitiful! They're beautiful and rich and luscious. Female vocals especially sound good. They also seem to exist in their own space, seperated from the rest of the music. It's lovely.

Lows: I have the bass heavy LP version and the lows are kinda average. The extension is alright but they're a bit loose. They don't have much punch or tightness.

Soundstage: The soundstage itself is pretty small but the placement and seperation makes up for it. Every instrument exists within it's own space and as a result they feel airy and spacious, despite the small soundstage. I can pinpoint each instrument in the mix. When something comes in it seems to be exactly where it should be. This is one of the main strengths of the Sextett.

Detail: The detail is also fantastic. It's almost Ety like. I'm picking up things I've never heard before, like the final decay of the reverb on a snare, or an intake of breath. This makes them pretty damn good for audio production.

Compared to my HF2 they're a few seats back and don't have that same crunchy Grado involving energy, but nothing does. What they do have is a very good sense of musicality. They're involving. If I want to I can go delving into the music, focusing on one individual instrument, but I can also sit back and let it present itself around me. Despite their technical faults (lack of treble and bass extension, small soundstage) they do enough things RIGHT to be very enjoyable.
Reactions: rocksteady65

Zumper
look i bought a set of AKG K 240 sextett with about 4 dollars. Can anyone explain me why are so good ? Beside the really really good sound. Thank you.
Read more…