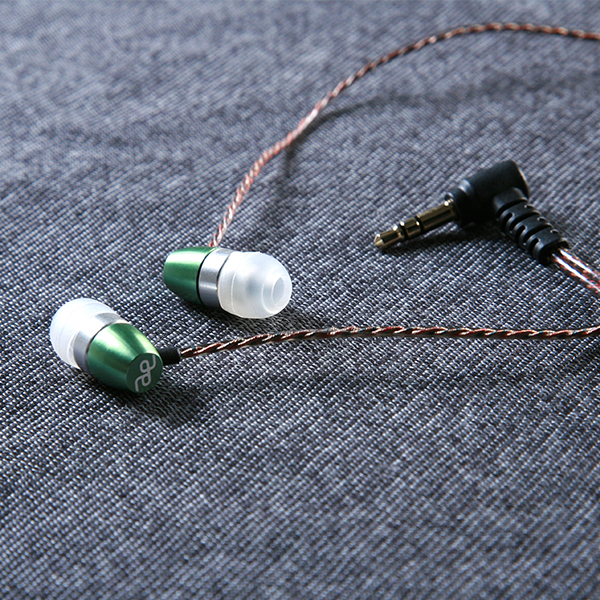 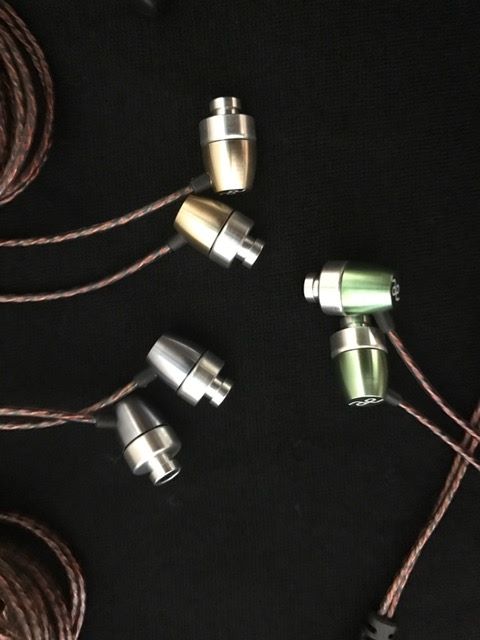 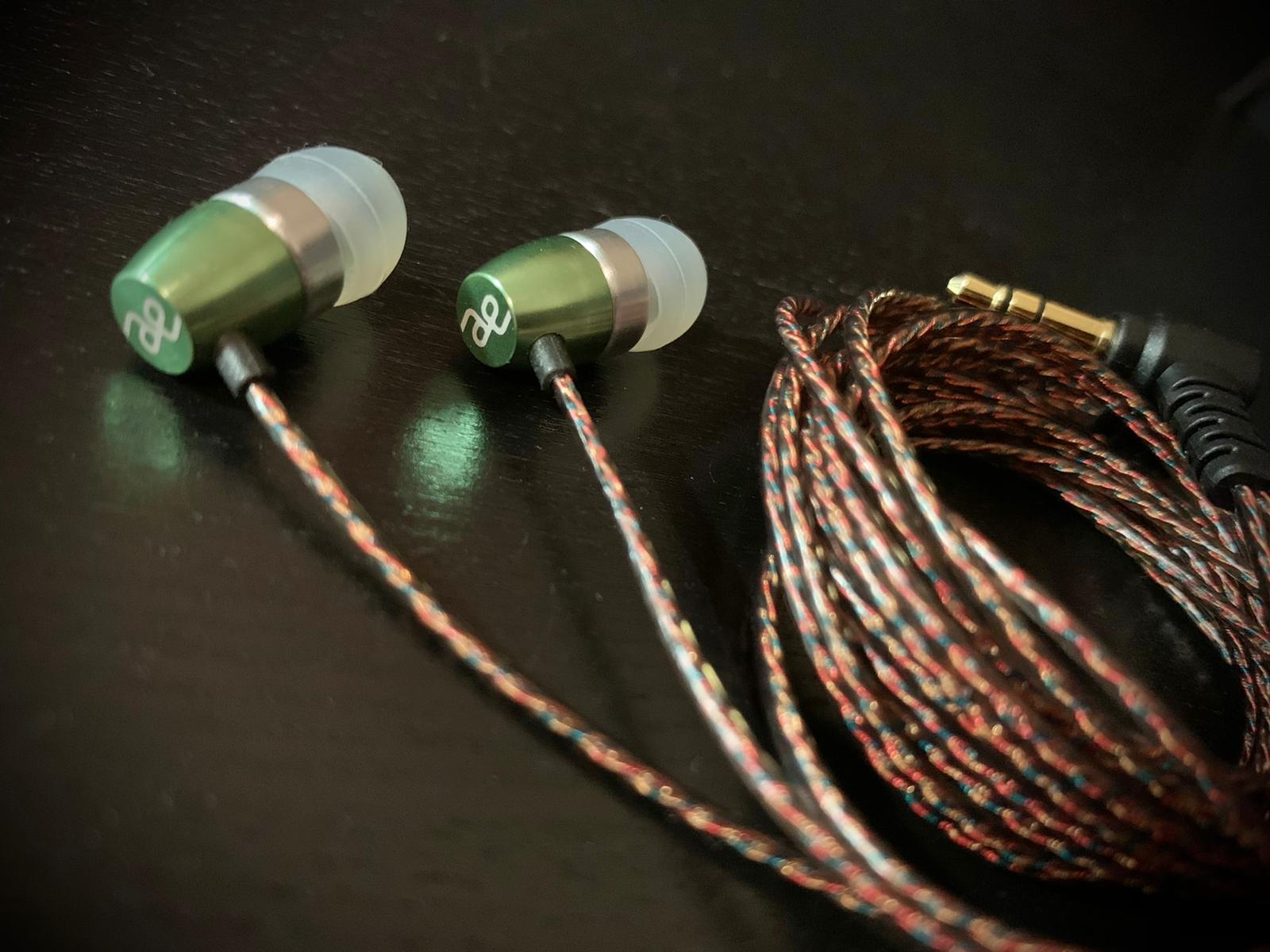 I would like to thank Atsushi Narita from Acoustic Effect for providing this review unit.

The Acoustic Effect website can be found here: https://www.ac-ef.jp/

Acoustic Effect is a boutique Japanese earphone company, located in Tokyo. Their gear is entirely made in Japan, unlike some other companies that do assemble their gear in China. The Acoustic Effect TRY-01 is their entry level IEM, and I am already quite impressed with what they can do with just a single BA in this set. I really hope to try their higher end gear if I get to visit Japan (once this covid climate is settled).

The Acoustic Effect TRY-01 is the quintessential niche Japan-FI IEM. Minimalistic with one driver only, but still well tuned, smooth and relaxing, with no sibilance present. Timbre, technicalities and tonality are good for a single BA set, though this set is subbass lite, so it may not be allrounded for bass forward music genres or bassheads. The Acoustic Effect TRY-01 also retains the legacy of some budget/midfi Japan-FI IEMs in having non detachable cables, but for neutralheads and midlovers, this set is gonna be a zen like listen.

My set was a review sample, so it came with the following (in addition to the IEM): 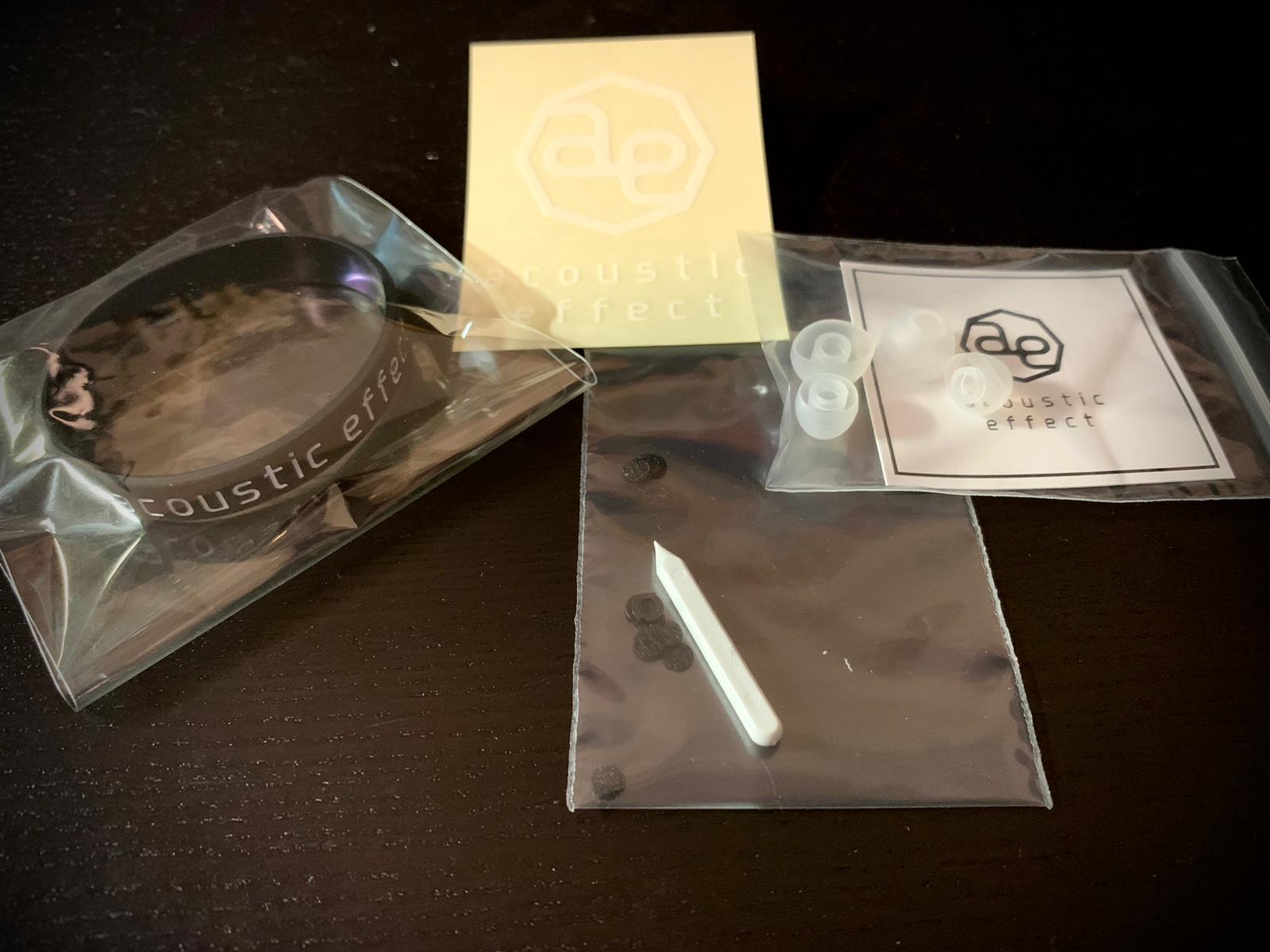 The actual retail packaging comes with a hard case (with screws to close the box) as per this product page photo of their actual provided accessories: 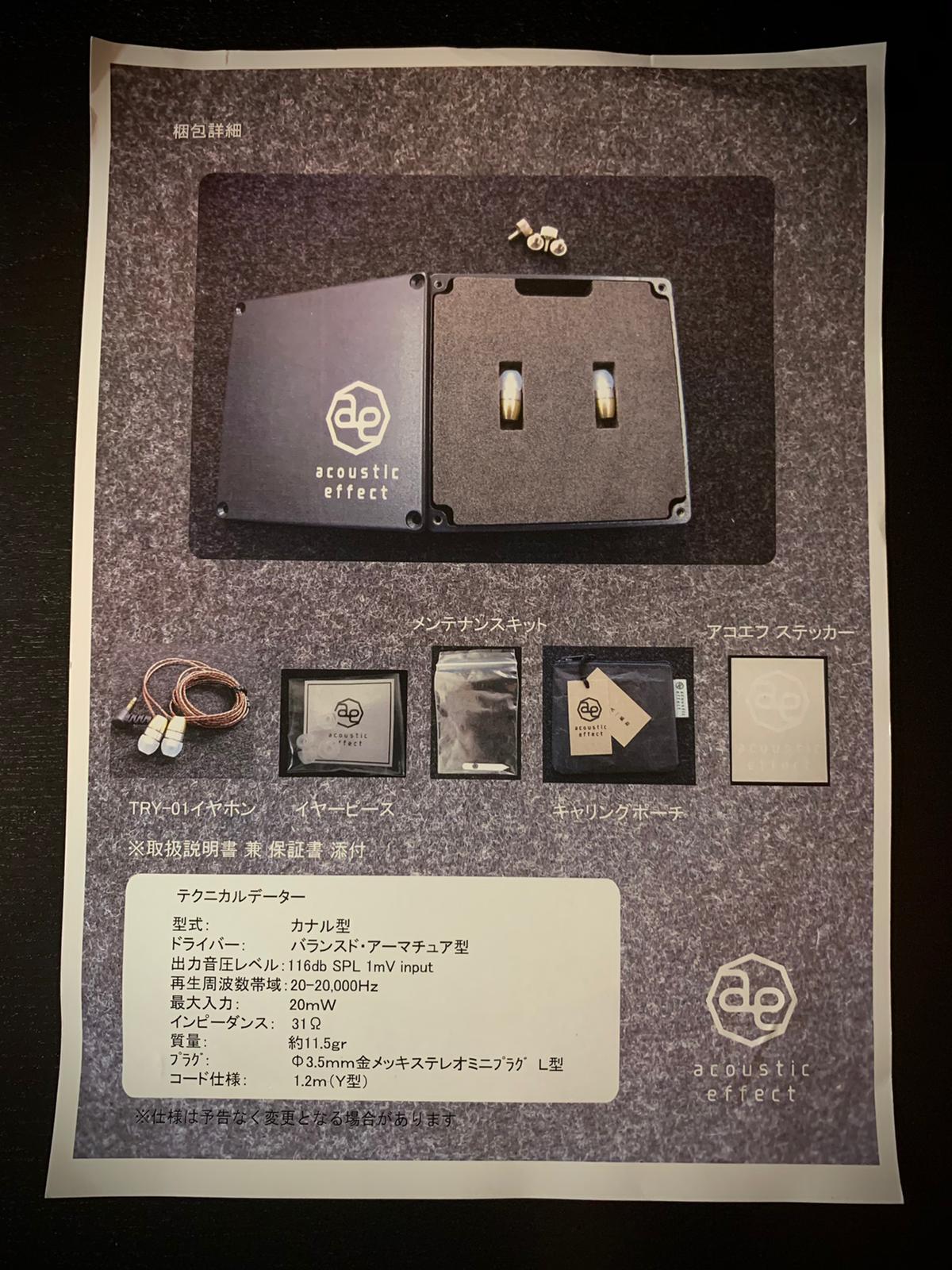 The Acoustic Effect TRY-01 comes in a classic bullet shaped design, it is well built, light and comfortable. I have used it for hours with no issues.

Unfortunately, this set has no detachable cables, which may be a dealbreaker for some at this price point. TBH, I’m in the camp that got played out in the past by a few non detachable IEMs dying at the cable, but I have spoken to a Japanese audiophile previously, and interestingly, he says a lot of budget/midfi Japan-FI IEMs come with non detachable cables, even recent releases. And he says most of the Japanese audiophiles don’t mind this quirk!

Nevertheless, the cables on the Acoustic Effect TRY-01 are pretty well braided, and they came with strain reliefs at the housing insertion (unlike the Final Audio E3000). The cable also has slight microphonics, but this can be reduced by using a shirt clip or wearing the IEM over the ears instead of cable down.

Interestingly, there is no left and right marking on the IEM, in keeping with its minimalistic roots. There’s just a small dot on the cable housing insert to delineate that it is the left side. It became second nature to me after a few moments, to know which side went to which ear. 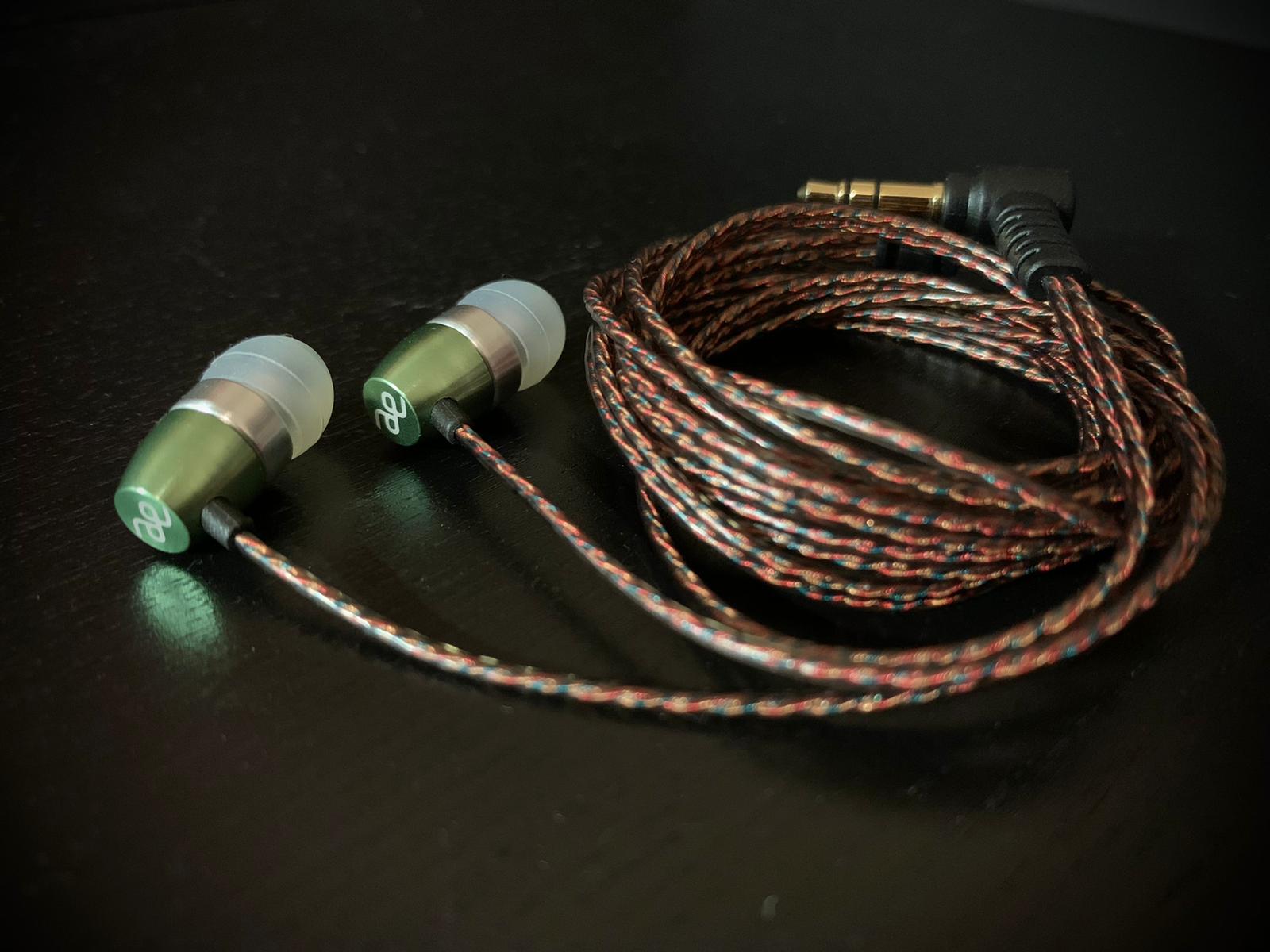 Isolation is about average, though it is actually one of the better ones for a bullet shaped design as it isn’t vented.

As the Acoustic Effect TRY-01 is a bit bass lite, I preferred pairing it with warmer sources to give some bass heft.

The Acoustic Effect TRY-01 is rather neutralish, with a subbass roll off as per most single BA types.

The Acoustic Effect TRY-01 has good imaging, instrument separation, clarity and details, but it may not beat some multi driver types at this price point in technical ability, which is an expected limitation of a single driver setup. Soundstage is deep rather than wide (width is about average), but for a 1 BA set, I was quite surprised that the driver capably kept up with complex instrumentation and fast passages of music, without feeling congested.

In view of the lack of subbass, the Acoustic Effect TYR-01 is not that all rounded, it won’t do well with bass forward music or for bassheads, but for some music genres such as jazz, classical, vocals, acoustics, it does very well due to the smooth organic tonality and natural timbre. So one can consider this a niche IEM that will suit vocal lovers, midlovers, neutralheads and the above mentioned genres, and for these areas, the Acoustic Effect TRY-01 really shines brightly.


Bass:
The Acoustic Effect TRY-01 is more midbass than subbass focused. In fact, the subbass rolls off at around 30ish Hz and I found the subbass missing in some of my basshead songs. The midbass is neutral in quantity, and bassheads or those listening to bass heavy music will definitely not be happy with the subbass amounts. The subbass does increase in quantity with amping, and perhaps one can also try tiprolling away from the stock tips to see if you can get a better seal and hence subbass amounts.

Like a typical BA bass, the bass on the Acoustic Effect TYR-01 is fast and I found it very textured. Neutral bass lovers will love the bass quantity that has no midbass bleed, this set goes for a quality bass over quantity.


Mids:
Mids on the Acoustic Effect TRY-01 continues on from the neutral midbass and there is a very good balance between the lower and upper mids. There is minimal harshness at the upper mids regions that is commonly seen in CHIFI tuning. The mids are quite natural and transparent with a fair bit of microdetailing noted. It may not beat some multi BA/hybrids in this aspect, but does a respectable job for a 1 BA setup, and I liked that the Acoustic Effect TYR-01 manages to get the detail and clarity in without “cheating” by boosting the upper frequencies, an aforementioned common habit seen in budget CHIFI. Another good point is that the Acoustic Effect TRY-01 manages to balance a fine line between slightly forward vocals without being shouty.


Treble:
Treble on the Acoustic Effect TYR-01 is moderately extended and airy, but without harshness or sibilance. Cymbals and highhats sound quite natural and not splashy. I’m treble sensitive and really appreciated the neutral treble here, I could use this set for hours with no fatigue. While some multi driver types may get better microdetailing in, the treble of the Acoustic Effect TYR-01 is natural and not overbaked.

The Westone UM1 is a 1 BA set that is tuned warm neutralish (but with a treble roll off). The Westone UM1 comes in a conventional bean shaped design, that is worn over ears instead of cable down like the Acoustic Effect TRY-01. The Westone UM1 has better isolation.

The Westone UM1 has much worse details, imaging, instrument separation and clarity and has a more compressed soundstage. The Westone UM1 has worse timbre. It also has a more marked treble roll off than the Acoustic Effect TYR-01. Both sets have a subbass roll off as per most 1BA types, but the Westone UM1’s bass has a slight midbass bleed and is not as tight/textured/speedy.

Accessories in the DT200 are one of the best at its price point, it comes with a myriad of foam tips and silicone tips, a very nice cable and brush, and a pelican like hard case (that is purportedly waterproof too). The isolation is also better on the Audiosense DT200 due to the hard and well made resin shell, it feels and looks like semi customs.

The Acoustic Effect TRY-01 is the quintessential niche Japan-FI IEM. Minimalistic with one driver only, but still well tuned, smooth and relaxing, with no sibilance present. Timbre, technicalities and tonality are good for a single BA set and music never sounded congested.

Some negatives are that the Acoustic Effect TRY-01 retains the legacy of some budget/midfi Japan-FI IEMs in having non detachable cables, which may be a deal breaker for some at this price point. This set is also subbass lite, so it may not be allrounded for bass forward music genres, and bassheads best give this set a miss.

Nevertheless, for neutralheads, this set is gonna be a zen like listen. It shines for music genres such as jazz, classical, vocals and acoustics, due to the organic tonality and timbre. So one can consider this a niche IEM that will suit vocal lovers, midlovers, neutralheads and the above mentioned genres, and for these areas, the Acoustic Effect TRY-01 really shines brightly.
Reactions: Redcarmoose and RikudouGoku
Read more…