Today we're checking out another Accutone product, this time of the Pisces Band on-ear headphones.

Accutone's Pisces lineup is pretty extensive consisting of three in-ear models and two on-ear headphones. With their modern and interesting designs, I can see why they've expanded the lineup to the extent they have. The Pisces Band is an older model at this point in it's lifespan, with reviews dating all the way back to 2012. Even so they still look modern and feel like a quality product.

How do they sound? Let's find out.

The Pisces Band was provided by Accutone on a complimentary basis for the purposes of this review. There is no financial incentive for writing this, and all thoughts and opinions within are my own. They do not represent Accutone or any other entity.

At the time of this review the Pisces Band retailed for 99 USD. You can order yours here: https://www.audio.accutone.com/pisces-band


I'm a 30 year old professional working for what is currently the largest luxury hotel chain on the planet. I have a background in Psychology which probably explains my somewhat dry writing style. My entry into the world of portable audio was due primarily to a lack of space for a full-sized stereo system during my university years, and truly began with the venerable JVC HA-FXT90. After reading pretty much the entirety of IjokerI's multi-earphone review thread, reviews from other established reviewers, and thus being greatly inspired, I took a chance and started writing my own.

Fast forward a couple years and I'm thankful to have had the opportunity to write about products for wonderful companies like RHA, Accutone, ADVANCED, NarMoo, Mixcder, Brainwavz, Meze and many more. I don't do it for money or free stuff, but because this is my hobby and I enjoy it. If my reviews can help guide someone to a product that makes them happy, I'll consider that a job well done and payment enough.

Gear used for testing was a 5th Generation iPod Touch, Shanling M1, HTC One M8, LG G5, Topping NX1 portable amplifier paired with an XDuoo X3 (Rockbox), and my aging Asus G73 gaming laptop paired with a Creative SoundBlaster Recon3D usb amp. I listen primarily to various EDM sub-genres (liquid drum and bass, breakbeat, drumstep, etc.), hip hop, and classic rock. While I enjoy a variety of signatures I generally lean towards slightly warm with elevated treble and sub-bass, an even mid-range response, and reduced mid-bass, though lately I've been enjoying more mellow and relaxed products with a bass tilt. My favorite in-ears, the Echobox Finder X1 with grey filters installed and the Fischer Audio Dubliz Enhanced are good examples of my preferred signatures. 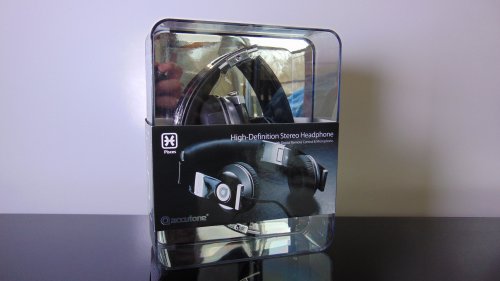 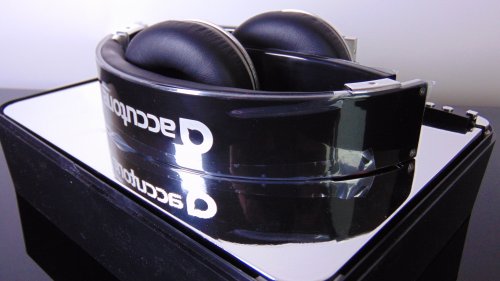 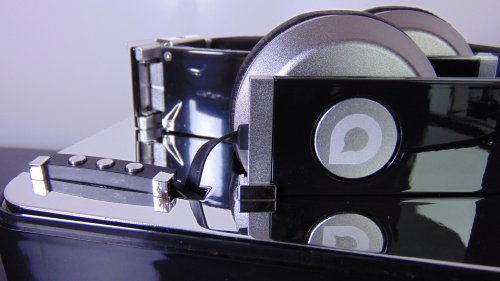 The Pisces Band continues the Accutone tradition of very attractive and appealing packaging. The Band is presented in a large jewel case wrapped in a cardboard strip. The front of the strip shows off the headphones and some basic features while the left outlines their exhaustive compatibility with Apple products. The right side outlines the Pisces Band was tuned for ultra-bass (Class Bin Accutone-speak). The rear contains trademark information and that the Pisces Band was designed in Britain.

Remove the cardboard strip and the Pisces Band is on full display. It looks glorious. It sits fully folded on top of a reflective surface showing off the aluminum ear cups and simplistic but detailed design. Removing the clear plastic cover you find that the reflective surface holding the Band can be removed. Underneath is an instruction manual and a compact black and orange, soft leatherette protective case. It's too large to fit in all but the largest pockets, but would find a comfortable home in a knapsack or large purse.

Overall it's a very nice unboxing experiencing. While you only get one accessory, that being a protective carrying case, it's a nice one. It even has two interior pockets to carry a spare set of pads should you have them. 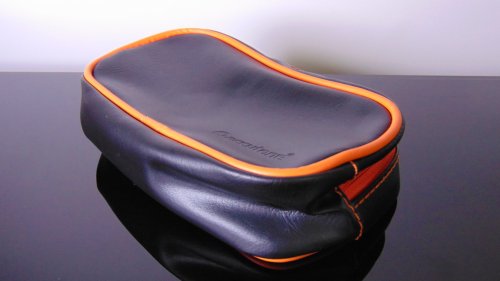 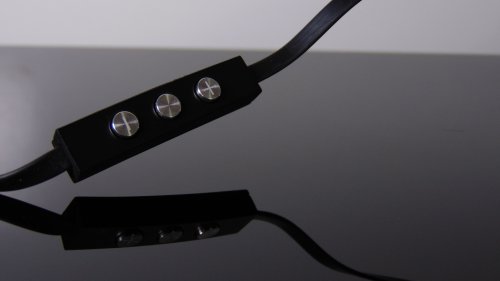 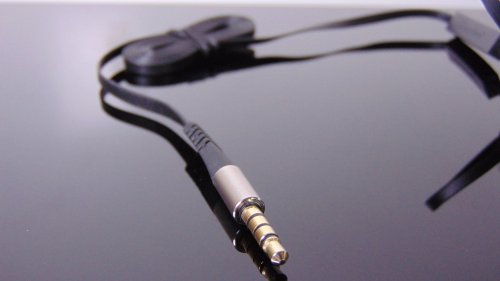 Like it's little brother, the Pisces, the Pisces Band is very well built. While there is an abundant use of high quality, scratch resistant glossy plastic in the design of this headphone, Accutone used aluminum mostly where it matters; the ear cups and pivots, hinges, and base support for the headband. The headband is fully plastic though which is something I will worry about during cold, Canadian winters. In the past, similarly built headbands have gotten brittle in cold weather and snapped unexpectedly as a result.

Another aspect of the build of this headphone that I really appreciate is the use of hex screws to hold them together. Not only does it hold a certain appeal visually, but it allows for user repairs if you can get a hold of spare parts should anything break. Modders will also be able to disassemble them with ease to customize it to their needs.

The cable is also quite nice being the same as that used on the Pisces in-ear. In that application it was a touch on the heavy side, particularly the in-line control module, but it feels right at home on the more substantial Pisces Band. Since you don't have to worry about cable noise or weight, you get to fully enjoy the benefits of this cable; great anti-tangling qualities and low memory.

The ear pads are removable via a plastic clip, not unlike that used on the thinksound On2. They are glued to the clip though, so you've have to peel them apart carefully if you want to swap out the stock pads for something else. The headband is removable as well, a pretty unique feature that I personally have not come across on any other headphone to date. If I'm feeling enthusiastic at some point, I might try to build a custom metal headband to replace the stock one since the Pisces Band is so easy to work on.

Comfort is quite good for an on-ear. Out of the box I found the Pisces Band's clamping force a touch overbearing, but in time the pads have softened and really eased up. It is strong enough to hold the Band in place with moderately quick head movements, and when you lean your head forward and back, but not so strong as to cause discomfort. That's really all I can ask for with a headphone of this design. The headband padding is also quite effective. It's plush with a decent thickness to it.

Isolation I found pretty average. When walking around outside I had to up the volume a bit to compensate for external noise bleeding in. Sitting at my computer I could still hear videos playing in the background through my laptop speakers at my normal listening volume. It was simply muted and muffled.

Overall I find the Pisces Band to be wonderfully built and pretty comfortable. The weight added by the use of aluminum really adds to the feeling of quality and durability, but doesn't lead to discomfort on your head. Isolation is pretty average. 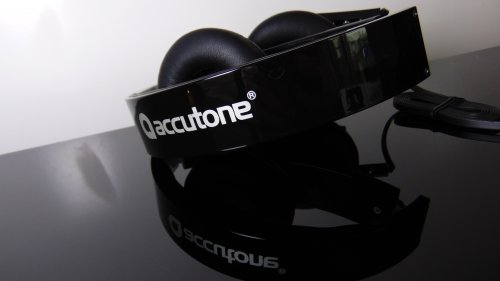 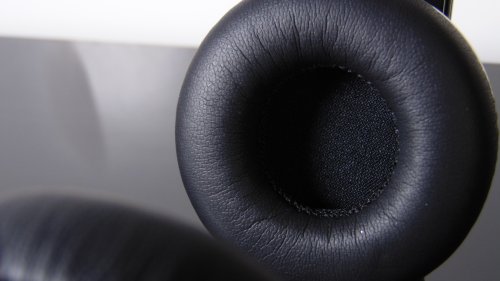 The in-line control unit fully supports Apple products and worked flawlessly with my 5th Gen iPod Touch. It was very responsive when changing volume and cycling through tracks. Plugged into my LG G5 only the centre button retained functionality but I could use it for answering and denying calls, voice command control, and nearly full audio control. Only volume and scanning through a track needed to be done via the phone itself.

Call quality was also pretty impressive. My voice rang through with callers loud and clear, doing a good job of filtering out unnecessary background clutter. Wind noise was persistent, however, it was not as intrusive as I've heard on other headsets. Overall a positive experience. 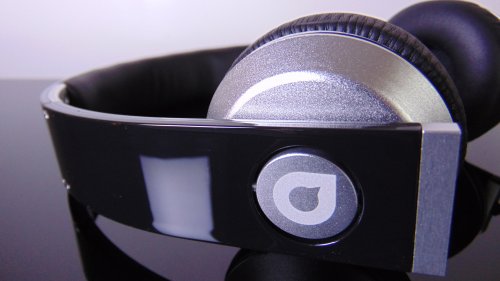 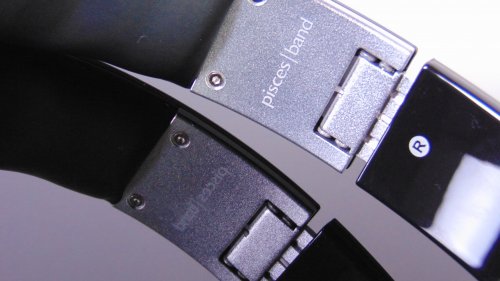 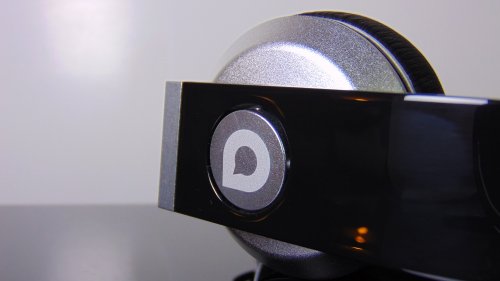 The Pisces Band is characterized by a warm, thick, mid-bassy signature. This isn't the type of signature that's going to please someone wanting a crisp, detailed, uncolored sound and as you would expect isn't suitable for critical listening. As a result, I opted not to go my usual route of critically analyzing the Band from the perspective of raw sound quality. Like the Pisces in-ear, that's just not what it excels at. Instead, I just tossed my player on random and used them as if they were my sole headphones. The test tracks listed at the end of this review are some of those I enjoyed most with the Pisces Band.

The Band's treble rolls off early. It's a smooth listen that is lacking in detail and clarity, but as a result is very easy on the ears even at uncomfortably high volumes. The mid-range can come across a bit stuffy and overly compressed, and as a result I kept vocal heavy tracks to a minimum. With too much going on the mid-range would be overwhelmed and coherence would dip. It worked great for media consumption though, excelling with commentary based Youtube videos and Podcasts. The Band's mid-bass focus gave it some real punch on bass-heavy tracks, but it lacked the extension for a truly visceral bass experience. Soundstage is quite small, and as a result there isn't much room for sound to move about in. Imaging, layering, and separation are all minimal. The Bands gives off the impression of a "wall of sound".

Overall the Pisces Band a pretty average sounding headphone. If you are the type of listener that doesn't consider the finer nuances of a headphone's presentation and instead simply listen to music for the enjoyment of it, you'll be perfectly content with the Band.

As an "audiophile headphone", the Pisces Band is lacking the sound quality needed to impress. However, this is a fashion can through and through so that's not who these were meant to draw in. As a headphone to accompany daily activity and look good in the process, they do a great job.

Toss them on with some upbeat background music when studying. They carry a tune well and won't distract you with bright treble, massive bass, or overly prominent vocals. Listen to them on your bus ride to work. Their signature works well in noisy environments and with their average isolation allowing you to hear announcements for your next stop.

While their design is inspired by the Beats era, it's unique enough to stand out and draw some attention. The quality plastic and aluminum build feels solid in-hand and pending you don't treat them horribly, should hold up well. The sturdy carrying case should help with that. In addition, they're quite comfortable for an on-ear, especially once the cushy ear pads have broken in.

While this really isn't the type of headphone that I would buy because I look ridiculous in anything stylish (you should see me in the Polk Audio Buckle...oh boy) I can see why their target audience loves them and why this has been a best seller for Accutone. Yes, their sonic qualities are a bit of a letdown, but in every other measure they're a truly enjoyable experience.

Since this is an older product, I hope Accutone has an updated replacement in the pipeline. The Pisces Band is a wonderful product but would benefit greatly from either a bump in sound quality, or a slightly lower cost of entry.